The Chameleon by Samuel Fisher review – witty, cerebral and completely in control of its story 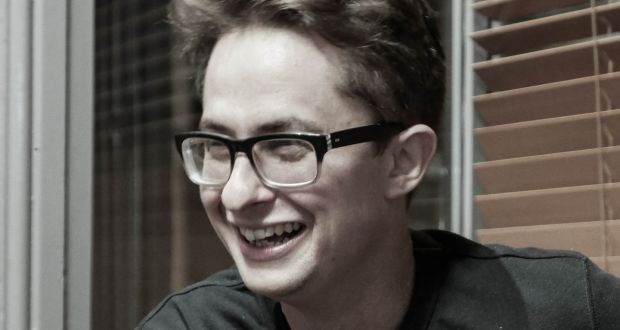 As well as being a new novelist, Samuel Fisher is also a founder of Peninsula Press

On the acknowledgements page at the end of The Chameleon, Samuel Fisher refers to his debut novel as a “strange little book”, an entirely accurate description. In recent years, fiction has provided us with some unexpected narrative voices : Death in Markus Zusak’s The Book Thief, a foetus in Ian McEwan’s Nutshell, various items of military artillery in Henry Parker’s Anatomy of a Soldier, but this one truly takes the biscuit.

For The Chameleon is narrated by the book itself, which has been granted a consciousness and lived for centuries, able to transform itself into any book it chooses at random, thus remaining with a particular human throughout his life, living in his satchel, pocket, or on a bedside table. Honestly, by the time I was a couple of chapters in and had figured the rules of this particular game, there was a part of me that was rolling my eyes and thinking, I’m getting too old for this sort of thing.

And yet, somehow Book won me over for the same reason that any narrator will: by being witty, cerebral and completely in control of its story. And while it would be easy to dismiss The Chameleon as an exercise in oddness, it ultimately succeeds by persuading the reader to ignore the impossible nature of the voice and focus instead on what it has to say.

The novel opens with Book looking down on his long-term reader, Roger, as the old man prepares to depart this life for the next. Roger’s daughter and granddaughter are by his bedside, and this brush with mortality, combined with a sense of impending grief, leads Book to recall some of the more dramatic moments they have shared over the decades. (Book cannot die, as such, but it does worry about being pulped or incinerated and was once buried with a previous reader, only to be released from his shallow grave by a resurrection man, come to steal the body.)

Fortunately, Roger has led quite an interesting life, having joined the civil service at a young age and been recruited as a British spy, based in Moscow at the height of the Cold War. Various shenanigans take place in an ice-cold Russia and Roger has dealings with chess-playing, defection-friendly Colonels while Book – dressed variously as Agatha Christie’s The Body in the Library, Virginia Woolf’s Orlando and Dostoevsky’s The Idiot – remains an observer, intrigued by the nature of global realpolitik while making sure that every time he changes his outfit, so to speak, Roger is out of sight. There are a few close calls, of course – when he switches from Lucky Jim to Pointed Roofs, he almost blows his cover – but these only add to the drama.

There’s even a brief touch of romance when, believing that he is the only one of his type in existence, Book is astonished to be left on a table near a copy of Alexander Pope’s Essay on Man, which insists on changing back and forth to Milton’s Paradise Lost. In an attempt at flirtation he too switches from the King James Bible to Le Dernier Homme. This, one must assume in Bookworld, is the equivalent of sexytime and, by the end of the passage, the lust pouring from the exhausted pages would put Fifty Shades of Grey to shame but it’s also a testament to the singularity and consistency of Fisher’s central conceit.

Ultimately, the reader’s enjoyment of The Chameleon will depend on how much one is willing to set disbelief aside and simply go with Book’s flow, a task that did not prove difficult for me. The whole thing is written with such a sense of cheerful eccentricity that it’s impossible not to be swept along and, if the familial relationships that Roger messes up and tries to repair over the course of his life are not always completely riveting, then this is a small flaw more than made up for by the charm of the narrator.

As well as being a new novelist, Fisher is also a founder of Peninsula Press, a small independent publisher whose list to date shows a predilection for innovative and experimental voices. It’s a partiality replicated in this wonderful, funny and audacious debut. Who knows what my copy of The Chameleon will turn into while my back is turned but I look forward to discovering whatever voice or artefact Samuel Fisher will throw himself into next.