Sheila O’Flanagan’s gem of an idea

In What Happened That Night the gemstones are characters too, like a type of mute Greek chorus observing men and women as they make a mess of their live 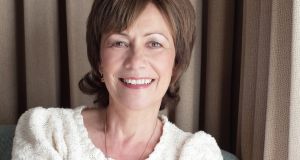 Sheila O’Flanagan: It was a conversation when I was choosing my wedding ring a few years ago that sparked the idea

One of the great privileges of being a writer is being able to ask diverse groups of people to share their expertise in the name of research. Fortunately most are extraordinarily generous with their time and their explanations. There is, of course, a fine line between adding a touch of realism to your book and writing a how-to manual; the problem for the author is distilling weeks of painstaking research into occasional sentences. Less is more when it comes to reams of information, but feeling secure in the accuracy of what you’re writing is important especially as there will always be readers ready to point out your mistakes.

In the quest for verisimilitude, I’ve been on a winter archaeological dig near Galway where I feared I might lose my fingers to frostbite, spent time in the control tower at Dublin airport where incoming and outgoing flights are treated like avatars in a video game, and channelled my inner Evelyn Cusack by preparing and delivering a (sadly unrealistic) long-term good-weather forecast at RTÉ. I’ve also talked at length to leaders of the feminist movement in California during the 1980s as well as drawing on my own experience of the financial services sector to add depth to my novels.

All authors inhabit the lives and worlds of their characters and this allows us to explore ways of thinking and acting that we wouldn’t even consider outside the pages of our books. Learning about a different industry or career choice can open your mind creatively as well as practically and it’s always a joy to talk to experts in their particular fields about what they do and why they chose to do it. As my lead characters are mainly female, I like to give them interesting careers and explore the difficulties of juggling those careers with their family responsibilities and emotional lives.

It was a conversation when I was choosing my wedding ring a few years ago that sparked the idea of using the world of “haute-joaillerie” (high class jewellery) as the backdrop to my latest novel. As I chatted to the jeweller about precious gemstones I was struck by the fact that their formation would have begun at a time when dinosaurs were roaming around the world. And I thought of how those stones, the diamonds and rubies and sapphires and emeralds, existed long before humans began to mine them out of the earth, and how they’ve been witness to every major event in our history as well as our own personal histories too. When all of us are gone, taking with us our successes, our failures and our spirits, the stones will still survive.

So with a novel that embraces three generations and has a wide cast of characters, it felt very appropriate to have precious gemstones charting the highs and lows of the Warren and Fitzpatrick families. The research process was certainly more glamorous than standing in the frosty Galway field, even if the stones had been around longer than the ancient brooch I saw being uncovered, and the more I learned about precious gems the more intrigued I became about them, especially the ones which are said to be cursed or have particularly bloodstained histories.

The Koh-i-Noor diamond, currently part of the Crown Jewels, can only be worn by women as its particular curse condemns male owners to know “all its misfortunes”; the famous Hope Diamond brought bad luck to everyone who owned it, and the notorious Black Prince’s Ruby has been followed by death and destruction since the 14th century. My favourite is the Black Orlov, also known as The Dark Eye of Brahma, which was stolen (as so many cursed stones are) from a sacred shrine. It was eventually cut into three pieces to successfully break the curse which had led to the suicide of many of its owners.

As I spoke to designers and jewellery makers, I realised that crafting any piece of jewellery is as much an art form as sculpting or painting. Classic influences in the past were often ancient motifs and emblems, with religious icons being particularly popular. The late Victorian era was characterised by memento mori, jewelled remembrances of deceased loved ones, and quite often dark stones such as onyx were used with locks of hair to create macabre brooches or bracelets.

The beginning of the nineteenth century ushered in a modern era, led by the growing dominance of the USA, and jewellery makers used the geometric lines of famous NY buildings as an influence for the art deco designs that began to proliferate. New techniques meant jewellers were able to replicate original pieces, and costume jewellery in bright colours became very popular as less wealthy people could afford to treat themselves to something that sparkled.

Modern design is an eclectic mix of old and new, and although the gemstones are often cut very precisely by laser, haute joaillerie is made by hand in jewellers’ workshops, so that each piece is unique.

Every jeweller I spoke to talked about the emotional bond they felt with the pieces they’d worked on, and one of the things I wanted to explore in my book was the dichotomy of working with and being surrounded by precious jewellery that you couldn’t possibly afford yourself. I wondered if it was difficult to know that it would always be other people who wore the finished product, or if simply creating a beautiful piece was enough reward in itself.

The characters and their personal stories are the main drivers of every one of my novels. In What Happened That Night the gemstones are characters too, like a type of mute Greek chorus observing men and women as they make a mess of their lives. But they are glamorous onlookers, pulsating with light and colour, keeping their own secrets as they have done in the billions of years until now and will do for billions of years into the future.
What Happened That Night by Sheila O’Flanagan is published by Headline Review at £14.99