Women in Irish theatre: no more waiting in the wings 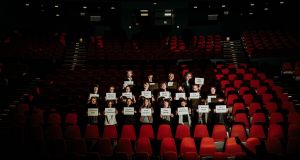 Some of the 100 theatre practitioners and academics who attended Irish Women Playwrights and Theatremakers in Mary Immaculate College. Photographs: Brian Arthur

These are just some of the Irish women playwrights whose names were up for grabs, printed on placards for a photo op at the recent Irish Women Playwrights and Theatremakers conference. Organised by Dr David Clare, Dr Fiona McDonagh and Aideen Wylde and hosted by the Department of Drama & Theatre Studies at Limerick’s Mary Immaculate College, the conference brought together theatre makers, scholars and activists to discuss the work of women in Irish theatre. What came out of these discussions was nothing short of extraordinary.

Extraordinary for the wealth of knowledge, the breadth of analysis, the impassioned engagement – yes. But most extraordinary, perhaps, for illuminating how women in Irish theatre have been so completely and violently erased. Over the three days of presentations and performances a new picture of Irish theatre began to emerge. In this picture Irish women are not only present in but central to the development of Irish theatre. Yet this centrality has been effaced through a systematic and selective amnesia that spans centuries and is just now beginning to be recalled.

Tilting the lens: reframing the Irish theatre canon
In his opening remarks, Dr Clare described three ways in which Irish women have been – to borrow Sara Keating’s phrase – “fired from the canon”. These were the lack of production (despite the high quality of plays), the lack of revivals (despite critical and commercial success) and the lack of publication (despite significant bodies of work).

While all three of these exclusions were investigated, over the course of the conference another theme emerged: that even when women’s work is seen, it is not seen on its own terms. In her plenary address Dr Cathy Leeney described how ways of looking and seeing in the theatre are gendered. Taking women playwrights seriously, Leeney argued, involves reading the signs used by the playwright as intentional choices. Yet work by women writers is often read as if they don’t know what they are doing. The transgressive is misinterpreted as messy, the purposeful assumed to be a mistake, and failure to conform to a masculine aesthetics is seen simply as failure. Leeney challenged us to re-evaluate our own biases in how we look at women’s theatre so that we might more clearly see.

In her own plenary address, Dr Melissa Sihra demonstrated this re-seeing to earth-shattering effect. Challenging the tokenistic placement of Lady Gregory, Sihra sought, “by tilting the lens, to re-establish a foundational status of Irish women in theatre”. In doing so she repositioned Lady Gregory as matrilineal origin point, a centrifugal force from which all Irish playwrights become her inheritors. After all, Sihra notes, it was Gregory and not Synge who first visited the Aran Islands, who first mastered Hiberno-English as dramatic language. It was Gregory more than Yeats who penned that central Abbey text Kathleen Ni Houlihan. It was Gregory who, in her more than 40 plays, experimented with absurdist forms and subversive humour, who pioneered the act of waiting as dramatic device in The Gael Gate.

If there has been a patriarchal colonisation of Irish theatre history, the restoration of Lady Gregory as key to the canon was a striking example of feminist resistance

What is so striking about this is that it is so obvious. Much of the evidence that Sihra presents has long been hidden in plain sight, obscured not because we did not know it but because we were taught not to see it. If, as Sihra observed, there has been a patriarchal colonisation of Irish theatre history, the restoration of Gregory as key to the canon was a striking example of feminist resistance.

Indeed, when we “tilt the lens” we begin to see all kinds of blind spots in Irish theatre. Dr Clare pointed out how Mary Balfour’s 1814 play Kathleen O’Neil acts as prototype for many of the tropes that would become Irish melodrama – yet it is Boucicault that is trotted out every year. Archives reveal telling traces of women’s work made invisible (as seen in Tricia O’Beirne’s study of second wave feminist playwrights in the 1980s) as well as the invisible forces working on women (as seen in Dr Ciara O’Dowd’s paper on Abbey actress-turned-director Ria Mooney who is remembered more as “the Abbey’s whore” than for her work with the legendary Eva Le Gallienne). Speaking on Máiréad Ní Ghráda, Dr Fergal Whelan called An Triail a play whose true value is hidden in plain sight, flattened by the very Leaving Cert placement that has made it the most-read Irish language play. This idea of hidden in plain sight was not restricted to lost histories, but resonated powerfully with contemporary Irish women theatre makers as well.

This feeling of standing on the wrong side of a pair of locked doors was shared by many of the practitioners who spoke at the event. Several expressed how frustration with sexist treatment was often kept in check by the fear of never working again. Sarah-Jane Scaife highlighted the bullying and discrimination faced by those who, before #WakingTheFeminists, were brave enough to speak out in male-dominated rehearsal rooms and production meetings.

Katy Hayes, whose Glasshouse Productions staged women’s work in the 1990s, wondered if women’s activism at the time actually hurt their agenda as the resultant blacklisting meant they could not effect change from within. Playwrights shared stories of commissions that were never produced based on excuses of weak second acts or unconvincing characters, receiving dismissal instead of dramaturgy. Many weathered a storm of sexist and belittling comments – nevertheless, they persisted.

Ursula Rani Sarma, who has worked with a number of established theatres in the US and Britain and whose plays have won her critical acclaim and prestigious awards, remains virtually unproduced in her own country. In her interview she encouraged young women theatre makers to take risks while they can in the safety of the university setting. “Theatre will never love you as much as you love it,” she quipped.

Later that day, #WakingTheFeminists researchers highlighted some of the most striking numbers from their report Gender Counts, which had been released earlier that week. Data showing that the four highest-funded Irish theatre companies have the lowest female representation proved that what had long been felt was statistically true: women have been left out in the cold by Irish theatre.

Expanding understandings of Irish theatre
If these three days felt like a watershed moment it was because not only was the focus on women, but this focus opened up broader avenues of inclusion. Intersectional approaches moved the conversation beyond gender to address race, disability, language, age, region and geography. As Dr Charlotte McIvor argued, Irish theatre and Ireland itself “should always be already defined as the diverse potential constituency they have become”.

Many advocated for a diversity of roles as well as representations. Dr Siobhan O’Gorman championed the phrase “theatre makers” as one that challenges the gendered hierarchies that often restricts understandings of Irish theatre to “white guys who wrote plays”. Research by Dr O’Gorman and Chris McCormack, on scenic designers Monica Frawley and Tanya Moiseiwitsch respectively, challenged the hegemony of the playwright and director as the only makers of meaning. And much of the contemporary work spoken about by scholars such as Kate McCarthy, Ciara Murphy and Brenda O’Connell is devised or collaborative, eschewing hierarchies altogether.

While the breadth of research was impressive, equally refreshing was the depth of investigation. To have two papers on the plays of Mary Manning and an entire panel dedicated to the work of Teresa Deevy was a luxury not often enjoyed by those studying women playwrights, who are often limited to plot summaries for an unfamiliar audience. And yet how many dedicated panels, conferences, summer schools and college courses are there for writers such as Yeats, Synge, Beckett?

Lady Gregory, whose work eclipses that of her peers not only by volume but – as Dr Anna Pilz demonstrated – through number of productions and critical and box office success, has only a single monograph dedicated to her work as a playwright. In the recently published Oxford Handbook of Modern Irish Theatre she gets a mere eight lines for her work with the Abbey while Wilde, Friel and Murphy get two dedicated chapters each.

The Irish Women Playwrights and Theatremakers Conference was an important step toward recuperating voices that have long been silenced. But it is only by showing up for women’s work – as both audiences and as researchers – that we will keep them from being silenced again. After all, as Dr Sihra concluded, in order to be forgotten we must first be acknowledged. And we refuse to be forgotten anymore.
The Irish Women Playwrights and Theatremakers Conference was held at Mary Immaculate College, University of Limerick, from June 8th-10th. Justine Nakase is a PhD candidate in drama, theatre and performance at the National University of Ireland, Galway, where she is an Irish Research Council Scholar