Posters from the edge: Jack Kerouac’s ‘On The Road’

To mark the 60th anniversary of the Beat classic, a travel website has reimagined the book’s pitstops in retro poster format 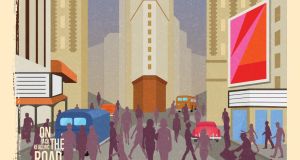 Sixty years on from On the Road being published, the most famous Beat text may be forgiven for struggling to tap into a millennial traveller’s ideals. Jack Kerouac and his entourage carved out a domestic path less trodden with an assurance that every winding road led to somewhere, while Gen-Y Westerners enjoy cheaper, more open access to the wider world that budding beatniks could have only dreamt of.

At the expense of modern travelling conveniences, the journey often takes a back seat, with eyes instead more focused on exactly where they are headed to. But it is the journey-stage that forms the crux of Kerouac’s storytelling – the intended locations of the 1957 novel’s many excursions are often nameless until we arrive there: “There was nowhere to go but everywhere, so just keep rolling under the stars”. Despite how a traveller’s mindset may have changed over time, though, a yearning for impulsive thrill-seeking can still be evoked by turning just a few pages of the beat poet’s spontaneous prose.

Those hoping to awaken their adventurousness through the novel’s semi-fictional protagonist, Sal Paradise, will also be looking upon an America that time has forgotten. On the Road declares “the road is life”, yet, somewhat ironically, it was not long after its publishing that a golden age for US roadtrip travel began to disappear with the arrival of interstate highways. Like a reader skipping from New York, where Sal’s first journey begins, straight to Mexico City where the story nears its end, these new highway routes bypassed many of the smaller towns and communities where Beat writers once encountered some of their stories’ more inspirational moments.

But with only Kerouac’s romanticised America to consider, Sal was ready to wander: “All I wanted to do was sneak out into the night and disappear somewhere, and go and find out what everybody was doing all over the country.” Here are 10 of the major cities which we encounter on the road:

Captivated with Dean Moriarty – the character based on fellow Beat writer, Neal Cassady – Sal hitchhikes and buses from New York to Denver, where he meets with Dean early on. Approaching the Colorado capital, Sal observes: “And the new truckdriver was as crazy as the other and yelled just as much, and all I had to do was lean back and roll on. Now I could see Denver looming ahead of me like the Promised Land...”

In Dean’s hometown, he and Sal indulge in familiar pastimes, namely partying, drinking and taking drugs. On the Road is riddled with enchantment for Western cities such as this, while Denver acts as a key mid-way point between New York and San Francisco throughout the story.

Past Denver, Sal sees what he describes as “the greater vision of San Francisco beyond, like jewels in the night”. Here, Kerouac’s protagonist spends his time working as a night-time security officer. He and Dean also return on their second journey to enjoy the city’s thriving African-American jazz scene.

The gloomy old inn over the smoky rail yard where Sal winds up in Des Moines is soon forgotten after his attention is stolen by the “beautiful bevies of girls everywhere”, bringing him to declare that “the prettiest girls in the world live in Des Moines”.

Tim Gray, Ray Rawlins and Babe Rawlins drive Sal up through the interior of the Rockies and into Central City. The group immerse themselves in opera, the town’s main attraction which helped to rejuvenate what was once a ghost town. “It was a wonderful night,” Sal says. “Central City is two miles high; at first you get drunk on the altitude, then you get tired, and there’s a fever in your soul.”

Though his stay here is brief, Salt Lake City is special for being the birthplace of Dean Moriarty (and the real-life Neal Cassady). Sal’s description, “a city of sprinklers” has stood the test of time.

Led by the hand of his girlfriend, Terry, to the tune of local jump blues bands, Sal enjoys a stroll down Central Avenue “which is the colored main drag of L.A. And what a wild place it is, with chickenshacks barely big enough to house a jukebox and the jukebox blowing nothing but blues, bop and jump.”

With an air of sadness, Sal reflects on his return to where the journey started: “I had travelled eight thousand miles around the American continent and I was back on Times Square, and right in the middle of a rush hour, too, seeing with my innocent road-eyes the absolute madness and fantastic hoorair of New York with its millions and millions hustling forever for a buck among themselves, the mad dream – grabbing, taking, giving, sighing, dying, just so they could be buried in those awful cemetery cities beyond Long Island City.”

Pulling into Chicago at the wheel of a borrowed Cadillac, Sal and Dean cruise from bars to clubs in search of thrills. Part of their time is spent in the historic Loop District, that consists of “screeching trolleys, newsboys, gals cutting by, the smell of fried food and beer in the air, neons winking”.

Sal and Dean spend an evening wandering through San Antonio’s “fragrant and soft” air, where the streets are “dark, mysterious, and buzzing”.

Both Sal and Dean sense that this is where their journey ends, from the moment they lay eyes on Mexico City’s giant sprawl, to them walking dreamily through its frenzied streets: “We’d made it, a total of nineteen hundred miles from the afternoon yards of Denver to these vast and Biblical areas of the world, and now we were about to reach the end of the road.”