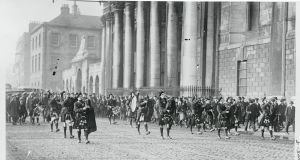 Beggars Bush Military Barracks (formerly the headquarters of the Auxiliary Police) was handed over recently to the Irish Republican Army, amidst scenes of great enthusiasm. 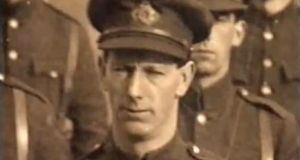 Book Title:
We Bled Together: Michael Collins, The Squad and the Dublin Brigade

In recent years, Dublin during the revolutionary era has been subjected to intense study, including in the books by Pádraig Yeates, A City in Wartime, A City in Turmoil and A City in Civil War, an extraordinary trilogy and feat of research. More recently, John Dorney’s The Civil War in Dublin highlights the ongoing preoccupation with documenting the city as a hotbed of revolutionary turmoil. Dominic Price, who previously authored an account of the revolutionary years in Mayo, has chosen to focus on the Dublin Brigade of the IRA. In 1919, Michael Collins created two Special Duties Units from this brigade, which ultimately merged to form his “Squad”; its members were charged with the task of immobilising British intelligence through bloody assassinations, a major component of the War of Independence.

This book is dedicated to “those who gave their lives for Irish freedom” and Price considers the story of the Squad to be both “inspiring and shocking” as “it reveals the very best and also the very worst that human beings are capable of”. Such clichés do not inspire great confidence; nor does the rambling introduction, which gives a potted post-1916 Rising narrative and then returns to the Boer War and the first Home Rule Bill in 1886. We are also told that Eamon de Valera’s height of six feet “gave him a physical presence that quite literally towered above others”.

Price makes some bizarre and surely simplistic generalisations: the Irish intelligence officers of the early 20th century, we are told “had grown up in a world of apparent certainty and clear, guiding moral Christian principals (sic). People understood right from wrong, lived by the Ten Commandments and applauded honesty, loyalty and integrity. The officers’ activities turned the traditional sense of morality completely on its head. They were to engage in lying, stealing, threats, intimidation, and executions and murder.” Price is rightly keen to emphasise the strain and loss this type of work created, but to suggest they grew up in such purity is far fetched. As historian Patrick Maume has characterised it for example, the revolutionary sentiment manifest during this period grew from a long-standing separatist sub-culture which was given credibility by the petty repressions, snobberies, hypocrisies and corruptions of early 20th-century Ireland

Price is on more comfortable ground in dissecting the Dublin Brigade’s emergence, structure and operations and the extent to which Dublin, with its warren of streets and hideouts, was suited to the clandestine operations of explosives-makers and assassins. He documents the various attacks and retreats in admirable detail, using a good variety of archival material. The ugly realities and consequences of the Squad’s activities are not elided, including the effort these patriots expended in seeking out a man who lived on the Strand Road who had been heard bad-mouthing one of them: “He was old and sported a fine beard. Michael Brennan used a pair of horse clippers to shave off the beard while the others held him down. The women of the house were in great distress. After his ordeal, the old man was told ‘to watch his mouth in future’”.

As Nevil Maccready, Britain’s general officer commanding in Ireland in 1920 saw it, his troops were engaged in a very different kind of warfare than was the norm, as their IRA enemies moved around in civilian garb: “they are likely to be attacked at any moment by people who pretend to be on good terms with them or who seem to be carrying out their daily activities”. Price gives due attention to British “infighting” about methods and personnel; by November 1920 there were perhaps 97 secret service officers in Dublin and as the fighting intensified there were constant house raids. There is a detailed recounting of the shootings on Bloody Sunday but the assertion that “there were a few cases of mistaken identity” is not adequately elaborated upon.

Some of the assertions of Squad members are challenged. Paddy O’Daly, who took over command of the Squad in 1920, told the Bureau of Military History in 1949 that “no man was shot merely for revenge”, but as Price recognises, O’Daly “certainly had a vindictive streak and frequently acted upon it”. Oscar Traynor, who became O/C of the Dublin Brigade, elided the issue of civilian casualties: regarding the explosion of grenades, he maintained there was “a signal to take cover, an art in which the citizens soon became expert, thus leaving the Volunteer soldiers and the enemy troops shooting it out in semi-isolation”. This was nonsense, as evidenced by the contemporary reporting of civilian casualties. In May 1921, there was fear that a suspected informer whose shooting had been botched and who was taken to Jervis Street Hospital would compromise the Dublin Brigade. Two volunteers entered the hospital, “placed him on a stretcher and carried him outside into the street where they shot him through the head a number of times, the coup de grâce being a bullet through the forehead” an action said to have “outraged” IRA GHQ.

Price’s focus extends to the Civil War and this generates some of the strongest material in the book. In early 1922, Paddy O’Daly and his colleagues formed the nucleus of an expanded unit, styled the Dublin Guards, within the National Army, organised by the pro-Treaty Provisional Government. They were looked upon and saw themselves as an elite; General Emmet Dalton, director of military operations in the National Army was told to rein them in or they would “corrupt the Army”.

In May 1922, the Dublin Guards were reconstituted as a brigade under the command of O’Daly; he led them to Kerry and the extent of the corruption feared by Dalton was laid bare: “what happened here at the hands of O’Daly . . . would define the Irish Civil War”. O’Daly was subsequently appointed GOC of the Kerry Command and the brutality he oversaw was horrific. Numerous appalling deeds are recounted including the case of Republican column commander Tim Lyons. Stuck in caves at the bottom of a cliff, he agreed to surrender and “as he climbed a rope lowered by the National Army above, it was cut and he fell. As he lay dying below, he was used as target practice by the Dublin Guards”. Illegal killings multiplied and O’Daly “must have thought he was invincible”.

How did these men live with the “peace” that followed? Physical and psychological scars endured against a backdrop of an often-cold bureaucracy when it came to military service pensions, and one of the advantages of new archival material, well exploited by Price, is that some of the post-war lives can be traced comprehensively. James Dempsey, for example, a member of the E Company of the 2nd battalion of the IRA and a member of the Dublin Guards, was shot in the left wrist in 1916, suffered shell-shock in the Four Courts explosion of 1922, lost an eye and was captured in action against the IRA during the Civil War. The military doctor examining Dempsey as part of his pension application concluded: “General condition good. Is obviously a hypochondriac”. Others were fixed up with jobs as a reward for service or retreated to their former working lives or emigrated and spoke little if anything about their experiences.

In May 1922, Michael Collins wrote to Mick McDonnell, the O/C of the first Dublin Brigade Service Unit in 1920, who had what we would refer to today as post-traumatic stress disorder symptoms (what was referred to by a contemporary doctor as “extreme mental and nervous strain”). McDonnell had moved to California, and Collins assured him “all the old bunch are in good form . . . keep on at the fruit and the sun until you are all right”. He fared better than his former colleague Paddy Flanagan, who died of a brain haemorrhage aged 39 in 1935 and his family became dependent on the White Cross. Flanagan’s widow was turned down for a pension because his death was deemed to be “due to diseases not attributable to service”. She was eventually granted a pension in 1962, a reminder of the longevity of the battles for service pensions and material survival. Price’s tone changes in confronting these grim realities and he does not ignore the extent to which the conflict was “brutal. War is little else”.