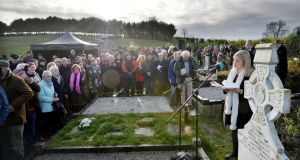 Novena of poems: Caitríona Ní Chléirchín reads “In Memory of My Mother” at the graveside of Patrick Kavanagh in Inniskeen, Co Monaghan, as part of a tribute to mark the 50th anniversary of his death. Photograph: Alan Betson/The Irish Times

It was “a day for the long johns”, as one of the older men present said to his neighbour. Nevertheless, 50 years after Patrick Kavanagh’s death on November 30th, 1967, a crowd of several hundred braved wintry temperatures in Inniskeen churchyard on Thursday for a simple but moving ceremony to commemorate his life.

With religious overtones, the tribute centred on a novena of Kavanagh’s poems, read by nine of his fellow writers. The sequence began, inevitably, with Stony Grey Soil, in a resounding recital by local man John McArdle.

That poem was a product of Kavanagh’s love-hate relationship with the little hills of Monaghan and, if anything, it seems to lean towards the hate end of the spectrum. But as recreated by McArdle, with some of those same hills providing the backdrop, the effect was affectionate, and spine-tingling.

Only the cheerful voice of the man himself  broke the spell

In Memory of My Mother, with its opening lines “I do not think of you lying in the wet clay/ Of a Monaghan graveyard” also brought tears to a few eyes, when recited first in Irish, then English, by Caitríona Ní Chléirchín.

And so it contained, through readings by Eugene McCabe, Patrick McCabe, Evelyn Conlon, Mary O’Donnell, Brian Lynch, Tommy McArdle, and Theo Dorgan, while Tiarnán Ó Duinnchinn added a lament on the uilleann pipes.

Master of ceremonies Art Agnew had asked those attending to refrain from applause out of respect to the surroundings. So only the cheerful voice of the man himself – as recorded in a 1960s RTÉ broadcast about his life and work, and relayed by speaker from the old church – broke the spell.

But with the outdoor ceremonies over, the grateful crowd then moved into the much warmer interiors of the church, now the Patrick Kavanagh Centre, for speeches.

Guest of honour there was supposed to have been local TD and Minister for Arts Heather Humphreys. That was before she was detained in Dublin due to “circumstances beyond her control”, as indoor MC Larry McDermott said, to laughter.

Instead it was her planned guest for the day, Scotland’s culture secretary Fiona Hyslop, who topped the political bill, although the audience also included former British Labour MP Clare Short, whose parents came from either side of the nearby Border, namely south Armagh and north Louth.

Reared in the Robert Burns homeland of Ayrshire, Hyslop had been due to have a mini “culture summit” with her Irish counterpart in the nearby Agnes Burns Cottage, which was once home to the Scottish poet’s sister. A senior civil servant had to deputise at that too.

Regardless, Hyslop spoke warmly of her first visit to what she called “beautiful Oriel” – an ancient kingdom that included Monaghan as well as bits of Armagh and Louth – and promised helpful advice from Burns country on a major renovation of the Kavanagh centre, due to begin shortly.

The speeches done, only one tribute remained to Inniskeen’s famous son. Played by a lone piper, The Dawning of the Day had earlier welcomed visitors to the churchyard. Now it was the turn of Armagh singer-songwriter Ben Reel to bring the ceremony to a close by signing it with the lyrics Kavanagh added: Raglan Road.

The Crown should carry a warning that it is a fictionalisation, UK minister says
4