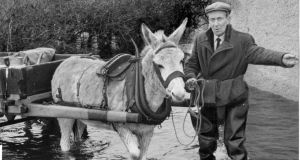 December 31st, 1959 : a farmer leads his donkey and cart through the flooding in Athlone. Photograph: Kevin McMahon

We borrowed the loan of Kerr’s ass
To go to Dundalk with butter,
Brought him home the evening before the market
And exile that night in Mucker.

We heeled up the cart before the door,
We took the harness inside -
The straw-stuffed straddle, the broken breeching
With bits of bull-wire tied;

The winkers that had no choke-band,
The collar and the reins . . .
In Ealing Broadway, London Town
I name their several names

Until a world comes to life –
Morning, the silent bog,
And the God of imagination waking
In a Mucker fog.

The first rude, deliberately provincial word in Patrick Kavanagh’s masterpiece Kerr’s Ass occurs in the title. It’s repeated in the first line: “We borrowed the loan of Kerr’s big ass”, where there is a back-formation out of Irish, a phrase which is normal in Irish speech, but in print could look clumsy to an outsider, who might regard borrowing a loan as tautological or a malapropism. Again “ass” can mean “bum” – it does so exclusively in American English – so the appearance of rude provincialism is emphasised by the first line.

Kavanagh wants to put oral convention in conflict with conventional standard – to set up a tension between spoken Irish English and correct printed English. The long vowels in “we borrowed the loan” have an almost elocutionary plumminess against the short, jabby vowel sounds, and the guttural, plosive and susurrus in Kerr’s big ass. Kavanagh wants to raise Mc Gonagall’s homemade ghost – he’s being cute – and he wants the Scotch-Irish surname and its k sound to become nodal. So that k is replicated in exile, Mucker, Cart, broken, winkers, choke, collar and Mucker. The softer guttural g in “big” is also replicated – it adds density to k – till the two come together in the triumphant, final phrase “Mucker fog”.

The other rude word is “Mucker”, a placename which derives from the Irish “muck” for “pig”. Mucker is a place where pigs are bred in abundance, but it is an ugly name, and the inhabitants of Kavanagh’s Mucker agitated unsuccessfully for it to be changed to “Summerhill”.

If k or kuh is a nodal sound in the poem, so is uh which we first hear clearly in “Dundalk”, which means “fort of Dealgan”. It is then furred and aspirated in “butter”, or “buhter” or “buhtur” (Kavanagh on tape pronounces “bullwire” as “buhllwire”). This uh sound is an ugly internal rhyme – is part of the poem’s rudeness or deliberate naiveté – and Kavanagh offers an immediate half-rhyme in the next line, where “him home” trips the line up slightly.

The exilic theme begins in the fourth line, but is immediately denied by the parochial Mucker, which bogs it down in the mud, because “muck” also obviously means muck, clay, clabber, even as “ass” could imply shite. The two i sounds in “exile” and “night” are cancelled by “Mucker”. But Kavanagh wants to introduce a long ee sound, which he doubles in “we heeled”, a slightly clumsy consonance. Then he repeats “we” and brings the i sound back with “inside”. He wants to put “we” and “i” in relation to each other, maybe to merge himself with the parochial and the communal, maybe to distinguish himself from it.

Now he lobs a tongue-twister at the reader: “The straw-stuffed straddle, the broken breeching,” the long ee positively squeaks there and becomes ugly, like a breach in nature. Also this is the moment when the story-teller becomes particular and technical – he wants to hold our attention by boring us. And he adds the extra detail of the bull-wire, which has the effect of bringing a powerful animal slightly into the picture and intensifying that uh sound both by repetition and association. The i sound is put under pressure here – there’ll be no escape from this ugly place, a place he’s tied to. And he adds yet more detail which increases the claustrophobia, even though the choke-band is notionally not there. This is the cunning naive imagination patiently detailing the facts – the recycled objects that make the harness and the poem. From the point of view of the literary theorist, Kavanagh is a bricoleur here – a secondhand dealer who if he were Yeats would recycle sea green slates and old bits of metal.

Then the long clean ee sound comes back as Kavanagh shifts into perfectly modulated, proper English:

In Ealing Broadway . . . London Town
I name their several names.

There’s the ghost of “healing” in “Ealing”, and this crosses the gap that the three dots make, like hands across the Irish Sea. To adapt Muldoon, he is meeting the English. He is putting the prominent phrase “London Town” wittily into the picture, as though it’s a big village not a city – again this is a vernacular phrase which plays against the higher style of these two lines.

But the language is heightened, ritualistic, proper: “I name their several names.” Like a chant, the line elevates not straddle breeching bull-wire winkers choke-band, but the primal act of naming objects which “their” makes human, creaturely. That “sever” in “several” is over-ridden by another act of joining, of participation, as the penultimate stanza flows effortlessly into the last stanza and repairs the broken breeching. The movement is now open, revelatory, the dash doesn’t introduce the deliberately clumsy “straw-stuffed straddle” or “broken breeching” but “Morning, the silent bog”, a cadence which calls back “Ealing Broadway, London Town.”

The word “bog”, though, does call back “butter”, “broken breeching”, “bits of bull-wire”, and it carries a faintly derisive tone and meaning – asses, after all, are placed on bogs, on jakes. Then, in a version of Coleridge’s “infinite I AM”, the God of imagination is shown waking – the present participle at the line-end creates a pause and sense of expectation, before the final line which combines bathos with elevation and renewed devotion to place.

We notice “in” three times in the last two lines, which helps emphasise the subject of dwelling-in-the-world – what is sometimes called the ontological subject. There is a slight pause before “waking”, which gives power and strength to the verb. Also “In a Mucker fog” is trochaic – it picks up the trochee “Morning” and this imparts an elevated, ritualistic tone. Even as “fog” and “bog” set up a counter-bathos so that the poem at the end seems to both rise and sink. The words “under”, “butter”, “bog” and “fog” all create a sinking squelchiness, which is the opposite of the dry factuality of the straddle, breeching, bull-wire. Somewhere in “Mucker fog”, there could ever so slightly be a trace of “motherf**ker”, and certainly “Mucker” at some level implies the dismissive “f**ker”.
Tom Paulin is an award-winning poet, critic and GM Young Lecturer in English Literature at Hertford College, Oxford