Portrait of a reader: A short history of books in paintings 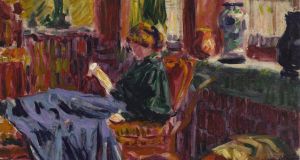 Artists, like writers, are knowing people. They look around and notice what is truly important about what it is to be human. For 2000 years, they have recorded an epic story of a seemingly humble object: the book. Even today, they do not, on the whole, seem moved to depict computer screens, despite the latter’s role as the furniture of our time. For once the codex – folded pages held together, with text on both sides of the sheet – had been invented at the beginning of the Christian era, there existed a virtually unimprovable, practical, portable, convenient and versatile form able to encompass all human dreams.

You can see a book on folio 291v of the Book of Kells, in which Christ holds a red binding with decorations provided by twilling, a weaving that produces parallel ribs. You see one again over a thousand years later in John Butler Yeats’s painting of the young WB, bearded and behatted, comfortable in a basket chair in the somewhat out-of-control garden in Bedford Park, where the poet wrote The Lake Isle of Innisfree. The elder Yeats also painted the enchanting American Mary Lapsley Caughey in 1916, with book on lap, a work now in the National Gallery of Ireland.

Laps were made for books. Roderic O’Conor, in many works, from Breton Girl Reading to Girl with Red Waistcoat, showed that the compelling element in portraits, whether showing comfort or engagement, reflection, relaxation, was the book on the lap; if the desire was for solemnity, as it was in Louis le Brocquy’s Girl in Grey, the book in the same position provided it. It was left to James Joyce to break ranks, shown instead by Jacques-Emile Blanche in Paris in 1935 with cigarette in hand, surrounded by books on the table behind him.

Artists were intimately connected to books from the beginning for the obvious reason that, before printing, they made them. They were not called artists because until the Renaissance, despite occasional voices arguing that art and literature should have parallel status, the people who created some of the most exquisite books of all times were largely seen as anonymous artisans.

Although the invention of printing in the mid-15th century did not fundamentally change the form of the book, it did hugely increase its dissemination. It was a printed book, Vasari’s The Lives of the Most Excellent Painters, Sculptors and Architects – more than a thousand pages of biographies of artists, with their woodcut likenesses in the second edition in 1568 – that changed the status of artists for ever. Lives was fun, captivating, informative, brilliant propaganda for artists everywhere. And it was a book.

Writers were celebrities; now artists could be, too. The relationship between them has never been resolved. Leonardo suggested that poetry (or music, or history) could never match painting: the visual impact of art was instant, and yet its contemplation knew no limit. But centuries later Charles Lamb was still stridently arguing that the immediacy of art stifled interpretation; once you saw, in a painting, Falstaff as “Plump Jack” or Othello as “a Blackamoor”, you acquired immoveable and unsubtle preconceptions.

Although many artists turned to literature for inspiration – in Britain and Ireland more than 2000 paintings of scenes from Shakespeare have been counted from the late 18th century to 1900 – and more than a few writers, Victor Hugo and Kafka among them, were quietly considerable artists or focused their novels on paintings (such as Wilde’s Dorian Gray or Tracy Chevalier’s Girl with a Pearl Earring), it was Van Gogh who provided the most inspiriting view of the two arts.

In one letter, as a young man, he explained his “irresistible passion for books”, as essential to him as his daily bread. Later he found something of Rembrandt in Shakespeare, or of Bunyan in Millet: “One man wrote it or told it in a book, another in a painting.” Of his many paintings – very many – showing books, there is one still-life of an open Bible, symbol of his rejection of his father’s strict faith, juxtaposed with a small and battered copy of Emile Zola’s La Joie de Vivre, a world in which writers, as Van Gogh said, “paint life as we feel it ourselves”. Alas, this being Van Gogh, there was no more joy in Zola’s novel of malice, betrayal and suicide, albeit with a brave attempt by the central character to keep hope alive, than in Christ’s suffering and rejection in Isaiah.

The process by which books became ubiquitous in our lives and in the work of artists is a fascinating one. By the late 18th century Luise Mejer wrote that in Holstein “people are stuffed with reading matter in the same way that geese are stuffed by noodles”. This was just the beginning of the spread of books from aristocracy and clergy to middle classes to working classes. The first of these transitions was easier. Writers of fiction could put themselves in an almost tangible relationship to their readers because the middle classes could recognise themselves while being entertained.

Those lower in society had to wait for education. But eventually Hubert von Herkomer was able, in 1878, to paint early evening in a workhouse, incomplete without a book or two (on a lap), or Winslow Homer, the previous year, to capture the spellbound attention of three black children being read to in Sunday Morning in Virginia.

Books were painted by the railway or on the beach (by Manet), by the bathside (by Alfred Stevens), or with their readers in the nude (by Robert Delaunay), or in a hammock (by Sir John Lavery) – or in the brothel (by Munch). Cats were taught to read (by Jan Steen), or monkeys to learn that in fact there were things other than books (by Chardin). Picasso, Matisse and Léger continued the parade.

Is it about to end? Not a chance. As users of that soon-to-be-obsolete piece of technology, the iPhone, will find, artists and writers display a creativity that speaks to something deeper in all of us than technology can supply.

Jamie Camplin is the former editorial director and managing director at Thames & Hudson. He is the author of Books Do Furnish a Painting, 1914 The King Must Die and The Rise of the Plutocrats: Wealth and Power in Edwardian England