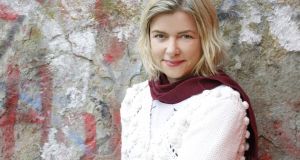 Danielle McLaughlin: “I’m a new writer, but not a young writer, and so it’s fortunate for me that the Windham-Campbell awards recognise the work of writers of all ages!”

Danielle McLaughlin has become the third Irish writer in four years to win one of the world’s most lucrative literary awards, the Windham-Campbell Prize, worth $165,000 (€146,000).

The former solicitor from Co Cork, who only took up writing seriously 10 years ago at the age of 40 when illness forced her to stop practicing law, received the award at a ceremony in London’s Stationers Hall during London Book Week along with seven other winners including US author Rebecca Solnit.

The judges’ citation read: “Danielle McLaughlin’s short stories capture the beauty and brutality of human relationships, imbuing them with near-magical qualities rooted in the details of everyday life in a manner both wry and resonant.”

The prizes, administered by the Beinecke Rare Book & Manuscript Library at Yale University, were established in 2013 with a gift from the late Donald Windham in memory of his partner of 40 years, Sandy M Campbell. Judged anonymously, the prize has no submission process, public longlist or shortlist, and so writers are unaware that they are in the running. The prizes are among the world’s richest – the Man Booker Prize is worth £50,000 and the International Dublin Literary Award €100,000.

McLaughlin’s debut short story collection Dinosaurs on Other Planets was published in 2015 by Stinging Fly Press and subsequently in Britain and the US.

“This is not a debut in the usual sense: a promise of greater things to come,” Anne Enright said of Dinosaurs.... “There is no need to ask what Danielle McLaughlin will do next, she has done it already. This book has arrived. I think it will stay with us for a long time.” Last year, she edited the anthology Counterparts, a synergy of law and literature published by Stinging Fly in aid of housing charity Peter McVerry Trust. She is writer-in-residence at University College Cork and is working on more short stories and a novel. Together with Madeleine D’Arcy, she co-runs Fiction at the Friary, a free monthly fiction event in Cork.

Speaking ahead of the ceremony, McLaughlin said: “I’m a new writer, but not a young writer, and so it’s fortunate for me that the Windham-Campbell awards recognise the work of writers of all ages! It’s never too late for anybody to start writing and human beings don’t stop having stories to tell, just because we’ve got older.

“I was 50 in January, but didn’t want a party, and so my husband and kids planned a trip away instead. We were staying for a few days at the Steelworks Hostel in Copenhagen (a fab hostel, by the way, it even has a hostel swimming pool) when I got the news. I was astounded, totally gobsmacked, when I got that phone call. It was so unexpected, I had no idea I was even being considered for an award. I don’t remember exactly what I said on the phone, but I do remember that I was standing outside a restaurant and I was extremely inarticulate. I remember thinking afterwards that it was just as well it wasn’t my conversational abilities that were under consideration.

“That kind of money rarely comes the way of a writer of fiction, especially for a collection of short stories. I am so hugely grateful to Donald Windham and Sandy Campbell for their generosity, for believing so fervently in the value of writers and writing. The award provides the kind of financial freedom that will allow me to keep working on projects that don’t make any money, but that I believe very strongly in. And on a practical note, I have three kids and a mortgage, so it’s good to be able to contribute to the family finances while working as a writer.

“Writing is a mid-life career change for me. For many years I worked as a solicitor. I became ill quite suddenly in 2009 and had to stop practice. It was while I was ill that I began writing and I haven’t returned to legal practice since. In recent times, perhaps because I was working with a lot of other Irish lawyer-writers on Counterparts, an anthology themed around law reports and published by the Stinging Fly Press in aid of Peter McVerry Trust, I began to feel a pull back towards law.

“Law was my dream for years, since I was a teenager. I studied and trained and worked for years and then suddenly it was gone. I think perhaps it was the creative void that it left that sent me down the fiction road – I do think that law and writing have a lot in common. It will be 10 years this year since I last practiced law and I was going through a phase of questioning what I was doing with myself, in career terms. And then this award happened. It’s an extraordinary affirmation.

“I’m just finishing the edits on a novel called Retrospective. It began back in 2012 in a writing workshop given by Nuala O’Connor at Waterford Writers Weekend. I can still remember the chalky feel of the prompt – a piece of broken delph – in my hand. It’s set between Cork city and west Cork and the main character is a fortysomething woman whose past intrudes on her personal and professional life at the worst possible time in the guise of her dead friend’s son and his father. It’s about infidelities and betrayals, and about hope and friendship also.

“I also have a number of short stories at various stages of construction and am delighted to have a story featured in the Faber anthology Being Various edited by Lucy Caldwell, out in May.

“I’m currently writer in residence at University College Cork, something I’m enjoying hugely. Together with Madeleine D’Arcy, my co-founder at Fiction at the Friary, I’m part of a collaboration involving writers in direct provision in Cork and the English department at UCC. We have a series of workshops under way and are writing towards a showcase event to be held at Fiction at the Friary in June.

“Fiction at the Friary hosts a free monthly fiction event in Cork on the last Sunday of every month at the Friary Bar North Mall, 3-6pm, everybody welcome. Readings and interviews with guest authors, plus writing prompts, open mic, a raffle of books, plenty of chat and jelly beans. We look forward to beginning work shortly on a radio series with UCC radio.

“My youngest child, Rory, is here with me in London and will be going along to the awards announcement. The title story of my collection had its beginnings in a question he asked me a few years ago when I was putting him to bed: Are there dinosaurs on other planets?”

Rebecca Solnit said: “I was in Bogota doing research on the book after the current one when I got a flurry of all-points-bulletins to contact Michael at the Beineke! It was totally unexpected, since I hadn’t even heard of the prize, and then it was lovely to know that they were giving me the time to do nothing but write and that ‘they’ meant the judges, but also two gay men who wanted to benefit writers.”