In Popova’s thrilling world of mathematics, nature and more, everything is connected 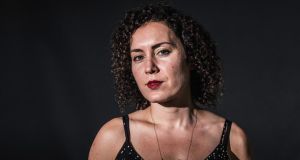 “I have composed a book. It only took twelve years . . . and the most beautiful, difficult, disorienting experience . . . ,” says Maria Popova on her renowned Brainpickings website.

The choice of the verb “composed” is apposite here because this indefinable book often reads like the poetry which means so much to Popova’s heroes while themes and motifs return as in music with renewed beauty and meaning.

Figuring begins with a prelude and unrolls like a poem – chapter zero is a sustained incantation, “All of it-the rings of Saturn . . . my father’s wedding band . . . Einstein’s brain bathing in a jar of formaldehyde, every grain of sand that made the glass . . . all the facts and figments by which we are perpetually figuring and reconfiguring reality-it all banged into being 13.8 billion years ago from a single source, no louder than the opening note of Beethoven’s Fifth Symphony . . . How can we know this and still succumb to the illusion of separateness, of otherness?”

And then thrillingly as in a novel, the second chapter flings us into a seventeenth century carriage with Johannes Kepler as he races “through the icy alabaster expanse of the countryside . . . a letter from his sister has informed him that their widowed mother is on trial for witchcraft – a fact for which he holds himself responsible.”

Kepler wrote the world’s first science fiction story, The Dream in order to advance Copernicus’s heliocentric model of the universe but superstitious minds identified his character’s mother – who conjured up spirits to aid her son’s trip to the moon – as Katharina Kepler.

Although it is impossible to cover the multiplicity of the themes and stories here, love is a central theme, particularly the love of women for other women

Eventually the elderly Katharina is freed from prison, broken in health from the torture and privations she endured. This is a heart-breaking recurrent theme that runs throughout Figuring – the difficulties that women encounter over and over again. They are not believed, accepted or valued, yet they will not be silenced.

They encounter much prejudice and difficulty yet their ground-breaking work in literature, art, feminism, astronomy and mathematics has been instrumental in the development of our world.

Like Popova, these characters love poetry as much as they love mathematics. Popova beautifully closes the artificial gap that has arisen over the years between the two disciplines: “They forgot that science arose from poetry, and did not see that when times change the two can meet again on a higher level as friends,” she quotes Goethe.

She tells how Nikola Tesla’s invention of the self-starting alternating current motor started with “an enchanting sunset in Budapest Park” inspiring him “to recite a Goethe stanza, which suddenly gave him the vision of a rotating magnetic field.”

“Only connect,” EM Forster urged and in Popova’s thrilling world of mathematics, nature, music and poetry, everything is connected, especially the humans, especially the women although the men are not forgotten either, especially Walt Whitman who haunts these pages. And her portrait of the “women’s rights advocate, and abolitionist Thomas Wentworth Higginson – the first to bring Emily Dickinson’s genius to light, and Fuller’s eventual biographer” – is especially fine and fresh.

“He insisted that the dreamer and the worker are naturally symbiotic in each of us.”

These chapters on Dickinson are among the most compelling biographical pages I have ever read, rendering me incapable of closing the book.

The other women in Dickinson’s life, especially Susan Dickinson and Mavis Loomis Todd are described with such compassion and delicacy, I felt I was meeting them for the first time.

Although it is impossible to cover the multiplicity of the themes and stories here, love is a central theme, particularly the love of women for other women. Many of these trailblazers are gay and/or unconventional in their relationships, “Margaret Fuller experienced friendship and romance much as she did male and female – in a nonbinary way.”

And these ideas were to influence her friend Waldo Emerson as he struggled with his own complicated feelings.

It’s harrowing to read about Margaret Fuller’s intense unrequited attachments and Dickinson “who saw herself as ‘Vesuvius at Home,’ ” may have frightened her great love Susan Gilbert into marrying Dickinson’s brother Austin.

Yet this is biography with a difference as Popova insightfully observes that all of us have many selves when she reflects on the difficulties for the biographer.

What is recorded is a fraction of what is thought, felt, acted out, lived. A fraction at best edited by the very act of its selection, at worst warped by rationalisation or fictionalised by a deliberate retelling of reality.

But if sometimes these loves seem too hot to handle, creativity needs love as meat craves salt. Popova asserts that genius is not a disembodied entity but part of a whole being, quoting Dickinson, “Genius . . . is the ignition of affection - not intellect, as is supposed, the exaltation of devotion, and in proportion to our capacity for that, is our experience of genius.”

The final chapters on Rachel Carson were so moving that I cried for thirty-odd pages. Carson wrote Silent Spring on the dangers of pesticides while cancer destroyed her body, her last months on earth spent promoting her revolutionary book despite the hostile interests of the chemical companies which described her as “hysterical” and “a spinster”.

Carson writes to her long-time love Dorothy Freeman about the nourishment creative writers need, “it is quite necessary for me to know that there is someone who is deeply devoted to me as a person”.

Carson’s great capacity for love must owe something to her mother who sold the family china and ate off of plastic plates for the sake of Carson’s education. When Popova quoted Carson on great books, “something that would raise you a little higher than you were yesterday, something that would make you willing and able for your part in the work of the world”, I knew that I had one such book in my hands.

Martina Evans is a poet and novelist. Her latest collection, Now We Can Talk Openly About Men is published by Carcanet.