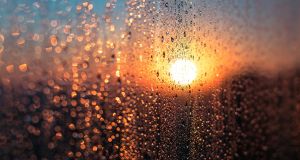 There is an afternoon where all the afternoons

So that no reports or dividends are issued

Quarterly or annually or ever.

If as it were you had that kind of money,

What would such a sum secure? But even though

It’s you who ask, one really couldn’t say.

It would depend on all things being equal,

On the bourse from which no traveller returns,

And on the sentiment prevailing on the day.

Of merely sentimental value, and of that

Only you are competent to judge.

You see the difficulty, then? And yet

One does not care to speculate.

The smell of rain before it falls, perhaps,

Or burning leaves when there is fire

But no smoke, a kind of poetry, you might say,

Arriving neither late nor soon,

Of interest in an abstract kind of way,

Since nothing comes of it. But now

As you must also be aware, the clock’s

Against us. Let us say good afternoon.

Sean O’Brien’s 10th book of poems, It Says Here (Picador), was recently published. His Collected Poems (Picador) was published in 2012. He is professor of creative writing at Newcastle University and a fellow of the Royal Society of Literature