Cultural phenomenon and ‘national treasure’ immortalised by the Orts 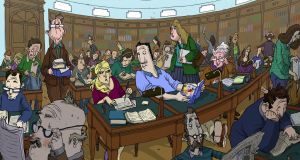 An illustration by Alan Clarke showing Ross in the National Library Reading Room, which was specially commissioned by the library. Illustration: Alan Clarke

Roysh Ross O’Carroll-Kelly, this is it. Like, you have arrived. Un-focking-believable. You and Alan Clarke, illustrator of your personal chronicles, are, like, literally, in the National Library. You’re in a national cultural institution, storting from now, roysh?

They cover Ross’s life in Foxrock and south Dublin environs, from Leinster Schools Senior Cup winner to, like, business owner and family man during and after the Celtic Tiger years, the epic tale enjoyed in Howard’s weekly Irish Times columns, award-winning and highly popular books  and plays.

The cast of characters lampooned in ROCK’s alternate world include his wife Sorcha and their now 14-year-old daughter Honor, his northside son Ronan, his old dear Fionnuala, old man Charles, the shifty solicitor Hennessy and many more frights.

As well as the archive, NLI commissioned two new illustrations of ROCK at the library, including one in the gaff’s domed Victorian reading room. Ross O’Carroll Kelly, who knew you were part of The Orts?

Artist Alan Clarke was, like, “Ross has grown up alongside an entire generation of Irish people, and has navigated the ups and downs of recent Irish history with a diverse and loyal audience of fans.”

It felt fitting, he said, that the contemporary Irish cultural phenomenon, “something of a national treasure”, would be “immortalised in the collections of the library”.

NLI plans to catalogue the archive, then share it with the public, initially on social media over the coming weeks.

The Minister said that, despite the pandemic and lockdown, she was heartened to see NLI continue to “record and tell the story of Ireland”, as well as supporting working artists, including through commissions “like the wonderful detailed and amusing illustrations by Alan”.

Ms Collins says “images of Ross and his world showcase the collaborative creative process which has brought joy to so many, and which the National Library is proud to preserve and share with everyone”.

Covid-19 has affected the income and livelihoods of many artists, writers and creative people, and the library plays a role in supporting the cultural life of the nation, she said.