Workers of the word united in one volume

Jenny Farrell introduces From the Plough to the Stars: An Anthology of Working People’s Prose from Contemporary Ireland 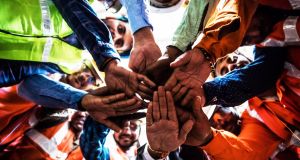 “The cooks, the cleaners, the porters: Unsung heroes on the frontline” cried an Irish Times headline in early May. Suddenly this recognition that whatever else fails, a society cannot function without the working class. For just a brief moment, the insight that these heroes were also the most disadvantaged class in our society.

During the first six months of the pandemic, Culture Matters initiated an anthology of working people’s writing, the newly published From the Plough to the Stars: An Anthology of Working People’s Prose from Contemporary Ireland. In 50 contributions of short fiction and life writing, authors give voice to the working people’s experience in contemporary Ireland. The contributors hail from the whole island of Ireland, driving home the fact that their lives are the same, no matter which side of the Border they live, rural or urban, female or male, younger or older, writing in Irish or English.

Writing in Irish, two women authors, Máire Dinny Wren (Cosmhuintir/ The Common People) and Celia de Fréine (Caoi leis an Ord Tábhachta a chaitheamh i dTraipisí?/ A Way in Which to Overturn the Pecking Order?), employ pared-down parables, connecting past storytelling tone with the present.

Celia de Fréine’s reference to the pandemic in terms of a brief breaking-up of class rule, of the true importance of the working people becoming outstandingly obvious, is linked to other tales of pandemic experience. Ross Walsh’s King of the Concrete Jungle follows the deadly virus into a post-human world. The eeriness of lockdown has suggested to others the realities of an ecological catastrophe, as highlighted in Stephen James Douglas’s Gaia’s Diagnosis.

In some accounts, resilience in adversity emerges, for example in Rachael Hegarty’s The Dodgy Box, or the hope to reunite family through football in Gráinne Daly’s The Dublin-Meath Saga. Seamus Scanlon brings dark humour to resistance in his flash fiction thriller On the House. Liz Gillis (The Liberties: We Don’t Eat Our Young Here Anymore) on the other hand, emphasises the strength gained from growing up in working-class estates.

Some writers project a harsh reality into a dystopia, as Frank Murphy’s Welcome to Dystopia, or Camillus John’s The Rise and Fall of Cinderella’s Left Testicle. There is also a retrospective dystopia shown as one possible outcome of the secomnd World War had Germany won, in David Murphy’s Token House.

From a dystopian future to a dystopian past, emigration and homelessness are themes that appear in Mícheál Ó hAodha’s Imithe/ Gone, and Victoria McNulty (White Horses) writes eloquently about the effects of emigration on the lives of those born into it. Emigration and holding on to identity are also the themes of Eoin Ó Murchú’s memoir. The geographic spread of the authors in itself comments on emigration with some writing from the US, Australia, Scotland and Spain, all with Ireland at the heart of the story.

Set during the Troubles in the North, Brian Campfield’s story shows how working-class unity was achieved for a moment in honour of the legendary Peadar O’Donnell. British military violence, occurring at the same time in Belfast, features in Seán Maguire’s Window Pain, a chilling story based on personal experience; and the long-term effect of sectarian thinking is depicted in John D Kelly’s Meandering. Andy Snoddy (The Radical Protestant Tradition) emphasises the importance of Irish for Protestants on this island, as well as highlighting the significance of the Protestant tradition in the fight for Irish independence.

Prejudice of different kinds are explored, be it middle-class aloofness by Jennifer Horgan (Their Daughter’s Bib), and Michael Casey (Fadings), or chauvinism towards Travellers in Alan O’Brien’s Culture.

Anne Waters (St Stephen’s Day) evokes the unhealed trauma of the Magdalen Laundries, which continues to hold this nation in its relentless grip. In Evelyn, Jim Ward writes in the voice of a Polish waitress in an homage to Joyce’s Eveline. Solidarity with eastern European workers, to the point of adopting their voice, in this case male, also features in Alan Weadick’s Transcendence.

Linda Ervine’s memoir shows how she broke free from humiliation and violence and achieved self-determination. Moya Roddy shows the growing strength of the “weak” in They also serve who only… . Solidarity and fightback are the main themes in Seosamh Ó Cuaig’s memoir Stailc Suiminte 1970/ The 1970 Cement Strike, texts recalling the struggle against the water rates, or James O’Brien’s story (Rebel Meg) of more surreptitious resistance.

This is the first literary project of its kind and scope to be supported by the Irish trade union movement. Gerry Murphy, president of the ICTU, writes in his foreword: “It is also apt, in the midst of the Covid-19 pandemic, that the true value and critical importance of workers’ contributions to our communities, worldwide, takes centre stage. These contributions expose the parasitical captains of industry and their fellow travellers in global finance.”

The writers create a complex image of Irish working people today, one that challenges conventional stereotypes of their class. It is a group that will ultimately rise above the inferior station assigned to them by society, and who will seek to create a just society for all, who will take seriously the current catchphrase “we’re all in this together”. In the words of James Connolly describing the Starry Plough banner: A free Ireland will control its own destiny, from the plough to the stars.

Jenny Farrell is editor of From the Plough to the Stars. An Anthology of Working People’s Prose from Contemporary Ireland (Culture Matters, € 12/ £11). It will be launched online on Monday, November 16th, at 7 pm. The main speakers will be Clare Daly MEP and ICTU president Gerry Murphy, followed by readings from the anthology. It is the second volume of a greater project, the first of which was published a year ago (The Children of the Nation. An Anthology of Working People’s Poetry from Contemporary Ireland, Culture Matters, 2019). It is available from the Culture Matters website, Connolly Books Dublin, An Ceathrú Póilí Belfast, Charlie Byrne’s and Kenny’s bookshop Galway.