‘A literary masterpiece that will be read in 100 years, if the planet survives that long’ 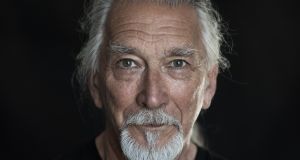 M John Harrison described his work as “a story of lovers so self-involved, they not only fail to make a relationship but also fail to notice a mysterious political takeover going on around them”.

Harrison was announced as the winner of the £10,000 prize rewarding mould-breaking fiction at an online ceremony this evening.

Chair of judges Frances Wilson said: “M. John Harrison has produced a literary masterpiece that will continue to be read in 100 years time, if the planet survives that long.”

Tom Gatti, deputy editor of the New Statesman, the prize’s sponsor, said: “In celebrating the work of border-crossing writers such as M John Harrison, the Goldsmiths continues to play a vital role in reinvigorating the novel form.”

Judge Will Eaves said: “The Sunken Land Begins to Rise Again is a brilliant realist fantasy about love in middle-age and the dissolution of the postwar settlement. In a series of startling knights’ moves across our inner and outer landscapes, M John Harrison quietly overturns all grounds for supposing we know who we are and where we have come from.”

Harrison described his work as “a story of lovers so self-involved, they not only fail to make a relationship but also fail to notice a mysterious political takeover going on around them. It’s a novel about conspiracy theory in which you can’t tell what’s theory and what’s real. It’s set in the UK now and it refers to the UK now. It isn’t science-fiction or folk horror or psycho-geography, but it contains parodic elements of all three, and more.”

Jon Self’s review in The Irish Times said: “Without any formal or structural novelty, [Harrison] has somehow produced the strangest novel on the shortlist ... A book that wriggles like a fish, impossible to pin down, it feels like the most modern novel on this year’s shortlist, from the oldest author of the lot.”

Harrison, best known as a writer of modern fantasy and science fiction, has been described as someone to whom “the question of genre is an irrelevance” and a “genre contrarian”.

He has won the Boardman Tasker Award for Climbers, the James Tiptree Jr Award for Light and the Arthur C Clarke Award for Nova Swing.

This year’s other shortlisted works were: Mr Beethoven by Paul Griffiths; A Lover’s Discourse by Xiaolu Guo; Meanwhile in Dopamine City by DBC Pierre; The Mermaid of Black Conch by Monique Roffey; and Bina by Anakana Schofield.

The prize was launched in 2013 to reward fiction that breaks the mould and extends the possibilities of the novel form. Eimear McBride was the first winner for A Girl Is A Half-formed Thing, followed by Ali Smith for How to Be Both, Kevin Barry for Beatlebone, Mike McCormack for Solar Bones, Nicola Barker with H(A)PPY, Robin Robertson for The Long Take, and Lucy Ellmann last year for Ducks, Newburyport.