A small grey car: the day I refused a lift from Fred and Rosemary West 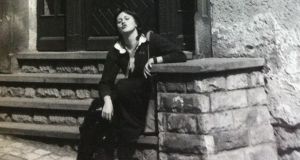 Sally Morgan in her hitchhiking days: I began to think about young women and their vulnerabilities. Images from nature documentaries came to mind.

While hitchhiking at a traffic roundabout outside Gloucester in 1973, a small grey car pulled up and a nondescript pregnant woman and a curly-haired man offered me a lift, which I refused. They drove away without me, but I never forgot the encounter.

I used to talk about it to my friends as my most unnerving hitching moment, and we would try to work out why it had unsettled me more than the lorry drivers who tried to grope me, or the guy who carried a gun in the boot, or the salesman who was out of his head on speed.

There were so many hitching stories and the small grey car was only one of them. My mates and I exchanged our experiences over a half-pint made to last for hours in our local, or around campfires in muddy fields when I worked as an itinerant archaeological digger. We all had tales to tell, because everyone hitched. We were poor and it was our normal mode of travel. Hitching was freedom.

As an art student in the seventies, and a digger in the eighties, thumbing a ride was my equivalent of hopping a freight train like some American hobo in a movie about the Great Depression. It was unpredictable and risky, but you could get anywhere you wanted without a penny in your pocket. If you were lucky you might even get a lift with a truckie who’d buy you a bacon sandwich at a transport cafe and fix you up with your next ride to get you closer to your destination.

Most of those drivers picked us up just to break the tedium. Others had different agendas: some offered you money for sex, and were decent enough to be embarrassed when you said no. Some got tricky. Some you had to run from. Hitching was a world of narrow escapes and unexpected generosities. And it was kind of addictive.

Time moved on. My life settled down. I got a proper job and a proper home, and I stopped thumbing rides and paid for tickets on trains instead. I told the hitching stories less. I filed them at the back of my head, along with the little grey car. It wasn’t until sometime in the 2010s that I saw a documentary, or maybe a website, about the Wests and saw a photo of Rose as her younger self. The shock of recognition was visceral. I’d never linked my scary hitching experience together with these people until this moment.

For years I’d seen the Wests the way they were when they were arrested in the 1990s. Stolid and middle aged. Different to the way they looked those 20 years before, when I’d stood on that roundabout outside Gloucester peering through a car window at a plain young woman who I didn’t trust. Now here were these pictures of their younger selves. And I recognised them. More to the point, I recognised their car – the one I wouldn’t get into.

The realisation of how close I’d come to an unconceivably gruesome end was, and still is, electrifying. I can barely think about it without a wave of nausea breaking through me. It started a train of thought that ended up with my novel Toto Among the Murderers.

I began to think about young women and their vulnerabilities. Images from nature documentaries came to mind. My innocence as I explored the world as a 21-year-old was like the innocence of fawns, or baby monkeys playing in idyllic landscapes while a leopard stalks them. All the leopard is thinking about is the hunt. It doesn’t even need to be hungry. It enjoys the kill.

The American serial killer, Edmund Kemper, who was preying upon female hitchhikers in the same period as the Wests did in England, exulted in the hunt, and is recorded as having gazed on the body of a victim as she lay stashed in the boot of his car, “admiring his catch like a fisherman”.

As a girl becomes a woman, she begins to understand that the world is full of hunters, just waiting for their moment. She learns to deal with it and to survive – learns that sometimes you run and sometimes you stand your ground, but you will never be really safe as you make your way through the beautiful light that comes through the trees in the deep woods.

This vulnerability is also experienced by other groups disenfranchised by their race, class, age, gender identity, perceived disability. The #MeToo movement, BLM and similar campaigns tell us that nothing has changed since I negotiated my survival in the seventies. Hunters are still hunting. That was why it became important to write Toto Among the Murderers.

At the heart of its narrative is the stark truth that the weaker among us are systematically preyed upon. The task of evading violation requires wit, luck and cunning, whether you’re a child, a young woman, a working-class youth, a black, gay or transgender person, or indeed anyone else at the bottom of a power-chain.

The novel is about abuse of the vulnerable, and their strategies for survival. The question that drove me as I went about writing this book was: How do we navigate our way between the good people, of whom there are many, and the cruel ones, who are far more numerous than we ever imagined? I constructed a protagonist who survives by taking on the attributes of an urban fox: following a girl’s journey as she grows from a drownable puppy into a wary fox.

The memory of my encounter with the Wests was the catalyst for an examination of the widespread and insidious cruelty that is a daily battle right across our culture, and it is also a celebration of resistance in all its overt and covert forms.
Toto Among the Murderers is published by John Murray, at £12.99