David Keenan: ‘I’ve been quite close to madness writing these books’

The author on his new novel, setting rules and why he is saying yes to everything 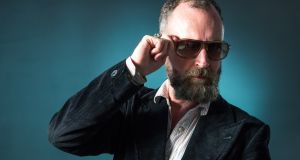 You can usually take book blurbs with a pinch of diplomacy but Edna O’Brien’s verdict on David Keenan’s third novel, Xstabeth, is rather perfect. “I sometimes think [he] dreams aloud,” she says. “His prose has the effortless, enigmatic, unsettling quality of a dream.”

In fact, all Keenan’s novels have an intensity about them that feels closer to performance than writing, a trance-like, feverish quality, as though they were exorcised in one sitting. Xstabeth is a strange, quasi-erotic, devoutly European work that has more in common with Kafka or the French existentialists than Anglo or American fiction. At 176 pages, it feels less like a drafted manuscript than a monologue dictated at a seance.

On a Zoom call in late October I ask Keenan, a former musician, label owner, contributor to the Wire magazine and documenter of England’s avant-garde musical tributaries, if his books are indeed composed that way, or if it’s all a conjurer’s trick?

“I wouldn’t describe it as a trick,” he responds in a thick, rapid-fire Airdrie accent. “I don’t understand the mechanics myself but when you say performance, yeah, totally, because I think my first experience of telling a tale well and enjoying its telling, came from my father’s family.

“My father grew up in the Ardoyne in Belfast. The family all lived through the Troubles, except my Dad, who moved over to Glasgow. He couldn’t read or write, most of the family couldn’t, but they had an incredible faith in the power of language to redeem things that they’d been through and they all had very tough lives. They would come over to stay with us; we had a little annex, a little loft and I would always like to get locked in with them.”

Ancestral voices animated Keenan’s last novel, For the Good Times, an occult imagining of 1970s Belfast. This was a world populated by dapper, violent men who drank and smoked and gambled but were also loving fathers, the kinds of men who would be grievously offended by scruffy or foul-mouthed entertainers.

“These guys, they dressed like [Perry] Como,” Keenan recalls, “they had these amazing shirts and nice handmade suits even though they were poor and they had rings on every finger. And they would tell these stories in a way where it was hard to know what was true and what was myth-making. If you could perform the story perfectly, there would be some kind of epiphany, some kind of gnosis at the end of it. The story would probably involve boasting, completely making stuff up, some abusive slagging off, an interlude for a bit of singing, a couple of really banging Irish jokes, and then back into the tale again.

“When I began getting into modernist literature, exciting literary fiction, it really reminded me of the way that my Dad and his brothers talked. I’ve always liked that place where street vernacular, slang, meets modernism. It’s almost like a working-class Kabbalah, using this amazing power to break through to some moment of epiphany.”

For Keenan, logic is secondary to logos. He uses language as an instrument of spell-casting, of grammar as grimoire, distrusting the literary algorithms of plot mechanics, objective realism.

“Who f***ing cares about stories?” he says. “It’s the old Frank Carson line: ‘It’s the way I tell ’em.’ I’m not really that interested in content. I am interested in the energy, velocity, inspiration and dexterity with which you can tell a tale, the alchemy of language. I think stories are overrated.”

Rhythm, he maintains, is integral. The new novel, even more than his debut, This Is Memorial Device (an imaginary post-punk oral history set in the 1980s Scottish hinterlands), is as close to a song as any prose work I’ve read. And Keenan is gloriously, unfashionably mystical in his approach.

“But now, when it comes to Xstabeth, it’s getting even more extreme because I do feel that book somehow used me to manifest itself. I began to realise that, in a way, my first two books were a sort of payment of gratitude to the universe. But now I feel like I’m writing books that have no point.”

What does he mean, “no point”?

“I think if you have a point to a book, that’s a book that can be solved. It can be read once only. I wanted to write books that were unfathomable, that you could literally never get to the bottom of. I think the reason that William Blake is so alive now, as objectively alive as he has ever been, is his books have no point to them. They’re like organisms almost.

“Thisidea of magical books became very important to me. A lot of people have said they’ve had uncanny experiences reading Xstabeth, it gets under their skin. Well, I feel that too. The book was literally spoken to me.

“I always had that feeling with William Burroughs’s books [too], especially the later ones like Cities of the Red Night, that they were entities. Going back to faith in language, I began to think of how the golem was traditionally made from the clay of the earth but it was brought alive by the carving of letters into its neck. That’s how you give life to entities. Through language, and with use of rhythm, you can bring things alive.

“Realist fiction doesn’t seem that real to me. That’s not really how I experience anything in a dull, objective telling, nobody experiences things like that, you’re absolutely in the middle of the fire with any type of experience.”

Hearing the author speak in rolling, incantational sentences straight out of his books one wonders if, for him, fiction can become a form of monomania or even glossolalia.

“Sometimes it can feel like possession. I mean, I’ve been quite close to madness over the past 15 years with writing these books. The classic definition of madness is voices in your head and I have voices in my head all the f***ing time. I’m amazed that more people don’t talk about this. Is this not a common experience? Channelling voices?

“More and more I think it’s quite a tenuous identification to say that I wrote these books. And, unlike a magician who can do banishment with a pentagram or something to get rid of these voices after he’s done his magical working, there are none of the same rituals available to writers, so you can feel mad, so I’ve had to develop rules.”

What kinds of rules?

“I don’t do research and I never take notes. I only write when I’m sitting down to write. Outside of that if an idea comes to mind, if I even think about the book, I immediately banish that thought from my head. There needs to be a way of controlling these voices, so I’ve developed techniques of listening for them to come, of weighing them, to know if they are the right voice.”

All told, Keenan’s project seems to be a search for the golden thread that joins the Gnostics, the Kabbalists, the symbolists and the modernists. But not, he insists, the postmodernists.

“All my modernism comes from the last sentence of Ulysses,” he says. “Modernism is talked about more and more as a sort of disassembly line of taking apart language, a critique of the language of consensus reality. But those last words in Ulysses – ‘yes I said yes I will Yes’ – what a f***ing ending. After all these experiments, it’s saying yes to what is. That became a big project for me. I wanted to re-enchant the world.

“I’m not interested in ‘mere’ critique. And I really mean that, I think critique is ‘mere’. Saying no is really f***ing easy. Saying yes to everything, saying yes to suffering, saying yes to death, saying yes to losing your friends, saying yes to love, saying yes to beauty –  one yes involves all of it and it’s the greatest affirmation you can possibly do. I took that from modernism. And that’s what I’m doing in my own work, it’s a celebratory reassembling of language and a great universal yes.

“I think Rimbaud was the most successful poet of all time,” he says, “because he cured himself of language and poetry, he walked through the other side, into life, when he was still a kid. I think that is amazing.

“That would be absolutely my dream and my goal: to one day be able to stop writing and disappear.”

Xstabeth is published by White Rabbit