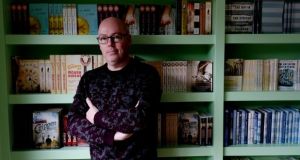 The author John Boyne has set up a short-story competition for children to enter now Ireland’s schools have been closed by the threat of coronavirus. Photograph: Alan Betson/The Irish Times

The author John Boyne has set up a short-story competition for children to enter now Ireland’s schools have been closed by the threat of coronavirus.

“I was thinking about the fact that so many kids are off school at the moment; they’re isolated and at home, and they’re trying to think of something to do. There’s a lot of creativity going on with Irish children in schools. So I’m setting up a short-story competition in three categories: six- to 10-, 11- to 14-, and 15- to 18-year-olds,” he told Liveline, on RTÉ Radio 1, today.

“We’re asking children to write a 300-word short story. Three hundred words is very difficult: it’s so short you’ve really got to think about every single word that goes into it.

“We’re going to have in each category an overall winner, who will get a €200 book token, five winners of €100 and 10 winners of €50. We’ll keep it open for a week – spend some time on it. Hopefully it will get children being creative.”

Boyne said he came up with the idea after listening to Leo Varadkar address the national on television last night. “I was thinking, everybody’s trying to do something, everybody is thinking what they can do to help in some way.”

And he had some tips for anyone interested in entering. “Possibly the most famous short story of all time is six words, by Ernest Hemingway: ‘Baby shoes for sale, never worn.’ You can actually get a lot into a short amount.

“A lot of the time with a short story, you don’t need a beginning or an end, just kind of a middle. You know you come in when the action has started; you leave the reader wanting more; and it will be about the sentences you create within those 300 words, the characters, the ideas.

“Hopefully we’re going to get a lot of entries. The six of us are looking for the ones that will just jump out at us as being inventive, imaginative, sad, funny, scary, whatever. Just something that jumps off the page. Anything up to 300 words – but it cannot be 301.”

The closing date is Wednesday, March 25th, 2020, at 5pm. Full details of how to enter appear on John Boyne’s website.