Sean Duffy series: ‘crime writing at its most visceral and cathartic’ 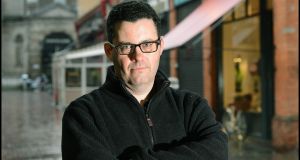 Adrian McKinty: “one of my favourite writers on the planet,” says Ian Rankin. Photograph: Brenda Fitzsimons

Ian Rankin
My wife grew up in Belfast and was in Northern Ireland throughout The Troubles. I first visited her there in the early 1980s, when it was still pretty hairy.

This was before I became a crime writer. When that happened, I realised the crime novel could take on challenging socio-political landscapes and allow the audience to explore them alongside the author.

I also love crime novels with a sense of place and with strong maverick central characters, heroes who are conflicted and complex, with a streak of anarchy running through them.

So, aye, that’s why Adrian McKinty is one of my favourite writers on the planet.
Ian Rankin is the bestselling author of the Rebus series

Diana Gabaldon
Rain Dogs is the fifth book in the Sean Duffy series about a young Belfast police inspector trying to solve “ordinary crimes” during The Troubles. This one features a murder mystery inside a castle that takes Duffy to England, Finland and back to Belfast again for the conclusion.

A young English reporter is found dead at the bottom of a tower in a 12th-century castle that was securely locked up for the night. Either she killed herself or was killed by the castle’s elderly caretaker who doesn’t look like a suspect to anyone. When it turns out, of course, that it was indeed a homicide Inspector Duffy realises that he’s dealing with a classic locked room mystery. This makes no sense at all to him as he’d already had one of those in his career. What are the odds of this happening to the same simple detective twice? It’s clearly impossible so what on earth is going on?

Adrian McKinty’s Sean Duffy series (In The Morning I’ll Be Gone, Rain Dogs, Police at the Station and They Don’t Look Friendly, etc.) is an addictive combination: police procedural, political thriller and historical fiction– they are all set during the Troubles in1980s Northern Ireland, and feature Duffy himself, a fascinating character and the only Catholic policeman in his unit – not a comfortable position to be in. This is a series that is creatively violent with flashes of a beautiful sorrow and which is constantly and compulsively funny.
Diana Gabaldon is the author of the bestselling Outlander series

Brian McGilloway
I’ve long maintained that, in the absence of a truth commission in the North, fiction is the closest we will come to reconciling ourselves with our recent history, and that crime fiction is the vehicle most clearly suited to dong so.

Adrian McKinty spearheaded an explosion of crime writing from Northern Ireland that appeared in the wake of the violence here. His novel, Dead I Well May Be, was the first crime novel I read by a Northern Irish writer and it acted as both an artistic catalyst and a plumbline for my own crime writing.

While many of us have chosen to look at the aftermath of the violence in the North in our work, McKinty, by throwing his character of Sean Duffy into the heart of our violent history, has grasped with both hands that role of truth commissioner, dismantling the events of the past and imposing some form of rough justice on those who hitherto escaped it in any form.

The Duffy novels are examples of crime writing at its most visceral and cathartic with Rain Dogs the crowning achievement of the series.
Brian McGilloway is the bestselling author of the Lucy Black series