'Like the Kardashians of today, Oscar Wilde absolutely milked it' 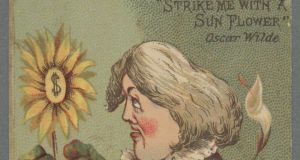 The most colourful pieces on display are a series of trade cards dating from the famous US lecture tour.

The meteoric rise and catastrophic fall of Oscar Wilde is such a familiar story that we’re inclined to take it for granted.  But a new exhibition in the Long Room at Trinity College, Dublin, gives it a vivid refresh by getting up close – and very personal – with the details of Wilde’s remarkable life.

One of the most poignant exhibits is a letter by Wilde to his five-year-old son Cyril in 1891.  The only known surviving letter to either of his children, it begins: “My dearest Cyril, I send you a letter to tell you I am much better. I go every day and drive in a beautiful forest called the Bois de Boulogne – and in the evening I dine with my friend, and sit out afterwards at little tables and see the carriages drive by. . .”  After promising to “bring you and Vivian back some chocolates” the letter is signed “Your loving Papa, Oscar Wilde”.

The curator of From Decadence to Despair, Caoimhe Ní Ghormáin, has organised the exhibition as a four-chapter recreation of Wilde’s story.  It begins with his time as a student at Trinity and moves through marriage and family to his period of international celebrity and, finally, his years of exile.

The only Oscar Wilde archive to be held in a public institution in Ireland, Trinity’s Wilde Collection was acquired in 2011 from the rare-book dealer and lifelong collector of Wildeana, Julia Rosenthal, and it is not, Ní Ghormáin explains, the usual library collection of literary papers and editions of the author’s works.

“There’s nothing literary about the Wilde Collection,” she says. “Julia Rosenthal loved Oscar Wilde and bought things about him from when she was quite young. It’s a real collector’s collection which focuses on memorabilia such as photographs and letters.”

Among the most striking – and certainly the most colourful – pieces on display, are a series of trade cards dating from the time of the famous US lecture tour which saw Wilde arrive in New York as a young poet in January 1882 and leave, 12 months later, as a superstar.

“More than any other person at the time he was a master of self-promotion and – like the Kardashians of today – absolutely milked it,” says Ní Ghormáin. “His face was used to advertise everything from face cream to stoves and cigars.”

The vividly-coloured cards, each about the size of a mobile phone, range from a caricature which declares “Strike Me With A Sunflower” to one which features a cherubic-looking head of Wilde – he appears to be wearing lipstick – and a lady who has obviously made copious use of Madame Fontaine’s Bosom Beautifier.

“It tells you all about it on the back,” says Ní Ghormáin, turning the card around to read about the perfumed cream which, it claims,  “not only increases the size and hardens the bosoms, but gives to them that beautiful transparency so much admired. . .”

Why the manufacturers of this particular product decided it would gain from an association with Wilde is anybody’s guess – though when you come to think of it, it’s no sillier than having Brad Pitt endorse Chanel No 5.

So spectacular is the Long Room of the Old Library that it makes a fantastic and immensely atmospheric backdrop to the exhibition.

Wilde, who studied classics at Trinity and was a successful and highly accomplished scholar, would surely approve.  On the down side, however, the restricted display space – there are just a couple of glass cases in the centre of the room – made it difficult for Ní Ghormáin to choose which pieces from the large collection to feature.

Wilde’s classics textbook, complete with his own notes in the margins, was a no-brainer – as was a cartoon from the Philosophical Society’s “suggestions book”, and the iconic photographs of Wilde taken by Napoleon Sarony in the US in 1882.  But when it came to the theatre programmes from his four social comedies – the absolute pinnacle of his career as a writer – she had to choose just one, and so The Importance of Being Earnest is included.

Another key item is the sales catalogue from the auction of Wilde’s Chelsea house at that time. “There are only four copies of it in existence, and the one that we have is in the best condition,” she says. “At the time of his trial Oscar’s creditors demanded that the contexts of his house be sold to pay his legal fees.”  The Tite Street catalogue lists the contents of the house: china, porcelain, Persian rugs, inscribed editions of works by his father William and mother Jane, even his children’s toys and their rabbit hutch.

The star of Oscar Wilde: Decadence and Despair, however, is likely to be a tiny, elaborately engraved silver card case. “Everybody wants to see this – it’s very special,” says Ní Ghormáin. “It was given to Oscar on the day he left Reading Gaol, in 1897, by Ada Leverson and is engraved ‘To Sebastian Melmoth from Sphinx’.” Sebastian Melmoth was the name Wilde adopted when he came out of jail; Sphinx was what he had always called Leverson, who gave a generous amount of money to help him get back on his feet.

Sadly, Wilde became more and more depressed, drank too much, moved from one grotty hotel to another. It was a long way from the bucolic image of Paris he had presented to little Cyril in his 1891 letter. Another letter, written to the novelist Eliza Stannard just after his release from Reading Gaol, expresses Wilde’s emotions with characteristic intensity.  It is, says Ní Ghormáin, her favourite piece in the show. “His hand was starting to fail, so it’s quite faint and difficult to read,” she says. “But that’s probably why it’s so moving; the end of his life was just so sad.”

“Dear Mrs Stannard,” the letter reads, “Of course I have passed through a very terrible punishment and have suffered to the very pitch of anguish and despair. Still I am conscious that I was leading a life quite unworthy of an artist in every way, and unworthy of a son of my dear mother whose nobility of soul and intellect you always appreciated, and who was herself always one of your warmest and most enthusiastic admirers. I am living quietly in a little auberge by the sea, and for the moment am quite alone. . . Pray let my name and place of sojourn be quite a secret to all. I hope to live in solitude and peace.”

“Oscar Wilde: From Decadence to Despair” is at the Long Room, Trinity College, Dublin, Mondays to Saturdays, 9.30am to 5pm, Sundays noon to 4.30pm, admission €10-€13, includes entrance to Book of Kells

‘I feel ashamed to be Irish’ – David Brophy
4

Head-shaving, rape, murder. Atrocities against women in the ‘Tan War’
5