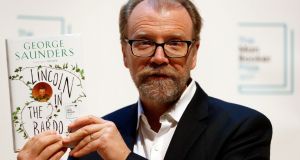 George Saunders, one of the world’s most acclaimed short story writers, has won this year’s Man Booker Prize for his debut novel, Lincoln in the Bardo. He becomes the second US author after Paul Beatty last year to win the £50,000 prize after they became eligible in 2014.

Lola Young, chair of judges, said: “The form and style of this utterly original novel, reveals a witty, intelligent and deeply moving narrative. This tale of the haunting and haunted souls in the afterlife of Abraham Lincoln’s young son paradoxically creates a vivid and lively evocation of the characters that populate this other world. Lincoln in the Bardo is both rooted in, and plays with history, and explores the meaning and experience of empathy.”

The #ManBooker2017 winner George Saunders receives their trophy from HRH The Duchess of Cornwall and cheque from @ManGroup Chief Executive Luke Ellis pic.twitter.com/C6kvRWT9Ds

The novel, which has distinct echoes of Máirtín Ó Cadhain’s Irish-language classic Cré na Cille, tells the story of the death from typhoid of Abraham Lincoln’s 11-year-old son Willie and the grief-stricken US president’s visits to his crypt in a Georgetown cemetery. Willie is surrounded by other dead spirits who talk directly to the reader, and the book is written entirely in dialogue intercut with extracts from historical accounts (many real but some invented).

John Self, reviewing Lincoln in the Bardo for The Irish Times, had mixed feelings: “His blend of satire, sentiment and linguistic sensibility has made him one of the most acclaimed short-fiction writers in English... Yet his strong style means a little of his work goes a long way... Lincoln in the Bardo’s looseness means it is easy to read, but it feels attenuated, at 350 pages less weighty than the best of his stories. Leave it to George Saunders always to surprise us, showing us here that a book can be at the same time a delight and something of a disappointment.”

Saunders was born in Texas in 1958, but grew up in Chicago. His first collection, CivilWarLand in Bad Decline, was published in 1996. He is the author of nine books, including Tenth of December, which was a finalist for the National Book Award and won the inaugural Folio Prize (for the best work of fiction in English). He teaches creative writing at Syracuse University in New York.

Two Irish authors were longlisted for this year’s prize, Mike McCormack for Solar Bones and Sebastian Barry for Days Without End.