Philip Pullman: ‘I don’t think anyone could have predicted the ruin’

The author on His Dark Materials, its follow-up trilogy, and the ‘total failure’ that is Brexit 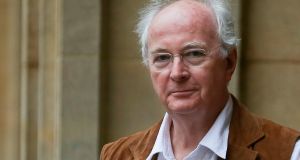 British author Philip Pullman: ‘I don’t think anyone could have predicted the ruin, the decay, the distress, the chaos, this most terrible and appalling mess.’ Daniel Leal-Olivas/AFP/Getty Images

When Philip Pullman began conceiving of the book that would become the first instalment of the His Dark Materials trilogy, he wasn’t thinking of it as fantasy. It is not that he is a literary snob – he is happy, he says, for his work to be placed at the “vulgar end” of the literary spectrum – but he was “not interested in dragons and swords. I was interested in human psychology, and that is absolutely a realistic concern. It just happened that fantasy offered me a wider range of metaphors for exploring the nature of being human than straightforward realism did.”

The universe of His Dark Materials is, of course, fantasy in a very particular way. People have daemons that figure as physical manifestations of their conscience. There are talking animals and armoured bears. The universe we know contains portals that connect to different worlds, which his unforgettable heroine Lyra Belacqua manages to slip through in her quest to discover the true nature of Dust; the origin of sin.

Magical minutiae aside, however, Pullman’s trilogy had clear resonance with the real world. Marketed for a young adult audience, it attracted a far wider readership, who saw in the novels’ battle between secular and spiritual worlds a mirror of contemporary Christianity. Pullman, a public and outspoken atheist, was pilloried by various religious organisations, but the controversy did nothing to harm his bestselling status.

Pullman is speaking with me from Oxford, where he has lived for almost all his adult life and where His Dark Materials is largely set. We are talking to discuss the release of The Secret Commonwealth, the second instalment in the Book of Dust trilogy, which Pullman describes as “an equel” to his best-selling series. La Belle Sauvage, the first part of The Book of Dust, gave us a glimpse of the fearless heroine as an infant, setting in motion the drama that occupies His Dark Materials. The Secret Commonwealth, meanwhile, skips towards the end of Lyra’s teenage years to explore her life as a student in Oxford. When the first images for The Book of Dust began to haunt him, Pullman was as surprised as anyone that Lyra would have life on the page again.

“The first and last words of His Dark Materials are Lyra,” he explains, “and when I typed that final word in The Amber Spyglass, I thought that was it. I thought, ‘I have told that story. It is over and done with.’ I certainly didn’t want to get involved with an endless series. But somehow I found myself returning to world she lived in. There were mysteries I hadn’t explored.

“And I also found myself wondering what would happen to Lyra. She has seen and experienced so much, she is yet so young. What must life be like if the most interesting things have happened to you already? What an anticlimax! And then the first image of La Belle Sauvage came to me. It was something I wanted to do for myself, not for the publishers or readers.”

Readers will certainly be surprised by the turn that The Book of Dust takes with The Secret Commonwealth. Lyra is no longer a child, and her ascendence to adulthood is marked by the emergence of an adult sexuality that will ensure the book is not shelved alongside His Dark Materials. The central conflict of the novel, meanwhile, is also driven by Lyra’s emergent adult self, and her discovery that she cannot tolerate her daemon, Pantalaimon.

I loved the Beat Poets, the sound poetry made in my mouth when I read it aloud, but it turns out I wasn’t very good at it

“I was interested in exploring this idea of what it might be like to discover that you don’t like your daemon and it doesn’t like you,” he explains. “The function of a daemon is to dramatise the psychology of the characters, so I suppose it is a way of dramatising what it is like to reject your very self. It is painful and dangerous and fatal to be separated, to become so estranged. What happens when you don’t like the self that you have become? It is something I think we all have felt at some stage in our life – I know I have – and in some ways it is a classic feeling that you have being a teenager and entering into the adult world.”

Teenagers are something Pullman knows a lot about. He came of age “at the best time ever to be a teenager. The Beatles, Bob Dylan, the Beat Poets – there was all that music and revolution going on.”

Indeed, it was as a teenager that Pullman decided to be writer.

“I thought I would be a poet,” he says. “I loved the Beat Poets, the sound poetry made in my mouth when I read it aloud, but it turns out I wasn’t very good at it.”

What he was good at, however, was telling stories, and, after graduating from Oxford, it was as a teacher of teenagers that he honed his craft as storyteller.

“I was teaching at a time when teachers had a bit more freedom than they do now,” he says, nostalgically. “You could teach what you thought children might find interesting in a way you thought might interest them, and I thought it would be a good idea if my students knew the stories of Roman and Greek mythology. Gods and heroes; all that stuff. So I told them the story of the Iliad, the Trojan War, the Odyssey, and I did this for several years, three classes a year. I got to know those stories very well, but I also got to know how to tell a story well, how to time a story so the most exciting bit comes as the bell goes, so they can’t wait until the next instalment, how to give enough detail to let them imagine the world but not so much detail that they are bored.”

He despairs for the current conditions in classrooms across the United Kingdom.

“The government are leading on this idea that you teach spelling and punctuation and grammar, but what you really need to do is inspire children, and there is no time for that in the national curriculum. Without time, what you have will be sad and meagre and thin.”

I love the process taking a beautiful piece of wood and shaping it, polishing it, until it becomes something else

Pullman’s own experiences of education were not entirely idyllic. Although his encounters with poetry – from Milton to Ginsberg – would prove transformational, by the time he got to Oxford, to read English, he had studied himself into a linear path that didn’t inspire him.

“Really, I was much better suited to studying something practical: engineering, mechanics, woodwork. The writing was always going to happen no matter what I studied, but I would probably have performed a lot better.”

To prove his point, he describes the woodworking studio at his home where he spends every afternoon, after mornings spent writing, making boxes, cabinets, bookshelves.

“I love the process taking a beautiful piece of wood and shaping it, polishing it, until it becomes something else.”

It uses a different part of the brain, he says, but admits that there are parallels in the different processes.

“If writing a book is like growing a tree, editing is like making something with wood you have grown.”

Where does the processes of adaptation figure in this metaphor, I ask him. A highly anticipated TV version of His Dark Materials has just been adapted for the BBC.

“Well, that’s entirely different,” he says. “It’s taking something that already exists and making something new from it.” Pullman is an executive producer on the show but has not had much practical input. “It’s their story now.”

Anyway, he is too busy writing, woodworking and worrying about the state of Britain to be more involved. In typically outspoken fashion, he finishes with a fascinating tirade against what he sees as “the total failure, the implosion of my country. I don’t think anyone could have predicted the ruin, the decay, the distress, the chaos, this most terrible and appalling mess. How the two biggest democracies in the Western World have managed to get leaders of such barbarity is something historians of the future, if there is history in the future, if there is a future, will be puzzling about for a very long time.”

The Secret Commonwealth is published by Penguin. His Dark Materials premieres on BBC One on November 3rd