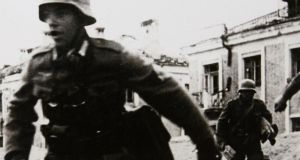 From the cover of Stalingrad by Antony Beevor (Penguin)

Of the many places one would not wish to be in the 20th century, few are more unappealing than the city of Stalingrad and its surroundings between August 1942 and February 1943. The awesome scale of the carnage described in Antony Beevor’s magisterial, justly acclaimed tome of military history suggests that, irrespective of the warring ideological systems for which hundreds of thousands of soldiers and civilians died, and the colossal folly of the whole endeavour, merely being there was enough to constitute heroism.

When Hitler launched his attack on the Soviet Union with Operation Barbarossa, he intended to annihilate Bolshevism – or, more accurately, its sinister mutation, Stalinism. When his armies finally reached Stalingrad on the banks of the Volga, more was at stake than the symbolism carried by the city’s name: among historians it is widely accepted that the ensuing catastrophe for the German forces marked the turning point in the second World War, and thus the high-water mark of the Third Reich.

And what a catastrophe it was. If you’re the kind of reader who is spurred on by phrases such as “savage fighting” and “battle of annihilation” appearing every few pages, Stalingrad will keep you lit. Many know the story of the largest confrontation in the history of warfare, more or less: the staggering numbers of Soviet soldiers executed by their own side for “cowardice” and “treason”; the hell-on-earth intensity of the aerial bombardment and house-by-house street fighting; the final encirclement and devastation of the German Sixth Army, laid low like others before them by the severity of the Russian winter. Beevor’s achievement is in taking these big, head-spinning historical facts and animating them with pace and eye-catching detail, making a read of it all.

After the defeat at Stalingrad, Hitler was a diminished man, as vengeful Soviet armies marched west towards Berlin. Like the armageddon it depicts, Stalingrad also represents a turning point: following its success, military history burst out of its niche to become a bestselling genre.