Motherfoclóir, Brexit and the birth of my daughter 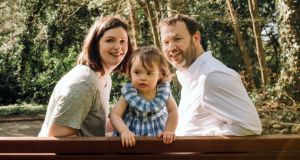 Darach Ó Séaghdha with his wife, Erin, and daughter Lasairíona

On March 31st, 2016, I lay in bed with my wife, my hand on her heavily pregnant belly. We knew there was a little girl in there and we couldn’t wait to meet her. But what kind of person would she be? Clever and beautiful, of course. Brave and kind, hopefully. She’d learn to drive at the earliest opportunity, unlike her parents who left it embarrassingly late. But would she go to university in Dublin like her dad or up in Belfast like her mummy? As with so many 26 county eccentricities, Erin could never really get into saying “Mam”. Would our daughter be into sports or creative, or would she be both? One thing we knew was that she’d be going to the local Gaelscoil – that wasn’t up for debate.

This conversation would come to haunt me in the coming weeks. Shortly after Lasairíona was born she was diagnosed with Down syndrome, a condition we had heard of but knew nothing about. We did not yet know all the things people with Down syndrome had done, do every day and are about to do. All we could hear was bad news and we sat there in the ward, stunned and broken as the mothers in the beds around us welcomed overjoyed family members.

We understood referendums a certain way: you have a first one to vote for how you feel, then a real one to vote for what you think. Our British neighbours never got this memo

In the previous weeks, before I had given chromosomes a second thought, I had been working on a manuscript, having been advised that were would be some interest in a book spinoff of my Twitter project, @theirishfor. But I had now lost all motivation. I had entered so many short story competitions, radio play competitions and novel fairs and had gotten nowhere. I was still the same writer who failed back then, but now there was the added factor of me being furious at the universe and utterly unequipped to handle any more disappointment. However, Erin insisted that I not throw this chance away. The meetings with publishers (at least one of which took place while I had some baby vomit on my shoulder) and the word targets gave me focus at at a darkly muddled time, and helped to push me through it.

Then one sunny afternoon in June, my agent rang me to say that I had an offer on my book – and they weren’t even going to make me change the title, which sounded like a rude word! (Reader, I was as shocked to find that out as you were). After the phone call ended I remember looking at all the people who were walking down the street as if it was just another day, as if the world hadn’t just changed.

That was also the day of the Brexit vote.

We understood European referendums a certain way in the Republic – you have a first one to vote for how you feel, then a real one to vote for what you think – but our British neighbours never got this memo. My lifelong love of watching election results roll in was now coming back to me as an kind of ironic punishment, and as pundits turned up to patiently explain the functions of EU institutions and the practical implications of leaving I screamed at the television, demanding to know where those feckers were two weeks earlier.

One thing was clear: Ireland, and the Border that divided it (the one between Lasairíona and her grandparents’ house), hadn’t crossed the minds of the Brexiteers. Not that we were eager to catch their eye, only that several of their key plans were either physically unworkable because of the Border, would destroy the Good Friday Agreement or would be contrary to how the Northern Irish electorate voted.

Brexit, and the Trump vote that followed, were fuelled in part by a reaction against the courtesies and cautions often grouped together as political correctness: health and safety, considerate and inclusive language, increased respect for and education about differences. What kind of world had I brought a daughter into, where a man could perform a grotesque, mocking imitation of a reporter with a disability and go on to be elected American president? Would she have to pass through an armed checkpoint at Carrickmacross to see her granny because a voter in Essex was worried about Polish plumbers?

I had an epiphany when a disability rights campaigner called Sinéad Burke got in touch with me. She asked me how to get a new entry added to the Irish dictionary; there was no equivalent term to “little person” included at this point (there is now, thanks to her). She didn’t want another Leaving Cert student with achondroplasia to have to walk into her Irish oral and describe herself with a word she didn’t like such as abhac for fear of giving “the wrong answer”. As we chatted more, Sinéad made a remark that really resonated with me – “it’s not achondroplasia that makes me feel disabled, it’s the built environment around me that hasn’t included me”.

This remark crystallised what I’d been trying to express about my daughter’s extra chromosome and it happened in the context of looking for an Irish word.

At creche Lasairíona is surrounded by kids who see her as no different from them. If they learn about ‘normal’ the way we did, they’ll forget the richer truth they know now

What do we talk about when we talk about the Irish language? Do we really prefer one palette of sounds and syllables over another, or are we referring to something more profound? I think that in protecting the heritage of minority languages and in championing the potential of people with disabilities, there is a resistance to an imposed, careless concept of normality – an assumption that things are the way they are because that’s the way they’re supposed to be. It’s something I’ve thought about when I’ve tried to manoeuvre a pram along the narrow footpaths of our village and wondered how a wheelchair user could cope. Without drawing unhelpful equivalencies, we all have points in our lives when our environment reminds us that we are not “normal”, that people are supposed to be a certain way and those who cannot or do not are an inconvenience.

When I collect Lasairíona from creche now after work, I walk into a room where she’s surrounded by kids who know her, include her, play with her, laugh with her and see her as no different from them. If they learn about what normal is supposed to be the way we did, they’ll forget the richer truth they know now. It’s an insult to small children to describe horrible adults as childish.