‘21 Lessons for the 21st Century’: A wake-up call about humanity’s future 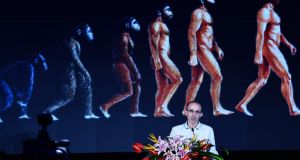 “Confusion”, says the hedge school master Hugh near the end of Brian Friel’s Translations, “is not an ignoble condition”. The Israeli historian Yuval Noah Harari has emerged as a kind of global hedge school master, an illuminating guide to the large questions of human evolution and destiny. Sapiens: A Brief History of Humankind, originally written in Hebrew for an Israeli readership and published in 2011 became a global bestseller in translation in 2015. He followed it up with Homo Deus: A Brief History of Tomorrow, teasing out the implications of the increasingly potent fusion of infotech and biotech for our very understanding of what it is to be human. Having done the past and the future, Harari now turns to the present. But like Hugh, the contemporary sage can offer only the comfort of what he calls “bewilderment”.

This is not as offhand or as self-defeating as it seems. When an obscure intellectual becomes almost overnight a kind of universal guru, the great dread is pomposity. And the great temptation of our gloomy moment is to pile on the angst. So when Harari writes that “the first step is to tone down the prophecies of doom, and switch from panic mode to bewilderment”, he is guarding against both dangers. Bewilderment is not necessarily either a cop-out or an excuse for incoherence. In Harari’s writing, it is a matter of tone, a way of dealing with the paradox that we are engulfed by forces that we cannot fully understand but must try to comprehend.

His latest, 21 Lessons for the 21st Century is not quite the history of the present that it claims to be. It might be more accurate to call it a mash-up of Harari’s view of the long human past with his take on the (perhaps much shorter) human future – in other words of his last two books. It takes the central thesis of Sapiens – that humans are above all a fiction-creating species – and examines it in the light of the central conclusion of Homo Deus – that Homo sapiens itself may become a subspecies to a new technologically-enhanced post-human elite. And it asks therefore whether we are telling ourselves a collective story at all adequate to these immense new possibilities. If, as he says, we are creating a world in which “bioengineering coupled with the rise of AI might therefore result in the separation of humankind into a small class of superhumans and a massive underclass of useless Homo sapiens”, what story can prevent this catastrophe?

This question, crucial as it is, does not really make for a comprehensive analysis of today’s political crises. Harari suggests, for example, that 20th-century politics had just three competing stories – communism, fascism and liberalism – and that each of these in turn has collapsed: “In 1938, humans were offered three global stories to choose from, in 1968 just two, in 1998 a single story seemed to prevail; in 2018 we are down to zero.” This is rather too schematic. “Liberalism” was never one story – the social democratic welfare state is underpinned by a very different narrative to the one that validates neoliberal market-worship. And while fascism may have disappeared as a viable narrative in 1968, it seems overly optimistic to suggest that it is not alive in new forms in 2018.

Equally, Harari’s long view, while almost always convincing in itself, is not necessarily the best way of understanding the specificities of our particular moment in time. Thus he is unarguably right when he tackles “post-truth”:

“In fact, humans have always lived in the age of post-truth. Homo sapiens is a post-truth species, whose power depends on creating and believing fictions. Ever since the Stone Age, self-reinforcing myths have served to unite human collectives.” And he is wittily provocative when he adds of “fake news” that “When a thousand people believe some made-up story for one month – that’s fake news. When a billion people believe it for a thousand years – that’s a religion.” But this doesn’t really help us much in the here and now with the very precise shifts in attitudes to evidence that are undermining democratic processes.

Admittedly, it doesn’t matter very much that Harari in this book is often much more discursive and tangential than in his previous work, for the simple reason that he is always intelligent, engaging, erudite and illuminating. And 21 Lessons is in any case a much more personal book, more situated in Harari’s own life. He discusses being gay in relation to his broader point that as humans we do not always know big things about ourselves – things that machines are going to know about us in the near future.

He is very funny and refreshingly sceptical about his own Jewish identity: “Personally, I am all too familiar with . . . crass egotism, because the Jews, my own people, also think that they are the most important thing in the world.” He wonders whether the surveillance society of the future might be an extension of the contemporary Palestinian experience: “What Palestinians are experiencing today in the West Bank might be just a primitive preview to what billions will eventually experience all over the planet.”

But the heart of the book is really a revisiting of the dark concerns of Homo Deus: the threat of redundancy for the vast majority of our species, confined to irrelevance by a self-governing technology and the elites that merge themselves with it. “The Russian, Chinese and Cuban revolutions,” he writes in one of his most terrifyingly convincing passages, “were made by people who were vital for the economy, but who lacked political power; in 2016, Trump and Brexit were supported by many people who still enjoyed political power, but who feared that they were losing their economic worth. Perhaps in the twenty-first century populist revolts will be staged not against an economic elite that exploits people, but against an economic elite that does not need them any more. This may well be a losing battle. It is much harder to struggle against irrelevance than against exploitation.”

This is scary stuff, and it would be lovely if Harari or anyone else could offer a more comforting antidote to panic than bewilderment, even if, as here, it is expressed with dazzling clarity. But he is right not to offer false reassurance. What he offers instead is a wake-up call – a call, that is, to wake up and expand the one thing we have that smart machines cannot yet match: consciousness. Harari is no mystic but he does remind us that our survival depends on being conscious of what is happening to us and being in every sense mindful of who we are, not just as individuals and nations, but as a species.