When Words Fail review: The effect of music on those living through conflict 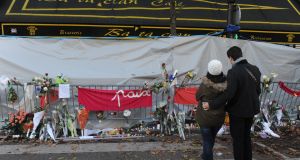 A memorial for the victims of the Bataclan attack in Paris on November 22nd, 2015. Photograph: Pierre Marcellsi/Gamma-Rapho/Getty Images.

Book Title:
When Words Fail: A Life With Music, War and Peace

It’s only words, but words are all I have, sang the Bee Gees. But this isn’t true: We have music too and here, one of the most celebrated journalists of recent times explores why music can speak to us in a way that words cannot.

Anyone who has witnessed deeply affecting events and then struggled to respond sufficiently with words can only envy musicians such the great guitarist Carlos Santana who remarks in the book: “Why is it that you can play one note and it can make people cry?”

Graham Nash (of Crosby, Stills, Nash and Young) asks a similar question as he considers the effect on him of an early Jimi Hendrix concert. “What on earth is going on?” he asked.

The impact of music on human emotion is the central question explored in the book. Many chapters open with a description of a concert or musical event that had a profound impact on the writer, followed then by interviews with the likes of Patti Smith, BB King, John Cale, Bruce Dickinson (Iron Maiden front man), Joan Baez, Christy Moore and others who the writer asks to address Graham Nash’s question.

The author says music has always been his great love, though he has rarely been short of words himself. Vulliamy reported most famously from the Bosnian War, for which he won many journalism awards, and also from the Iraq War of 1991 and 2003, the 9/11 attack and its aftermath and many other places over a journalism career of over three decades.

The effect of music on those living through conflict and war is very powerfully described. At one point the reader may feel as if they have actually been in Leningrad for the first performance there in 1942 of Shostakovich’s 7th symphony. Using contemporary eye-witness and historical sources Vulliamy brings alive this city under siege. We see an orchestra of players, cold and emaciated, some too weak to blow properly into their wind instruments, rehearsing this lengthy, highly complex symphony. Some players die as the rehearsal period goes on. They leave rehearsals from time to time to bring piles of corpses to mass graves and return again to rehearse some more.

And finally, when the symphony is performed, loudspeakers broadcast it from the Philharmonic Hall around the pulverised but defiant city. An artilleryman who heard it from the city’s front line, wrote: “It seemed the cloudless sky had suddenly become a storm bursting with music as the city listened to the symphony of heroes and forgot about the war, but not the meaning of war.”

Or as the old man Viktor Koslov, who played clarinet that night told Vulliamy: “Ah, but the concert itself, it was our answer to the suffering.”

“It was an act of defiance” says Bruce Dickinson of Iron Maiden. But here he is talking about his own concert in Sarajevo, 50 years later. He and his band got there on a flatbed truck, along the highly dangerous route over Mount Igman during the three-year siege of that city.

We are shown the importance of music in Sarajevo during the siege. We encounter the cellist Vedran Smajlovic who defiantly played for 22 consecutive days at the spot where 22 people were killed by a shell; Joan Baez who visited and sang in the National Theatre, on television in Bosnian, and for French soldiers after mass; Iron Maiden on their dangerous journey there; and understand the commitment that drove the Rock Under siege festival. Musicians felt they needed to be there. Cynics would say it was just a trendy thing to do. Cynicism does not come across in this book.

From Shostakovich in Leningrad to Iron Maiden in Sarajevo, Vulliamy conveys the sense that music is a deeply essential part of being human. The hostility of Isis to music, expressed most viciously in their attack on the Bataclan theatre in Paris, is referenced in several places in the book. The concept of music as defiance against dark forces comes through in the description of the concerts in the Bataclan and elsewhere in Paris after the attack.

And indeed the Ariana Grande concert in Manchester rescheduled after the terrorist attack - with Robbie Williams, Coldplay, Liam Gallagher and others - seems to contain some faint echo of the spirit that led emaciated players to play one of the most difficult symphonies in a city under siege in 1942.

This is as much a memoir of the music which affected the writer during major events, and created powerful resonant memories of the times he lived through. It references the power of U2’s Miss Sarajevo over so many people who spent time being changed by witnessing life in that city as the rest of the world carried on as normal.

The final chapter brings us to Paris’ Bataclan theatre the night Isis massacred members of the audience on what Graham Nash calls music’s Kristallnacht.

Nash still can’t quite answer his question about how music works its magic. But referring to the work he produced with David Crosby, Stephen Stills and Neil Young he tells the author: “This is not Bach, Mozart or Beethoven but…. people have said we are the soundtrack to their lives…It’s a fantastic compliment.”

This book is an ambitious exploration of the soundtrack of Vulliamy’s eventful life and how much music inspired him to keep asking, “what is going on?”
Mark Brennock reported from Bosnia for The Irish Times in 1995 and 1996. He is director of public affairs at Murray