Spain is not the right place for me, says Eduard Márquez, ahead of his appearance at Cúirt 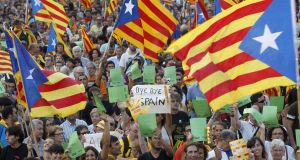 I am a Catalan writer and I want independence for my country. Why? First, because I feel Catalan. Not German, not Italian, not Irish, not Spanish. Catalan. I think it is easy to understand. It is an emotional issue. Catalonia embodies my identity: my family, my landscapes, my memories, my language. Second, because after the events of the last months, I no longer want to live in a country that does not let people decide their future, and that responds to the requests of people who think differently with police violence or judicial repression. And here the political and social issue begins and needs a bit of historical explanation.

At the beginning of the eighteenth century, King Charles II died without offspring. The succession of the Spanish crown originated a war in which the majority of European countries participated. In the Iberian Peninsula, the institutions of the Crown of Aragon gave their support to Archduke Charles of Austria, but Castile opted for Philip of Bourbon, the representative of the French monarchy. The supporters of the archduke were defeated in the battle of Almansa (1707) and the Bourbon armies occupied the Valencian Country and the Kingdom of Aragon. Philip V abolished the institutions of these kingdoms and began to repress their populations. In 1713 the European monarchies signed the Treaty of Utrecht, which ended the war in Europe. Philip V was recognized as king of Spain, in exchange for territorial and economic concessions. However, Catalonia maintained its resistance. The Catalans knew that Felipe V would abolish the constitutions and the institutions of Catalonia if he invaded the country. Barcelona resisted the siege of the Bourbon army for months, but finally fell, defeated, on September 11, 1714. This day is the national day of Catalonia. A day of defeat turned into a day of celebration. To not forget. I think this explains a lot about our character.

For decades, the political and cultural resistance of Catalan people, often silent and clandestine, have survived wars and dictatorships and has slowly expanded their social strength. This movement, patient and peaceful, especially reinforced by the struggle during the forty years of General Franco’s dictatorship, has been growing more and more, especially since 2010, when the Constitutional Court remove parts of the Statute of Autonomy of Catalonia voted and accepted in referendum by the Catalan people in 2006. Since then, year after year, the petition for a referendum to decide the future of Catalonia has been gaining followers, but the Spanish government has not accepted this request. The only answer has been a resounding “NO”. “NO”, because theoretically the Spanish Constitution says that it is not possible. “NO”, because the unity of Spain is unquestionable. “NO”, because “NO”.

Then, since dialogue was impossible, the Catalan government decided to organize the referendum on October 1, 2017. More than two million people went to vote and had to defend the ballot boxes from the Spanish police, who had received orders to remove them. The result was clear: more than ninety percent “YES” in favour of independence and more than nine hundred people injured. The images of violence spread around the world, but the Spanish government denied the facts and began a political and judicial campaign against the independence movement. The consequences of this political action has been the dissolution of the Catalan Parliament, the cessation of the Catalan government and the call for new elections on December 21st. That day the parties in favour of Catalan independence won the elections again, but despite everything, the Spanish Supreme Court, guided by the Spanish government in yet another demonstration of the lack of separation of powers, has not allowed the appointment of a new president of the Catalan government.

At the moment, the consequences of the judicial action are nine people in jail awaiting trial (six members of the former Catalan government, the president of the former parliament and two civilian leaders), seven people in exile (in Belgium, Germany, Scotland and Switzerland), more than two hundred high officials of the administration dismissed and more than seven hundred mayors prosecuted. And all within a context of growing repression against freedom of expression and of criminalization of social movements that defend the Republican cause. Social movements that, under the banner of non-violence, fight against political and judicial repression and seek new spaces for political and social dialogue, but are nevertheless accused of carrying out acts of terrorism.

So I think that, all in all, the option of independence is already unquestionable. The events of the last few months make it impossible to go back. We can not go back to being an autonomous community in a state that does not understand or respect the emotional, political and cultural aspirations of more than two million of its citizens and intends to move forward as if nothing had happened. Too much incomprehension, too much repression, too much injustice, too much pain, too many frustrated aspirations... Impossible. We need a new space of coexistence. And Spain, at the moment, is not the right place.

I am convinced, in addition, that this new space, free and independent, liberated from an immobile and anachronistic state, can be a good laboratory, a good test field, to explore new strategies for a Europe of peoples increasingly in need of new ideas and new projects. More politically ambitious, more socially just and more culturally enriching. And, in this sense, Catalonia could be the beginning of the most exciting revolution that Europe has experienced in recent years.