Lauren Child: Why you should let your children stare into space

Ideas take shape when the mind is drifting, so give kids room ‘to let their minds wander’ 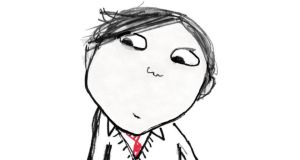 Lauren Child: Hubert Horatio, from How to Raise Your Grown-Ups

When Lauren Child was invited to be the UK Children’s Laureate in 2017, she spent a long time thinking about how she would define the position during her two-year tenure. As a writer and illustrator, she felt the need, of course, to champion the importance of books, of reading and drawing. However, she felt there should also be room to draw attention to one of the most vital, unsung seeds of creativity, “staring into space”, which she calls “the act of looking without purpose.”

It is when the mind is drifting, Child says, that ideas begin to take shape. In the overscheduled life of the modern child, “no one is giving them room to just let their minds wander.” You won’t discover the secrets of the universe in a text book or at piano lessons, but “in looking down at the things on the footpath or up at the clouds in the sky”.

It is easy to imagine the 53-year-old indulging in the luxurious space of a daydream when she was a girl. Growing up in Berkshire, she admits she lived “partly somewhere else, partly in my imagination. I was a very contemplative child”. As the middle girl of three, she was also “wary of everything, but I suppose that made me a good observer. There’s a usefulness to being in the background. You notice a lot. I didn’t always like it, but I think it has shaped the work I do. I am the type of person who might look at someone’s shopping basket and start to feel tearful as I decide what kind of life they are leading. I might be totally wrong, but it makes me feel sad anyway. That’s the kind of place where stories come from.”

Children just step into the world of imagination. It is beautiful. They can travel through time, transport themselves, find a story in any object

Child first burst on to the children’s literature scene in 1999 with Clarice Bean, That’s Me an anarchic middle-grade reader in picture-book format. It was heavy on illustration, and played with typography and text in a way that had not been seen before in children’s books, although it is commonplace today. Clarice Bean won the Smarties Prize, and Child became immediately prolific. She published I Want a Pet later that year, and Beware of the Storybook Wolves followed in 2000, as well as the first two books in the Charlie and Lola series, which would bring her recognition on TV as well as bookshelves. Within three years Child was one of the best-selling children’s authors in the UK.

The acclaim may have been immediate, but Child was not an overnight success. Indeed, after several false starts in various artistic disciplines, she had been hovering around the children’s books scene for almost a decade, trying to get work. “No one was interested in what I was doing. I would ask them what the problem was, and they would say ‘Everything’. I really felt it was a very hopeless situation,” she says with a giant smile as she recalls how “uncool people thought I was”.

In the meantime, Child was trying her hand at a variety of other pursuits. She “painted china tea-sets, did some window dressing, mural painting.” She started a bespoke lampshade business that never got up and running. She also worked as a spot painter in Damien Hirst’s studio.

“That was actually one of my favourite jobs. We were left alone in the studio all day with our instructions: how big the circles should be, where they should be placed, some on these huge canvases – you’d need a ladder – and some on these tiny ones. We would draw them and mix the colours and layer them up. There were many, many coats of paint, and I must have painted hundreds of spots. It sounds really boring, but it was actually a really useful experience because it was quite meditative. The process was mechanical and repetitive, but it allowed my brain to think about ideas I was working on.” It was staring into space, basically, with spots.

Those years spent scraping together a living infused Child’s work with a very particular kind of energy and a distinctive multimedia aesthetic. She started supplementing her drawings with snatches of fabrics from those pesky lampshades, photographs, newspaper clippings, and other found materials. She started playing with scale and textual layout to give visual emphasis to words and pacing. At this stage, she didn’t necessarily see herself as a children’s author in the making. She was just looking for a platform to showcase her illustration style.

However, when the character of Clarice appeared in her mind, she pursued it with “a renewed confidence”; certain, at last, that she was “doing something right for a change. Even if nobody wanted to publish it, I was really excited, for the first time in a long time, about what I was doing.” Eventually, Child managed to get an agent to take on the first Clarice Bean book, but even then it was five years before the agent could find her a publisher. By that time, Child had a whole series of books and ideas ready to roll out.

It is easy to understand why Child’s work appeals so strongly to young readers. It immerses us deep within the world of the child, with all its wonky logic and transformative magic. “The thing is,” Child says, “when you are writing in the first person as a child, you can just say what you want. If you listen to a conversation between children, you can immediately see how they just step into the world of imagination. It is beautiful. They can travel through time, transport themselves, find a story in any object. If you think of that from an adult perspective, well there’s something almost melancholy about it: you can’t just step back there, you are always aware that their rocket is really a chair.”

Indeed, one of the most common questions Child is asked - by adults - is where the characters’ parents are. (We meet the entire Tuesday family in Clarice Bean, but we never meet Charlie and Lola’s family.) Child’s answer: “They aren’t there.” The response sounds glib, but Child means it sincerely and laments the fact that children these days don’t enjoy the same freedom as her characters do, as she did when a child.

“When I was young,” she remembers wistfully, “my parents were around but they always had stuff to do. You could either muck in or get on with something else, and if you did, you were on your own with it, you had to be your own resource. If you were bored, you had to get out of it yourself, do something physical or find a place in your head.” You had to, basically, stare into space until your mind suggested something better to do.