Be prepared for onyx-dark prose, misogyny and twisted world views in this biting satire 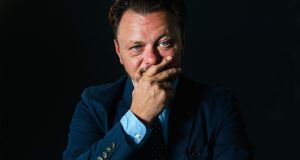 There are writers who are said to cut close to the bone, and then there’s John Niven. The Scottish novelist and provocateur doesn’t so much do that as take a chainsaw to the nearest leg and gleefully spray shin marrow all over the wall. His ninth novel is a sequel to 2008’s Kill Your Friends, often pitched as the vicious child of Bret Easton Ellis’s American Psycho and Walter Yetnikoff’s Howling at the Moon.

Certainly, Kill Your Friends – set in the fast lane of the 1990s music industry in London, before its nosedive – boasted the very best of both titles. With the ruthless, scabrous and occasionally murderous A&R Steven Stelfox at the helm, it was an intoxicating brew of merciless industry exposé, migraine-inducing hedonism, graphic psychopathy, glamour and fragile masculinity.

Niven’s many years of experience in the music industry also stood him in supremely good stead, as he delivered a satire on the business that was a rare thing: bang on the money.

If you enjoy a character saying the unsayable, doing the unthinkably awful, you’ll find plenty to enjoy here

Alas, for all of Niven’s unflinching and visceral prose, the ensuing film adaptation, made in 2015, was curiously bloodless. With an all-too-bright-eyed Nicholas Hoult playing the monstrous Stelfox, the glorious Machiavellian interiority of Stelfox lagged second to the spectacle of sex, drugs and rock’n’roll. A shame, really, because Stelfox is an unforgettable creation on the page. And in today’s climate of snowflakes, Twitter and Trump, Stelfox has more mill-grist than ever before.

It’s a testament to his odiousness that, two decades after the implosion of the music industry, Stelfox hasn’t been felled like many of his charges, or felled like his peers. Far from it: he is now a multimillionaire and a household name, thanks to a TV talent show, lapped up by billions of plebeian pop fans worldwide. Stelfox is so rich that he barely needs to work any more, but does the odd nixer as a consultant, purely for merriment and the odd score-settling exercise.

An old friend, James Trellick, has also clawed his way out of the 1990s unscathed, and is now president of Unigram, one of the biggest record labels in the world. Stelfox is called upon to solve a problem in the shape of Lucius Du Pre, an oddball of a pop legend.

In a profile that should ring uncomfortably familiar to even the most cursory of pop fan, Du Pre wishes more than anything to change his skin colour, owns an expansive ranch with a theme park in its grounds and has bought the remains of the late John Merrick.

He routinely has young pre-teen boys over to his ranch for PG-rated films, theme park rides and sleepovers, during which he plies them with a sort of Happy Juice and rapes them. In the background lurks Dr Ali, Du Pre’s personal doctor, and rather trigger-happy with the prescription pad to boot.

But Du Pre didn’t bank on the opportunistic parents of one young pre-teen to record the incident and use it as blackmail fodder. Enter Stelfox, whose job it is to make the whole thing go away, and preserve Unigram’s marketplace position.

Niven does not disappoint and does not compromise

While in LA, Stelfox encounters the young A&R scout Crissy – a knowing and charming “boiler”, but a boiler nonetheless – who herself is attempting to sign an obscure Norwegian dance act intent on aligning with a more credible label. Itching for the chase and remembering the theatrical blood letting from the bad old days, Stelfox decides to wade back into A&R negotiations. Countless incarnations later, the music industry is still about chess moves, the long game and outwitting everyone: it’s Stelfox’s natural habitat and one that Niven writes about with genuine elan.

Given that this is a man who trolls Trump detractors simply for sport, it’s safe to assume that mass evisceration ensues. The fun is in finding out exactly how, and in this respect, Niven does not disappoint and does not compromise. Against the backdrop of seven-star hotels and Sultan palaces, the industry excess may have taken on a new sheen, though it’s no less visceral and queasy than before.

Those who baulk at salty, onyx-dark prose, misogyny and malevolent, often twisted world views should move on briskly so as to avoid offence. Niven has never been a writer to shy away from an opportunity to elicit genuine gasps; suffice to say he hasn’t started now.

Yet if you enjoy a character saying the unsayable, smashing every PC sentiment to smithereens, doing the unthinkably awful and all at breakneck pace, you’ll find plenty to enjoy here. Niven’s unflinching look at the American dream gone wrong, chainsaw squarely cocked at shinbone, provides quite the thrilling ride.