Michael Collins: a genius for sums as well as guns

As minister for finance, he crowdfunded a revolution with huge vision and work ethic to match 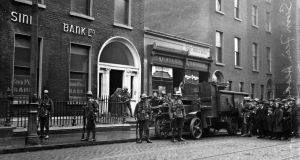 According to any number of biographers, we are variously told that Michael Collins was an organisational genius in political, military, intelligence, administrative and financial affairs. One might disagree with his politics, but the genius of Collins is untouchable, almost ethereal.

But ascribing genius to him is more convenient than insightful, and comes with a cost. It avoids the need to provide analytical insight. “Michael Collins was a financial genius” demands no analysis. And it leads to the military, intelligence and civil successes of the counter-state frequently being personified in Collins. There is also a cost to this personification of the period; other names become forgotten, valuable lessons are lost.

In researching my first book, Crowdfunding the Revolution: The First Dáil Loan and the Battle for Irish Independence, I took the approach of “things don’t just get done”. It was not from the back of a bicycle that Collins printed and distributed three million promotional leaflets or 400,000 copies of the Loan prospectus; maintained the loan registers; issued receipts for all subscriptions that reached head office; raised the equivalent of €25 million from individuals throughout the country, had the money couriered to Dublin and laundered into the commercial banking system.

The founders of the Sinn Fein Bank, the National Land Bank, which Collins envisioned becoming the ‘financial centre of Ireland’, and of the New Ireland Assurance business, exhibited the same passion, idealism and entrepreneurial spirit as any business start-up today. The same might be said of the founders of the counter-state itself.

As Minister for Finance, Michael Collins was a crucial element in all these enterprises. But was he an organisational genius? Before attempting to answer that question, it is necessary to understand the governance and management of the civil (and intelligence arms) of the counter-state.

For example, Liam Tobin, Frank Thornton and Tom Cullen managed the day-to-day operations of GHQ Intelligence. It was this experienced triumvirate – under the strategic direction of Collins – who transformed GHQ Intelligence into a professional and elite operating unit. Tobin and Thornton were two of the co-founders of New Ireland Assurance. They remained on the management committee of the business after taking a leave of absence from their full-time positions to join the Intelligence department. New Ireland survived and prospered through the most difficult part of the war of independence. The third annual general meeting took place in May 1921, two months before the truce. Sales had risen by 500 per cent during the previous year.

Government administration was in the hands of the secretariat headed by Diarmuid O’Hegarty, aged 27, clerk of the Dáil and secretary to the cabinet. It was he who was determined that the Dáil government would operate to the highest international standards, whatever the circumstances. He was a brilliant organiser with a first-class brain. Ernie O’Malley said that his “mind worked quickly, shrewdly and surely ... he used clear, clever imagery, often biting. I admired his type of quick intellect often disguised by a surface casualness.”

The Department of Finance operated out of a four-story Georgian building at 76 Harcourt Street. It had moved from the home of Sinn Féin at No 6. The move was required because it had become necessary to get more accommodation for the increased staff numbers working on the Loan. Following a raid in November 1919, Loan organisation continued in private homes and over shops, until new, albeit less salubrious, offices were located.

As Minister for Finance it was Collins who provided the strategic direction for the department. But it was people like Daithi O’Donoghue, a former high-ranking civil servant dismissed for refusing to take the oath of allegiance, who managed the day-to-day financial operations. It was O’Donoghue, after consulting with Collins, who made the payments, moved the funds and made the banking arrangements.

If Collins was an organisational genius it was because he surrounded himself with competence, supplemented by experienced professional advisers, like Donal O’Connor, a chartered accountant with offices on Westmoreland Street, who was appointed auditor to the Dáil Loan. He even attended the transfer of the gold reserve – over €1.5 million today – buried at dead of night at the back of Corrigan’s Undertakers on Camden Street to the home of Batt O’Connor in Donnybrook. Despite the difficulty of the time, the gold was counted, audited and tagged before the transfer was made under armed escort.

Systems, processes and controls were important to these professional revolutionaries. Not everyone appreciated the amount of paperwork this generated, especially some of the military leaders in the field, and it had some negative consequences. Ormonde Winter’s Raid Bureau was able to gather a substantial amount of information because “the Irish had an irresistible habit of keeping documents”. Winter, head of police intelligence, had paid a backhanded compliment to the organisational skills of the of the counter-state movement.

Work ethic was important to Collins. The demand for hard work featured in almost all of his correspondence regarding the Loan. Not every organising committee delivered to his high standards. He grumbled to Terence MacSwiney that “if you saw some of the particulars we were supplied with they would simply drive you mad”. He wrote to Cathal Brugha: “If you saw the bloody pack down there, & their casual, indefinite, meaningless purposeless way of carrying on”.

Not known for his patience, Collins spilled out his frustration at the slow progress of the Loan in a letter to Harry Boland in America: “This enterprise will certainly break my heart if anything ever will.”

Collins approached projects with a scale that matched his ambition. At 17, London beckoned because he wanted to live “in the world’s biggest city”. Six years later, he wanted to go to New York, which offered the one thing he had been looking for: “a fair chance to get ahead”. He thought big and acted big.

Collins set up an elaborate funding organisation for the Loan accompanied by an innovative marketing programme, including the use of film. And despite doubts when the Loan was floated whether it would be possible to raise so large a sum, the target was exceeded by 50 per cent. He was not the easiest person to work for and, as is often the case, was liked by those who worked most closely with him and disliked by those with whom he had only infrequent contact.

Was Collins an organisational genius? Yes, but not in a mythical way. Good recruitment, delegation, attention to detail and appreciation of processes and control procedures, combined with a scale of vision and an intense, almost manic work ethic, and a desire for social improvement in Ireland (through economic as much as political freedom) defined that genius. Collins loved Ireland “not in theory but in practice”, as Mary Frances McHugh wrote in the immediate aftermath of his death. Maybe there is a lesson in this for us all.
Crowdfunding the Revolution: The First Dáil Loan and the Battle for Irish Independence is published by Wordwell Press priced €20. Patrick O’Sullivan Greene has been an activist shareholder for almost20years, is an award-winning equity analyst, and is a qualified chartered accountant. He is also a co-founder, director and mentor of start-up companies.