With a book you are never alone, says novelist Anna McPartlin 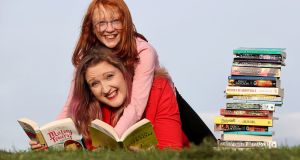 Katie Kirwan (11) with her mother Olivia, who is living with MS in Balbriggan, preparing for MS Ireland’s MS Readathon. Photograph: Marc O’Sullivan

My parents split up when I was five years old. My mother and I moved in with her mother who by then was in her late 70s. Less than a year later Mom was diagnosed with primary progressive multiple sclerosis.

Her illness progressed quickly after that. I remember her becoming unsteady on her feet, falling, lying on the ground and her legs shaking. I remember her walking with a cane and then a frame and pushing her up the stairs to bed before that became impossible so instead a bed was placed in the dining room downstairs. I remember the day a portable loo was installed under the stairs in the hallway.

Initially life became a little smaller as a result of Mom’s diagnosis. Aside from attending school I couldn’t stray too far from home because Granny was also unsteady on her feet. Mom became the brains and I became the arms and legs of the operation so understandably for maximum efficiency we needed to be together more than apart. I did have school friends and I remember playing with them, but mostly when not in school or shopping for groceries I was home.

Incidentally, my mode of transport was a pair of navy blue suede boot skates with a silver tick on the sides that made me feel like I could fly. I was an only child. A friend once described me to her mother as a “lonely child” but I was never that because I discovered books early in life and with a book you’re never alone.

As a treat every Saturday a friend of Mom’s would take us to O’Connell Street in Dublin city centre. There were only two venues we were interested in. Eason’s and McDonald’s, in that order. I’d be allowed to choose one book and I took this decision very seriously. Some nice man or woman would find a chair for Mom and she’d sit and wait and wait and then wait some more while I pulled books off the shelves and deliberated on what to pick. There are UN agreements that took less time to reach conclusion.

Falling in love with the first book of a series took the pain away and discovering there were six or seven more, that was the dream. Mom wouldn’t even need to ask for a chair I’d just run in and grab the second or third or fourth book in the series, pay at the counter and I’d be eating a McDonald’s burger (no gherkin) and chips and sucking down a chocolate milkshake with my new book tucked under my arm before you could say Jack Robinson.

Enid Blyton was a great woman for a series and I read everything she ever wrote. From her boarding school romps, The Twins of St Clare’s and Malory Towers, to her detective adventure series the Famous Five to the Secret Seven and even her lesser-known the Faraway Tree collection. I decided at one point that I wanted to attend boarding school, which was a little out of reach bearing in mind I couldn’t leave Mom and Gran for more than six hours a day.

When that dream came crashing down I did toy with becoming a young detective. This notion took further root upon discovering the Hardy Boys and Nancy Drew series and I spent a few months creating mysteries out of nothing at all. Poor Mom and Gran played along for The Case of the Missing Slice of Bread or The Great Sock Thief. Sadly, that case was never solved.

I was a big fan of short stories and fairy tales in particular and a sucker for anything with animals. If there was a talking toad, a friendly bear or a cheeky mouse featured, I was in seventh heaven. These characters became friends and they took me on adventures that broke me free of the walls of my home and the limitations of my reality.

I discovered that Ballymun library was a 15-minute walk from my door when I was about eight and from then on I’d make a pilgrimage there two or three times a week. I felt very grown up browsing in a library all on my own. I loved tracing my fingers along the stacks of books and the smell of the place. I loved the sound of the stamp as it hit the book, marking the date of return. For a while after that I thought about becoming a librarian and using one of my uncle’s old date stamps I practiced stamping books, walls, tables and even my neighbours’ dog’s ear while he feasted on half a Jaffa Cake I’d left as bait.

I adored Roald Dahl. I knew most of his books off by heart. The BFG, James & the Giant Peach, Matilda and The Witches are the books I’d return to time and time again but I also loved The Twits and Charlie and the Chocolate Factory. His work had a profound effect on me as it did on generations of children including the kids of today.

Thirty-three years ago Dahl launched the MS Readathon. What an incredible and groundbreaking fundraising idea, encouraging children to unlock a passion for reading while collecting funds for MS services that are invaluable to people like my Mom and me. Obviously this year is a challenge but MS Ireland is meeting it by moving everything online. The support and buy-in from schools, teachers and students has been extraordinary over the years. The Readathon helps MS Ireland help those who are most vulnerable and they need their army of readers now more than ever.

This year they are inviting adults to join in. Covid-19 has made everyone’s life a little harder and maybe even lonelier but books have the power to shine light into darkness and maybe there are many who didn’t develop a passion for reading as children but have time on their hands now. If that describes you why not give it a go? Maybe you’ll discover, like I did, that with a book you are never alone.

As for the kids, they’re making the best of a bad lot and they are more isolated from their friends and extended family than ever before. So what better time for them to discover new worlds and break free from of the walls of home, the limitations of our current reality and help their fellow man along the way?