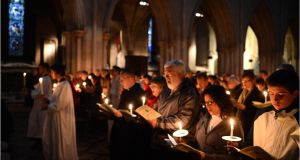 A candlelit service of music and readings in St. Patrick’s Cathedral to mark the start of Advent in Dublin. Photograph: Dara Mac Dónaill

Looking at the Protestants of independent Ireland as a cultural or folk group, rather than merely a selection of Protestant denominations, gives us great insight into their minority experience, both pre- and post-independence.

For years, the Protestants of Ireland (particularly Anglicans) were disproportionately represented among the more educated, wealthier and more privileged elements of society.

This group is, however, and always has been, socio-economically diverse. It has not always been politically expedient for anyone to acknowledge this diversity, with the result that the lives of “ordinary” Protestants (small farmers, labourers, members of the urban working class, etc.) remain little discussed.

What Irish Protestants of all social backgrounds often share is a sort of ambivalence about their cultural or ethnic identity and the desire to assert themselves as truly Irish while at the same time recognising that history and their cultural experiences are “different” in various ways.

One of the most intriguing cultural manifestations of this ambivalence and assertion of Irishness is found in the view of St Patrick as Ireland’s original Protestant. Given that Patrick was engaged in missionary work in Ireland long before the Reformation, it is interesting to explore this point of view, which developed as an important origin story of the Protestants of Ireland, helping them to assert the essential Irishness of their faith while also making a firm statement about identity.

The idea that the Anglican Church of Ireland is the true Celtic religion of Ireland, founded by St Patrick in the fifth century, crystallised in the 18th century (having been originally introduced by Archbishop Ussher in the 17th century) in the context of a surge of intellectual interest in Gaelic culture. Later, during the Gaelic revival and intense interest in Ireland’s Celtic past, various Protestant intellectuals and churchmen studied Irish as part of their quest to prove that St Patrick was a Protestant. They maintained Catholicism entered Ireland only in the 12th century, under Henry II, ushering in a dark period that ended when the Protestant faith reintroduced ‘true’ Christianity to the island.

This belief came to be very important to the self-image of the Church of Ireland and the Presbyterian church in particular. In 1885 a group of clergymen anonymously published a Historical Catechism, on the title page of which the words Erin Go Bragh appear, in which they discuss their belief that Patrick introduced Protestantism to Ireland. They also claim numerous other Irish saints for the Church of Ireland, including Columba, Columbanus and Aidan, and claim that the arrival of Catholicism in 1172 forced “a series of calamities hardly to be equalled in the world” on Ireland, from which the Irish could only be saved by a return to the “ancient [Protestant] faith”.

The Presbyterian Church in Ireland also claimed St Patrick. A history of Presbyterianism published in 1959 affirms that his teachings “are in harmony with evangelical Christianity”, and that Patrick’s form of Christianity, interpreted as being close to Presbyterianism, was not subjected to “Roman practice” until after the Anglo-Norman invasion of Ireland in the 12th century.

These ideas – deeply irritating, for obvious reasons, to the Catholic clergy and to many politicians in a new, and deeply religious, Catholic state – persisted.

In 1929, celebrating the centenary of Catholic emancipation and still rejoicing in the recently acquired independence of the 26 counties, the Catholic Archbishop of Tuam hoped that “they would hear no more about the laughable claims of the so-called Church of Ireland to be regarded as the descendant of the […]Church of St Patrick”.

This understanding of Patrick was not just a matter for scholars and men of the church, but also widespread at a popular level. When a young Seán O’Casey asked his mother to reassure him that they were really Irish, she said, “if your poor father was alive he’d show you in books solid arguments […]that St Patrick was really as Protestant as a Protestant can be”. One of the interviewees cited in Different and the Same: a folk history of the Protestants of independent Ireland remembered a family friend for whom this view of Patrick was also very important:

“When I was about 13 or 14 an old lady was staying at our house […]The subject of St Patrick came around and what religion he was. I said that I thought he was a Catholic when she rounded on me. ‘He was a Presbyterian,’ she snapped, ‘and everybody knows it.’ I tried to point out that there were no Presbyterians as such when St Patrick was around, but she would have none of it.”

Leaving aside matters of theology, the Protestant claim to Saint Patrick is a strong expression of Irishness and became, over the years, a compelling folk narrative of origin analogous to those of many, diverse, cultural groups that want to express their feelings of identity and belonging by finding themselves, their values and their history reflected in a potent figure of mythological proportions and importance. The historical importance of this viewpoint shows us, among other things, the huge power and resonance of such figures to how groups understand and define themselves culturally.
Deirdre Nuttall is the author of Different and the Same: A Folk History of The Protestants of Independent Ireland (Wordwell, €25)

Poem of the week: A Balance by Larry Stapleton