Meet the Irish author who is reinventing Doctor Who 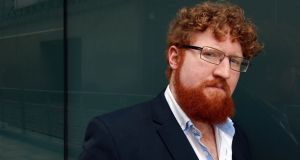 Dave Rudden: “I came to Doctor Who through the novelisations. I didn’t know it was a TV show as a kid.” Photograph: Nick Bradshaw

These are heady days for fans of eccentric British time travellers. Doctor Who has just returned to our screens in the mildly controversial incarnation of a yellow-braces-wearing Yorkshirewoman. To a not-insignificant proportion of the planet’s population, this is an event of interstellar magnitude.

Among those cheered by the historic casting of a female in the role is Irish YA author Dave Rudden. “Anytime someone suggests a reboot of an established character with a woman or a person of colour, it’s a great idea,” he says. “These characters have been around for ages. We’ve had 26 James Bond stories, 22 Marvel films without a female main character.”

Rudden can empathise with the jitters Jodie Whittaker has surely experienced as she prepared to be judged by one of the more hardcore communities in science fiction.

At the invitation of the franchise’s custodians at Puffin and the BBC, he has written a new anthology of Doctor Who stories for kids (he has no idea why he was chosen beyond hypothesising that someone must have felt he would do the franchise justice). Get even the tiniest detail wrong – he is, of course, confident he hasn’t – and the internet will emit a mighty howl of outrage.

“I know I am stepping into an established canon,” says Rudden. “People have a preconceived notion as to what a Doctor Who short story should be. And I am little nervous about that. There are people who will say, ‘that’s not how [iconic Fourth Doctor] Tom Baker would speak . . . I hope I get it right. If not, I’ll take the criticism on board.”

Doctor Who: Twelve Angels Weeping represents another feather in the cap of a writer who has built a fanbase with his Knights of the Borrowed Dark fantasy saga (a TV adaptation is in the works). The collection also makes a small piece of sci-fi history. It’s the first Dr Who book to feature Whittaker’s Thirteenth Doctor, rainbow braces and all.

Initially, the BBC was dead against Rudden including the latest incarnation of the titular Time Lord. However, when Rudden outlined the heartbreaking gist of the tale he had created for her – about a young girl in 1960s Dublin bullied by nuns at school because she loves science – they overrode their programming and said yes.

“I asked could I do a Thirteenth Doctor story and the response was in the negative,” he says. “This was last February. They weren’t sharing scripts for the new series and told me her personality hadn’t been set in stone yet. They were still at the planning stages for the next season.”

Rudden had meanwhile mentioned to a friend he was writing a Doctor Who book. With widened eyes, she revealed her mother would be delighted. She had been a huge Whovian as a child, only to be told by the nuns at her school in Ringsend that it was inappropriate for a girl to be interested in science and time-travel.

She had been a huge Whovian as a child, only to be told by the nuns at her school in Ringsend that it was inappropriate for a girl to be interested in science and time-travel

“I asked my friend if she wanted me make her mother part of the Doctor Who universe. An idea appeared and it started writing itself. And who else would meet a 10-year old girl at the end but the Thirteenth Doctor?”

The focus of Twelve Angels Weeping is on some of the iconic monsters with which the gallant Gallifreyan has tangled across the years (there is also a vague Christmas theme, with several of the yarns unfolding at midwinter). Cybermen, the terrifying Weeping Angels (hence the title), Daleks who still can’t climb the stairs . . . they’re all here, as thrilling, discombobulating and complicated as on the screen.

“Obviously people know about Daleks and Cybermen,” says Rudden. “However, there are so many episodes that introduce a world, a bunch of characters and a monster and you never see them again.”

Doctor Who has one of the most labyrinthine mythologies in science fiction. Alongside the Thirteen Doctors, there have been dozens of villains, hundreds of monsters, thousands of planets. There’s a lot to trip-up even the most knowledgeable Whovian.

Nothing was left to chance. Rudden’s manuscript was scrupulously fact-checked by the BBC for continuity inconsistencies – and to ensure it didn’t tie the hands of writers of the show going forwards. Having created his own self-contained reality with Knights of the Borrowed Dark, he understood the importance of not breaking any of the furniture as he tiptoed through the Doctor Who universe.

“They generally try to save the Doctors meeting each other for anniversaries, so that’s not really something you can do. And there were a lot of little things.

“There is a story about Cybermen and my Cybermen have barcodes for names. And they were like, ‘do Cyberman have barcode names? Can you do that?’ I had to say that this particular breed of Cyberman were like that in order to get away with it.”

Doctor Who was off the air when Rudden, who is 30, was growing up in Cavan. Thus he missed out on the quintessential late-1970s and early-1980s childhood experience of having seven shades of Skaro scared out of him by the plastic binliner monsters of the Tom Baker/Jon Pertwee/ Peter Davison era.

“I came to Doctor Who through the novelisations,” he says. “I didn’t know it was a TV show as a kid. I was reading all these tie-in novels thinking, ‘who is this Doctor character. What’s going on?’ It was weird and dark and strange and there was a revolving cast of characters.”

Doctor Who beamed into his life at a crucial time. A geeky kid in Bawnboy, Co Cavan, (population 250), Rudden was bullied horribly. He became socially anxious, a condition that continued to affect him while he was studying at St Patrick’s College in Drumcondra, to the point that he began self-harming. Doctor Who’s message that it was okay to be an outsider represented a ray of light in the gloom.

“Doctor Who doesn’t have a six-pack, he speaks very quickly. He’s confident but isn’t a romantic lead. It’s not all about getting the girl. It’s about showing up and helping others.”

Doctor Who doesn’t have a six-pack, he speaks very quickly. He’s confident but isn’t a romantic lead. It’s not all about getting the girl

He lives in Dublin with his fiancee, Tramp Press publisher Sarah Davis-Goff. As a successful writer who also runs popular workshops for kids, Rudden is getting by. But given the property crisis and the attitude of the banks towards the creative classes, he doesn’t expect he will be applying for a mortgage any time soon.

“I say “yes” to every single piece of work going. I contributed to the audio book for Twelve Angels Weeping because it would help pay for some cereal. Especially with the rental situation, it’s very up and down. There is a sub-strata of stress in every author’s life that’s not about their next book or being able to create something. You have no security. You’re only as good as your next work. That’s terrifying. It’s hard to create good art with that.”

With his flaming Viking beard and black attire, Rudden looks like he’s beamed in from a fantastic tale himself – though perhaps something by Tolkien rather than a Doctor Who romp. As we’re all nerds here I ask if, in the unlikely event of there ever being an Irish Doctor Who, who would be the perfect choice?

He seems a bit startled at my suggestion of Mamma Mia-vintage Pierce Brosnan moving into the Tardis but is polite enough to keep his shock and existential horror to himself.

“Fiona Shaw would be amazing – and Ruth Negga would be incredible,” he says. “Aidan Turner would be really interesting. Tom Vaughan-Lawlor would be good. I’d love to see an Irish Doctor. The closest was when David Tennant was being regenerated and asked, ‘am I a ginger?”

Doctor Who: Twelve Angels Weeping is published by Puffin