Mary Trump: How my family created the world’s most dangerous man 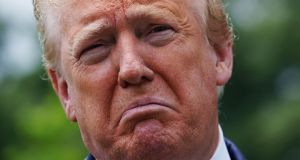 A niece of President Donald Trump will divulge a series of damaging stories about him in an upcoming book, the first time that the president could be forced to grapple with unflattering revelations by a member of his own family.

The niece, Mary Trump, will release the book, Too Much and Never Enough: How My Family Created the World’s Most Dangerous Man, on July 28th, according to her publisher, Simon & Schuster. The Daily Beast first reported on the book on Sunday. In the book, Mary Trump, who is 55, will say she was a primary source for the New York Times’s coverage of Trump’s finances and provided the newspaper with confidential tax documents. A spokeswoman for newspaper declined to comment on Sunday. The White House did not respond to a request for comment.

Three journalists from the New York Times received the Pulitzer Prize for explanatory reporting last year for their work providing an unprecedented look at the Trump family’s finances and contradicting Trump’s image as a self-made billionaire. Mary Trump is the daughter of Fred Trump jnr, the president’s older brother, who died in 1981. She has mostly kept out of the public eye, except for a family feud over the will of the Trump family patriarch, Fred Trump snr, who died in 1999.

A book by a member of the president’s own family is likely to be a lightning rod. Trump is facing criticism for his handling of the pandemic and US protests against police brutality

Several former White House aides and Trump administration members have written books that have been problematic for the president, including the former FBI director James Comey; Andrew McCabe, a former deputy FBI director; Cliff Sims, a former Trump aide; and an anonymous official who published a scorching indictment that questioned the president’s fitness for office.

Publishers have made a small fortune from tell-alls about and journalistic investigations of the Trump administration. Simon & Schuster has already released a handful of books with damaging information about the president and his family, among them Bob Woodward’s Fear: Trump in the White House, which sold more than a million copies in its first week; Unhinged: An Insider’s Account of the Trump White House, by Omarosa Manigault Newman, a reality-TV star and former Trump adviser; and, recently, The Art of Her Deal, an unauthorised biography of Melania Trump by the Washington Post reporter Mary Jordan.

This summer Simon & Schuster is also publishing a memoir by John Bolton, Trump’s former national-security adviser. The book’s release has been complicated by disputes about what the Trump administration contends is classified information. The White House is expected to give Bolton a redacted version of his manuscript by Friday, which would be four days before the book’s current publication date. In his memoir, Bolton recounts how the president held up security assistance to Ukraine as leverage to get officials there to take up investigations into Democrats, including the Bidens – a scandal that led to the president’s impeachment. (Simon & Schuster also published Trump’s own campaign book, Great Again, through its imprint Threshold Editions.)

A book by a member of the president’s own family is likely to be a lightning rod. Trump is facing criticism for his handling of the pandemic and the protests across the United States against police brutality, and his niece’s book is scheduled to come out just a few months before the US presidential election.

In the suit that she and her brother filed over the will of Fred Trump snr, they claimed that Donald Trump and his siblings had exercised “undue influence” over the distribution of Fred Trump’s estate, which was worth hundreds of millions of dollars. In a rare interview with the New York Daily News in 2000, Mary Trump blasted her uncle and his siblings. “My aunt and uncles should be ashamed of themselves,” she said. “I’m sure they are not.” – New York Times

Anne Enright: ‘I looked at how men manage their confidence and took a few leads’

Anne Enright: ‘I looked at how men manage their confidence and took a few leads’
4

Does religion deserve to be treated as a joke?
5