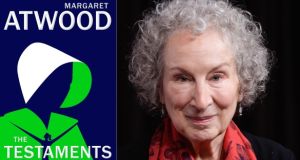 Margaret Atwood’s The Testaments is one of the most eagerly awaited books in years.

Hundreds of readers in the US have received early copies of Margaret Atwood’s heavily embargoed follow-up to The Handmaid’s Tale, The Testaments, after copies were shipped out early by Amazon.

Security around the novel had been as tight as anything mounted for JK Rowling or Dan Brown’s blockbuster releases – the judges for the Booker prize, who shortlisted The Testaments for the award on Wednesday, were warned they would be held liable if their watermarked copies leaked. But since Tuesday, readers have been posting images on Twitter of their freshly delivered copies, a week before the novel’s official release on September 10th.

The Guardian understands that despite the measures that had bookshops promising to store copies of the novel in a secured area until publication day, around 800 orders were shipped early, but only in the US.

In a statement, The Testaments’ publisher Penguin Random House said the cause was “due to a retailer error which has now been rectified”.

“We appreciate that readers have been waiting patiently, in some cases for more than 30 years, for the much anticipated sequel … In order to ensure our readers around the world receive their copies on the same day, our global publication date remains Tuesday 10 September,” it said.

Amazon UK declined to comment on the leak, forwarding queries to their US counterparts.

The breaking of the embargo means the novel’s contents are are reaching the public domain, with glowing reviews published online on Wednesday. Calling the novel a “fleet-footed sequel” in which Atwood’s “sheer assurance as a storyteller makes for a fast, immersive narrative that’s as propulsive as it is melodramatic”, the New York Times review revealed that the novel explores the “intertwined fates” of Offred, narrator of The Handmaid’s Tale, her two daughters, and the disciplinarian figure Aunt Lydia.

An extract from the novel published by the Guardian unveils further details of Atwood’s three narrators: Aunt Lydia, who tells us that “over the years I’ve buried a lot of bones; now I’m inclined to dig them up again – if only for your edification, my unknown reader”, and two young girls.

One, who is adopted and lives within the dystopian state of Gilead, has “a hazy memory of running through a forest with someone holding my hand”. She reveals details of her life under the regime, where girls must have “arms covered, hair covered, skirts down to the knee before you were five and no more than two inches above the ankle after that, because the urges of men were terrible things and those urges needed to be curbed”. The other lives outside Gilead and discovers on her 16th birthday that “I was a fraud. Or not a fraud, like a bad magician: a fake, like a fake antique. I was a forgery, done on purpose.”

Atwood, who will take part in a live event screened across hundreds of cinemas around the world next Tuesday to mark The Testaments’ publication, has so far made only one public statement about the novel: “Dear Readers: Everything you’ve ever asked me about Gilead and its inner workings is the inspiration for this book. Well, almost everything! The other inspiration is the world we’ve been living in.”

On Wednesday it was also announced that streaming company Hulu and MGM will be developing The Testaments for the screen. In an interview with Atwood for the new book, Time reported that Bruce Miller, showrunner for Hulu’s award-winning adaptation of The Handmaid’s Tale, is currently in talks over how to handle the new material in the sequel. Hulu or MGM are yet to confirm whether the events in The Testaments would be worked into the existing show, starring Elisabeth Moss as the Handmaid Offred. – Guardian