Winner of £50,000 prize won last year by Anna Burns to be revealed next month 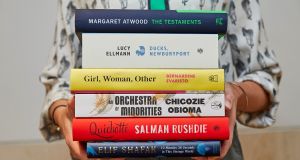 The books that have been shortlisted for the 2019 Booker Prize. Photograph: The Booker Prize/PA Wire

This year’s Booker Prize is shaping up to be a heavyweight battle, with two former winners, Margaret Atwood and Salman Rushdie, in contention alongside Lucy Ellmann’s Ducks, Newburyport, which would be the longest winning novel in the prize’s history at 998 pages, 166 pages longer than The Luminaries by Eleanor Catton, in 2013.

Whatever about length, there is a breadth to the shortlist that seems almost a rebuke to the narrowing horizons of Brexit Britain.

It offers an insight into different worlds from the dystopian setting of Gilead, the monologue of an Ohio housewife and the tragicomic tale of a travelling salesman in America; to mostly female, mostly Black, British lives across generations, the trials of a young Nigerian man on a quest to improve his prospects and true allegiances in the brothels of Istanbul.

As well as the Canadian Atwood, Indian Rushdie and Edinburgh-based American Ellman, also in contention are acclaimed Turkish author Elif Shafak for 10 Minutes 38 Seconds in This Strange World; Nigerian Chigozie Obioma for An Orchestra of Minorities, a remarkable second Booker shortlisting alongside his debut, The Fishermen; and Anglo-Nigerian author Bernardine Evaristo for Girl, Woman, Other.

Atwood’s The Testaments, her sequel (34 years later!) to The Handmaid’s Tale, is not published until next Tuesday but is already this year’s most anticipated fiction title. All we know is that it is set 15 years after Offred’s final scene in The Handmaid’s Tale and is narrated by three female characters. Rushdie’s Quichotte is a reworking of Cervantes’s Don Quixote set in today’s US. Atwood won the 2000 Booker Prize for The Blind Assassin and was also shortlisted three times (but not for The Handmaid’s Tale). Rushdie won the 1981 Booker Prize for Midnight’s Children. In 1993 it was judged to be the Booker of Bookers, to mark the 25th anniversary of the prize and in 2008 the Best of the Booker to mark its 40th. He too was shortlisted three times.

Chair of judges Peter Florence said: “The common thread is our admiration for the extraordinary ambition of each of these books. There is an abundance of humour, of political and cultural engagement, of stylistic daring and astonishing beauty of language.

“Like all great literature, these books teem with life, with a profound and celebratory humanity. Anyone who reads all six of these books would be enriched and delighted, would be awe-struck by the power of story, and encouraged by what literature can do to set our imaginations free.”

Night Boat to Tangier by Kevin Barry, the only Irish novel longlisted for the prize, which was won last year by Belfast author Anna Burns for Milkman, did not make the cut. Burns’s Milkman, about a young woman preyed upon by a paramilitary in Troubles-era Belfast, has sold more than half a million copies since it won the Booker last October.

Atwood is probably the frontrunner but Ellman is the dark horse in the field, a remarkable achievement for her tiny publisher, Galley Beggar Press in Norwich, which also first published Eimear McBride.

The Testaments, Margaret Atwood (Chatto & Windus)
“There is a strange pleasure in knowing the secret of the publishing juggernaut that is The Testaments, and an exquisite agony in being unable to share it yet. So this: it’s a savage and beautiful novel that speaks to us today with conviction and power. The bar is set unusually high for Atwood. She soars. I can’t wait for Saturday when everyone can read it.” Judge Peter Florence

Ducks, Newburyport, Lucy Ellmann (Galley Beggar Press)
“An extraordinary achievement of wit and imagination detailing the life and inner reasoning of a contemporary and conventional American woman. The manner in which the narrator’s thoughts are conveyed is the principal achievement of this astounding novel. This isn’t just one of the outstanding books of 2019, it’s one of the outstanding books of the century, so far.” Declan O’Driscoll, The Irish Times

Girl, Woman, Other, Bernardine Evaristo (Hamish Hamilton)
“A must-read about modern Britain and womanhood. This is an impressive, fierce novel about the lives of black British families, their struggles, pains, laughter, longings and loves. Her style is passionate, razor-sharp, brimming with energy and humour. The language wraps the reader by force, with the quality of oral traditions and poetry.” Judge Xiaolu Guo

An Orchestra of Minorities, Chigozie Obioma (Little Brown)
“The writing is lyrical in places, knife-sharp in others, and it’s a testament to the strength of the core story that long descriptive passages – such as those about the landscape, or poultry keeping – can maintain the same engaging fluidity as far more intense scenes.” Henrietta McKervey, The Irish Times

Quichotte, Salman Rushdie (Jonathan Cape)
“Quichotte lacks, above all, the attention to language that Cervantes brought to his sublime work and the charm of his main character, however deluded he became. Quichotte can only strive for a magnificence that Don Quixote has in abundance.” Declan O’Driscoll, The Irish Times

10 Minutes 38 Seconds In This Strange World, Elif Shafak (Viking)
“Although the depth to which we can know each character is - perhaps inevitably -marred somewhat by its ambitious scope (six lives in 10 minutes), as with all of this author’s works, it is fuelled by a vivid, sensual passion and enriched by her signature fusion of fact and fiction.” Helena Mulkerns, The Irish Times