‘The story is as clever as it is emotional, with the cleverness hidden in its simplicity,’ said judge Kit de Waal 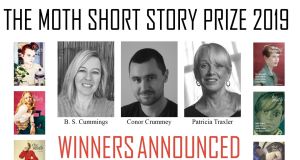 Conor Crummey, this year’s winner: “I have stewed with the idea of sending stories out into the world before, but never quite had the courage.”

Author Kit de Waal has chosen first-time fiction writer Conor Crummey’s story Journeys as the winner of the Moth Short Story Prize 2019. “At no time was I aware of the words on the page,” said de Waal. “I was on a journey, I was in a taxi, I was frightened for my life … The story is every bit as clever as it is emotional, with the cleverness hidden in its simplicity.”

Crummey, who was born and grew up in Belfast, will receive €3,000 from The Moth for his story. Conor now lives in London, where he is a lecturer in public law at Queen Mary University of London, and is completing a PhD at University College London in legal philosophy and constitutional law.

“To have drawn praise from a writer of Kit de Waal’s talent and standing, and to see my story in a publication that has done as much for Irish writers as The Moth, is the most astounding and unexpected affirmation I could have imagined,” said Crummey. “Thank you to Kit, to The Moth, and to anyone who might read this. I have stewed with the idea of sending stories out into the world before, but never quite had the courage. If anyone has contemplated doing the same, go for it! You never know what might happen.”

BS Cummings was awarded the second prize – a week at the luxurious writers’ retreat, Circle of Misse, in the Loire Valley in France, plus €250 towards her travel expenses – for her story Roots. De Waal described Roots as “an original story in an entirely convincing world, with some beautiful touches and a strong sense of place. The restraint in the telling is beautiful, heightening the sense of tragedy and loss – entirely believable.”

Cummings is a short story writer born in the UK and now living in South Australia. She has had stories published in both the UK and Australia, including the Big Issue and the Bath Short Story Anthology. She has also been shortlisted in the Overland Story Wine Prize and received three special commendations from the Scarlett Stiletto Crime and Mystery Short Story Awards. She is currently working on a longer work of fiction – a supernatural thriller set in a remote Australian school.

The third prize, of €1,000, goes to Patricia Traxler’s story Egg. “Very well balanced and well crafted. A story that you want to read again as soon as it’s over,” according to de Waal, “it brings the reader right up close to passion and its loss, loneliness and despair. A very unusual take on a subject we all think we know, but this is fresh and exciting.”

Traxler, a two-time Bunting Poetry Fellow at Radcliffe, is the author of four poetry collections and a novel, Blood. Her writing has appeared widely, including in The Nation, The Boston Review, Agni, Ploughshares, Glimmer Train, the LA Times and Best American Poetry. She has read or served as resident poet at many universities, including Ohio State, Harvard University, the University of Montana, Utah State and the University of California San Diego. Traxler received the 2019 Kansas Book Award in Poetry for her fourth volume, Naming the Fires. Egg is part of her forthcoming short story collection, I’ll Always Love You (unless you love me, too) which will be published later this year. This is her first publication in an Irish magazine.

Traxler described winning the prize as “a sort of homecoming”. “My Irish grandmother, Honora (Nora) Barry Dunne, was a poet from Whitegate, Co Cork who immigrated to the US in her twenties. She lived with us during a lot of my childhood, and she and I became very close. And of course it was she who gave me poetry … I think Gran would have been absolutely thrilled to see her granddaughter published in an Irish literary magazine.”

The three winning stories appear in the autumn issue of The Moth, available to purchase in select bookshops and online at themothmagazine.com.