What if the person you take refuge with is just as dangerous as the killer on the street? 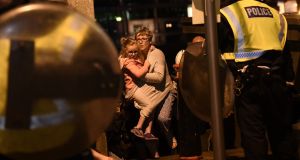 People are led to safety away from London Bridge after a terrorist attack on June 4th, 2017. Photograph: Carl Court/Getty Images

I was in Donegal in June 2017 when the London Bridge attack happened. It was the bank holiday weekend and I was spending it with my family and a group of our friends in the little village of Maghery outside Dungloe. Eight adults and 11 kids all crammed into a house overlooking the Atlantic.

At the time, I was planning on taking a break from writing. Not just for a few days but for a few months, possibly even a year. After five years collaborating with my friend, Paul Perry – a fruitful working partnership that resulted in four novels, a screenplay and a clutch of short stories – I was starting to feel a little threadbare. We both felt it was time to bring our writing project to a close. My feelings at the time swung between relief and uncertainty, but above all I felt tired. I needed some time away from writing, a chance to immerse myself in other people’s fiction and allow the barrel of words and ideas to be quietly replenished.

The attack took place on Saturday night, but we didn’t hear of it until Monday. Locked in the cocoon of glorious isolation and frenetic activity, it was not until one of our group ventured into town to buy the papers that the news of the attack reached us. Three young men inspired by Islamic State had gone on a murderous rampage in south-east London. They had rammed pedestrians on London Bridge with a van, before running to the nearby Borough Market where they indiscriminately stabbed people outside pubs and restaurants. Eight people were murdered and many more were wounded before all three attackers were shot dead by the police.

I remember the shock of hearing about that attack. How the house around me seemed to fall suddenly silent. After Paris, after Manchester, you would think you would build up some level of resistance to such horror. But news of the London attack floored me. Even though none of my loved ones were caught up in the violence, it still felt enormously personal and close. Perhaps that’s because of the special place London holds in my heart. My parents met and married in London. My sister was born there. But for me, London will always be a place intimately connected with my youth, my coming of age. A place of wonder and discovery, of freedom and endless summer.

In June 1994, with my university finals behind me, I took the ferry to Holyhead with a group of my friends, and then the train to London. We rented rooms in a hostel in Victoria. We got jobs in various Pret A Manger outlets around the city. I spent the summer making sandwiches in the Pret on Regent Street, working among a mélange of different nationalities and cultures – Algerians, Australians and Indians, two born-again Christians from Nigeria, a dry-humoured South African, and a Bosnian refugee from the Balkan conflict who never spoke a word the whole time I worked there. The music in the kitchen ranged from U2 to Mariah Carey to Kraftwerk, depending on who was in control of the stereo that day. The occasional celebrity drifted into the shop – flotsam from the nearby BBC Radio Centre – and we were competitive over who served the most famous customers (I made a coffee for Simon Mayo once, not realising I would be interviewed by him 20 years later on his BBC Radio 2 show).

The work was poorly paid and often boring, but we lived for the evenings and the weekends when London came alive for us. We roamed the city from Crouch End to Brixton, from Hammersmith to Shoreditch, wherever the party took us.

The victims of the London Bridge attack were all young – only one of them was over 40. And only one of them was British – the rest were French, Spanish, Australian and Canadian. Some were tourists, some were living and working in the city. It was a hot night and the Borough Market was humming with activity, the pubs and restaurants were thronged.

I wasn’t there that night, but it was not hard to imagine the scene in the moments before the terror struck. It was utterly familiar to me. Perhaps that was why I found the news so devastating.

Afterwards, the police issued their chilling “Run, Hide, Tell” instruction to the public. My thoughts were snagged by the word “hide”, and in the days that followed, I heard and read many accounts of people who were forced to hide from the attackers that night. They hid in a cellar beneath a pub, in a room behind a kebab-shop, in toilets above a bar. They hid with strangers, some for hours, some for the whole night.

Even though I was taking a break from writing, when I read accounts of those people taking refuge, imagining the fear confined within those small spaces, something began to happen within me. The familiar itch of an idea forming.

Thriller writers trade in the currency of fear. We like to shred our readers’ nerves. This new modern terror visited upon our cities certainly incites that deeply-felt emotion. But I had no interest in writing about young men who carry out such murderous attacks. Their slavish devotion to their cause I find depressing. Nor did I wish to linger among the bloodshed and pain wreaked by their fanaticism. What interested me were the people hiding in those rooms. The strangers thrown together in the most unexpected and heightened circumstances. What were their stories? What drew them together and helped them find common cause? And because I am a thriller writer and drawn to the darker side of human nature, I began to ask the question: What if the person you take refuge with is just as dangerous as the killer on the street?

I was taking a break from writing. But sometimes real life cuts in and demands a story of its own.
Your Closest Friend by Karen Perry is published by Michael Joseph at €15