‘If there is one piece of work that should showcase your creative flair, it’s your bio’ 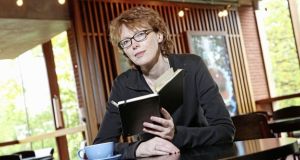 Rosemary Jenkinson: 'The great thing about being a writer is you will develop gluteal muscles that could crack a pine cone.'

1. If your writing’s not flowing, rip it up. For me, the most successful pieces are always the most free-flowing. If it’s a struggle, be aware that a reader will intuit that too, so pull the plug. After all, Robert Louis Stevenson started 393 works only to finish 27 of them. I honestly can’t think of any job other than writing that involves as much waste – it’s worse than working in an effluent plant!

2. Keep fuelling your brain as you write. As I write this, I’m eating Baked Beetroot & Golden Linseed Tortillas which masquerade as healthy, a bit like myself, but are probably as bad as Monster Munch. While my right hand clicks on the mouse, my left dips more industriously into the tortillas. Testifying to the fact that I’ve just given birth to a new play, I need to lose a few pounds which leads seamlessly into…

3. When you’re stuck, go outside for a walk. There’s nothing like walking to give you inspiration or to reveal what rubbish you’ve just been writing. Also, it’s great to go out and see the world instead of locking yourself away like some insanely rambling Miss Havisham. I’d advise being a method writer and living the experiences you write about. Sometimes, I put more imagination into my life than my fiction.

4. Spend more time writing than promoting yourself. It’s becoming ridiculous – nowadays a writer is expected to be a teacher, a performer, a journalist, a social media influencer and a supermodel (with cheekbones to match the cutting-edge prose). I think it’s better to spend more time adorning your prose than your body as that’s what will count in the end. Once I had a meeting with a publisher who asked me if I’d thought of contact lenses. If I can’t wear glasses as a writer, who can wear glasses? It certainly didn’t do James Joyce any harm, but it is true there aren’t many female greats kitted out in specs. To riff on Dorothy Parker, “Publishers seldom make passes / At girls who wear glasses.”

5. Give ads for “writing clinics” and “script surgeries” a wide berth. Is your writing sick or something? Who are these people who run them, some sort of literary doctors? The only way I’m going to a surgery is if my hand’s broken and I can’t write any more. It’s great to have someone you can trust to read your work, but know there is no formula, no code, no rulebook and the best writing is always empirical.

6. Find yourself a muse. Artists always need a life model and writers need one too (preferably nude but clothed will do).

7. Try to have a social life. I read an article where Anne Enright’s advice to writers was: “what you have to not do is leave the house”. That’s grand for her – she has a husband and kids at home, but what am I going to do, talk to the wallpaper? Besides, you need to have a lot of friends or who’s going to turn up at your book launches and opening nights? I unfortunately differ from the traditional Irish writer in that I don’t have a huge, extended Catholic family to lasso into being my groupies. However, the big upside to not having kids is I can write freely about sex without having to watch them cringe on the sidelines.

8. Rewriting will not necessarily make something better. But it will probably make it longer. I always think of writers like Conor McPherson whose award-winning The Weir was a first draft written in 10 hours. It’s a fallacy to think slaving over something makes it better as some writing emerges perfectly formed. For me, editing means honing rather than ruthlessly cutting adjectives and adverbs like Stephen King – in fact, I totally, wildly and utterly love adverbs! A publisher once recommended that I try ProWritingAid, an editing program. My God, nearly every one of my sentences had something wrong with it! It was the most destructive thing to writing I’ve ever seen – like having a cross between an editor and a Terminator.

9. Sit on your arse. Now, I know that implies laziness, but to me it means hard work at a desk. The German word for buttock is “sitzfleisch” and the great thing about being a writer is you will develop gluteal muscles that could crack a pine cone. Other advice would include getting out of bed in the mornings and hauling yourself over to your PC. As they say, the early bird catches the word!

10. Release your own inner mythomaniac. If there is one piece of work that should showcase your creative flair, it’s your bio. Years ago, I was sick of short story rejections, so I decided to give myself a more bookish persona by claiming I worked at the Linenhall Library – funnily enough my next short story was snapped up straightaway. It’s not lying; it’s being fictional with the truth, but it can become a bit addictive. In fact, I’m such a quick writer, it only took me an hour to write this piece (though my arse flagrantly disagrees and it should know better than I do when I’m talking out of it!).