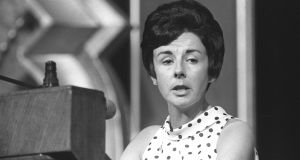 September 1968: Dubliner Joan O’Connell, addresses Britain’s Trade Union Congress in Blackpool on a motion on equal pay for equal work, which she described as “undoubtedly the oldest wage claim of the trade union movement”.

In September 1968 Joan O’Connell, a Dublin trade unionist, made an impassioned speech at Britain’s Trade Union Congress in Blackpool.

She was speaking on a motion on equal pay for equal work for women and men, which she described as “undoubtedly the oldest wage claim of the trade union movement”.

O’Connell, who represented the Draughtmen’s and Allied Technicians’ Union (DATA), then a pan UK-Ireland organisation, went on to excoriate the overwhelmingly male audience.

She pointed out that the TUC had first passed a resolution in favour of equal pay for equal work in 1888, 20 years after the founding of the congress.

“There is nothing more revolting than the annual spectacle at this Congress of women delegates going to the rostrum to beg support from the male members. It has ceased to be funny,” she told them.

Her speech came against the backdrop of the Ford dispute at Dagenham in June 1968, when women sewing machinists had staged a three-week strike in support of equal pay.

O’Connell told TUC delegates that the women at Dagenham had not begged their colleagues for a pay rise, but instead had taken direct action.

The trade union movement had a lot to be proud of, she went on to say, but not on the issue of equal pay.

“One of the less glorious chapters will be that which deals with the regrettable manner in which male members of trade unions have, by their inactivity, condemned all their female members to industrial apartheid, which permits the employers of this country to treat women workers as second-class citizens and therefore robs them of some £1,000 million a year.

The speech came to the attention of Labour MP and former cabinet minister Yvette Cooper who has now included it in a new book about inspirational speeches by women entitled She Speaks : The Power of Women’s Voices.

O’Connell’s speech is included along with ones by Boadicea, Elizabeth I, Michelle Obama, Emmeline Pankhurst and Margaret Thatcher among others. It also includes a speech by Irish disabilities campaigner Joanne O’Riordan.

In the book Cooper, who was chief secretary to the treasury and secretary of state for work and pensions between 2008 and 2010, said O’Connell’s speech was a “direct emotional and moral challenge to the men in the audience”.

It is said to have been the inspiration behind a similar speech in the film Made in Dagenham (2010) about the women involved in the Ford dispute.

Lasst September, Ms Cooper tweeted in an attempt to find O’Connell, and was pleasantly surprised to learn that she was still alive and well, living in a nursing home in Dublin.

O’Connell said that she was “absolutely delighted and more than a little surprised” to be included in the book.

“I still remember addressing the TUC conference in Blackpool in 1968. There were not many women delegates and I was quite nervous about my speech – yet the issue of equal pay for women was something I felt strongly about.

“And while there has been much improvement on that front, 50 years on, sadly the struggle for equal pay for equal work still continues.”

She Speaks: The Power of Women’s Voices by Yvette Cooper is published by Atlantic Books, priced €15