A one in a million chance: Identical triplets born in Dublin 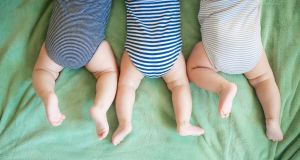 The triplet’s father David Ryan has a son Jordan (18) while their mother Annmarie Byrne-Ryan has a daughter Shauna (18) and the couple has a son Mason (2). Photograph: iStock

The Master of the Rotunda Maternity Hospital has described the birth of identical triplets on New Year’s Day as “incredibly unusual” and a one in a million occurrence.

The three baby boys who were born just before noon on Wednesday to Annmarie Byrne-Ryan and David Ryan are spontaneous triplets which means they were conceived without medical intervention.

Speaking just hours after the births, Ms Byrne-Ryan told RTÉ that the pregnancy had been unexpected.

“They’re doing well. I’ve yet to see all three together. David’s been up and down, back and forward to the NICU [neonatal intensive care unit] ward taking loads of pictures, keeping me updated. So I’m anxious myself to get down to see them.”

The couple will have ‘built-in babysitters’ at home, with David’s son Jordan and Annmarie’s daughter Shauna, both of whom are 18. Together, they also have Mason who has just turned two years.

She added that she was “just relieved they’re here, they’re healthy and all is good at the moment anyway, thank God”.

The Swords, Co Dublin native had been scheduled for delivery on January 8th, but her waters broke unexpectedly at home in the early hours of New Year’s Day.

She admitted that the pregnancy had been a surprise and it was “such a shock” when she was told she was pregnant with triplets.

“We got married at the end of April and went on honeymoon to Dubrovnik in May, and where most people come back with fridge magnets, myself and David brought home triplets.

“So we were in shock about that and we didn’t even know we were having them obviously until I had a bit of a bleed nine or ten weeks in and we came into the hospital and we found out then.

“Then it was even more of a shock to find out they were identical. We found out later down the line that they were identical – I think it was maybe three or four months. I have only one ovary myself because I had an operation and had an ovary removed in this hospital when I was 18. So they were baffled with that as well.

“We’re blessed, absolutely blessed. It’s going to be tough, but we’ve plenty of support from both families so we’ll just have to do it,” she said.

Master of the Rotunda Professor Fergal Malone told RTÉ radio’s Morning Ireland that the vast majority of triplet pregnancies are a result of fertility therapy.

“Only about 10 per cent of triplet pregnancies occur spontaneously, just naturally without any medication or intervention at all. Probably no more common than one in a million or even less. The embryo splits once into two identical twins, and then one of those splits yet again into now an identical triplet. So not only one split but two splitting to achieve identical triplets is incredibly rare.

“You would always do your best to try and deliver triplets during the day if possible, when your staffing is a little bit better than at night. So when you know that a patient is about to go into labour with triplets, or she’s going into labour, you then mobilise additional neonatal resources, additional nurses and doctors to come in.

“So everyone is on standby, jumps in, and everything is done in a calm controlled manner. But it’s because we’re so busy we have that depth available.”

Prof Malone said it was hoped the triplets would spend no more than two or three weeks in nursery before they can go home.

“The downside from the hospital’s perspective is that the hospital is now closed to external admissions from neonatal perspective for a short while until we catch up. But that’s because we’re so busy anyway. So it does add a small little extra demand on us, but we handle it.”

1 At least eight shot dead in German town of Hanau
2 ‘If all the immigrants go back, who will work in the meat factories and do the crap jobs?’
3 A Russian cruiser with ‘cannibal rats’: What other ‘ghost ships’ could be out there?
4 DUP pleads with UK to reduce salary threshold for migrant workers coming to North
5 Person claiming to represent ‘ghost ship’ owner comes forward
Real news has value SUBSCRIBE