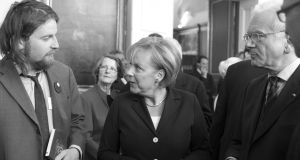 The first Buro BDP Writing Prize has been announced by Broken Dimanche Press, the Berlin-based, self-confessed European publishing house. BDP is celebrating its 10th anniversary after being established by Irish novelist John Holten and Norwegian journalist and writer Line Madsen Simenstad in their Berlin bedroom in 2009.

The prize will result in a shortlist and a winner receiving a cash prize of €1,000 plus the opportunity to publish a book with Broken Dimanche Press. It has an acclaimed judging panel, including novelist and artist Travis Jeppesen, poet, critic and editor Quinn Latimer, BDP’s own editor and curator Ida Bencke as well as Holten, BDP’s editor-in-chief. It is supported by Berlin venue, Babes Bar.

The prize is y being open to anyone in the EU and associated countries, reflecting BDP’s commitment to the belief that literature is inherently transnational and that traditional publishing is not doing enough to keep up with changes in digital and online audiences. It is also wedded to the idea that visual contemporary art is a good domain for the dissemination of literature and books, continuing the relationship between printed matter and the avant garde that harks back to the Dada and Surrealist movements.

In 2010 BDP won the Charlemagne Youth Prize for their first book You Are Here, an anthology that investigated the famous creative scene of Berlin. This even led Holten to sharing a stage with Angela Merkel and Donald Tusk. It was no surprise that the spirit and openness of Berlin led the publishing house and its very first publication to European success, according to Holten, and the city is central to the ethos of the prize, he says.

“Now more than ever we need to celebrate European culture and transnational co-operation. It’s not a coincidence that the deadline for the prize is at the same time as the EU elections. Literature, art and book making are all inherently co-operative, empathy-producing activities that foster the basis for social-democratic and progressive causes, societies and communities. We want to celebrate avant-garde and adventurous writing and art in the form of a book because such endeavours can lead to wider contributions to culture as a whole.”

Buro BDP has twice been awarded the Berlin Senat’s Award for Project Spaces in 2018 and 2016. It has published over 60 titles as well as exhibitions, readings, performances and happenings.

The competition deadline is May 31st, at 7pm. The shortlist will be announced in June. The winner will be announced at a party at Babes Bar in Berlin in July. More info: https://www.brokendimanche.eu/bro-bdp-2019

Ida Bencke is a curator and editor. She has worked with BDP since 2011 and is co-founder of the curatorial collective Laboratory for Aesthetics and Ecology. She is an external lecturer at the Royal Danish Academy of Fine Arts.

John Holten is a novelist and publisher of Broken Dimanche Press. Most recently his writing has appeared in Partisan Hotel, Frieze, Electric Literature and gorse. In 2018 an excerpt of his first novel, The Readymades, was anthologised in The Other Irish Tradition (Dalkey Archive Press) and will be republished by gorse editions in September 2019.

Travis Jeppesen is the author of the novels Victims, Wolf at the Door, and The Suiciders, as well as two volumes of poetry and a collection of art criticism, Disorientations: Art on the Margins of the “Contemporary”. In 2018, his book See You in Pyongyang, about his time living and studying in North Korea, was published. His essays and criticism have appeared in Wall Street Journal, New York Daily News, Artforum, Afterall, Art in America, Texte zur Kunstt, Flash Art, Bookforum, Spike Art Magazine, frieze, and Mousse, among other publications. He is the recipient of a 2013 Arts Writers Grant from Creative Capital / the Warhol Foundation, and has taught as a visiting lecturer in Critical Writing in Art and Design at the Royal College of Art, where he completed his PhD in 2016. His calligraphic and text-based art work has been the subject of solo exhibitions at Wilkinson Gallery (London), Exile (Berlin), and Rupert (Vilnius). Jeppesen is based in Berlin and Shanghai, where he teaches at the Institute for Cultural and Creative Industry at Shanghai Jiao Tong University. His new collection of essays, Bad Writing, is forthcoming from Sternberg Press.

Quinn Latimer is a California-born writer and editor whose work often explores feminist economies of writing, reading, and image production. She is the author of Like a Woman: Essays, Readings, Poems (Sternberg Press, 2017); Sarah Lucas: Describe This Distance (Mousse Publishing, 2013); Film as a Form of Writing: Quinn Latimer Talks to Akram Zaatari (Wiels, 2013); and Rumored Animals (Dream Horse Press, 2012). Her writings and readings have been featured widely, including at REDCAT, Los Angeles; Chisenhale Gallery, London; Radio Athe?nes, Athens; the Poetry Project, New York; the Venice Architecture Biennale; and Sharjah Biennial 13. Latimer was editor-in-chief of publications for documenta 14 in Athens and Kassel.

Babes Bar is an artist-run platform run by Adam Fearon and Caique Tizzi. Babes Bar invites artists to create works, situations and performances across a variety of contexts: from dinners to karaoke to concerts. Since 2016 Babes Bar has hosted many events at venues including Agora, BQ Gallery, Berlinische Galerie, KW Institute for Contemporary Artand Martin Gropius Bau.