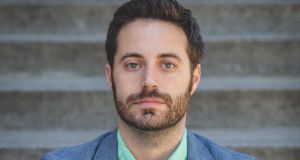 Garrad Conley: Two years on, it pains him to even recall writing the book, ‘Boy Erased: A Memoir’.

Detailing his time in Love in Action, a “gay conversion therapy organisation”, for Boy Erased: A Memoir was no easy task for Garrad Conley. Released in 2016, the book begins with a disclaimer that “trauma has made dark what was once painfully clear”, before describing his struggle with his sexuality in a Baptist household in Arkansas, being raped during college – and after he was outed by the perpetrator, the manner in which the intensive intervention tried to turn him straight.

“I hadn’t yet visited Dr Julie to check my testosterone levels for deficiencies,” he writes at the start of his involvement with Love in Action (LIA). “But I already knew after my first session that I was diseased, possibly incurable.”

Two years on, it pains him to even recall writing the book.

I went into college cranky and mad because I was in that dark world again. To keep myself sane I had to stick to a strict schedule of writing, teaching and running

“To have to reconstruct all of that . . .” he trails away as we meet in London. “I was teaching in an American college in Bulgaria at the time, and doing writing in the morning then going into work was the hardest thing in the world. I went into college cranky and mad because I was in that dark world again. And my boyfriend at the time had to put up with so much too; to keep myself sane I had to stick to a strict schedule of writing, teaching and running. It was a tough time.”

So when the book was heralded for shining a light on being a gay teenager in America’s bible belt, and director Joel Edgerton (also famed for acting in Red Sparrow and The Great Gatsby) brought it to Focus Films, not even the promise of an all-star cast like Russell Crowe, Nicole Kidman and breakthrough actor Lucas Hedges (Lady Bird, Manchester by the Sea) could tempt Conley to return to that intense state.

“I was asked to write the script but I turned it down because I didn’t need to go there again,” he says, shaking the idea away. “I also felt that dramatising my story in another medium might feel odd, especially as it would be a more fictional account. But I gave feedback on every draft of the script, and I went to visit the set a number of times. My mom, my husband and I were all extras in it. I saw the finished film last week, and it was beautiful.

“People might have a problem with it being told by a straight director, but Joel’s the one who came knocking at my door. He’s the one who completely took the time to understand the story, and it’s in really good hands.”

We meet over a drink in an upscale bar, and Conley, now 33, looks happy, vivacious and confident enough to turn heads regardless of one’s persuasion. Which is proof enough that his Love in Action “therapy” didn’t work, even without the mention of his husband in New York, or the historical fiction book he’s soon to release (only approved, fundamentalist Christian literature was allowed at LIA).

His ending is a mostly happy one, though he’s aware that his father, a missionary Baptist minister who prompted Conley to attend LIA, is left in a difficult position.

“After the book came out, I got some emails that were negative but my dad got the worst of it,” he says, with a soft southern accent. “His work involves going to a lot of churches to energise the crowd, but he’s been rejected from several churches because of me. A good friend of the family stood up in a meeting at one of the churches he used to attend and wanted him out, because I was saying all this stuff.

“They’ve faced a lot of scrutiny,” he says. “Randomly, Russell Crowe decided to visit my dad’s church for research for the film. There was no warning, he just took his private jet and his entourage, and went to the church and then talked to my dad for a few hours.

“After that the local media was all over my dad, asking him if they supported his son. That puts him in an awkward position, because yes, he supports my career but he still disagrees with me. That’s not a good place for him to be. Especially because he takes care of my mom. She has health issues and the only pay cheque they have is from the church, so I don’t want to jeopardise that.”

It’s a testament to both father and son that they maintain a relationship despite their divergent beliefs, not least as Conley has stepped up to the role of spokesperson against conversion therapy.

I almost killed myself, and a lot of people have killed themselves, and I’m going to speak out in hope that no one else does

“Some of my family don’t talk to me anymore because they think I shouldn’t share these secrets. It’s a southern thing. Like a lot of rape victims get blamed there, because they’re the ones speaking out,” he says. “They wonder why I’m telling my story and I can’t give my dad an easy life. But it’s because I almost killed myself, and a lot of people have killed themselves, and I’m going to speak out in hope that no one else does.”

Built on the principles of Alcoholics Anonymous, conversion therapy treats homosexuality like a disorder, and aims to “cure” patients inhouse or, in Conley’s case, while staying in approved hotels under lockdown (“every part of the city was forbidden except for places with the word ‘Christ’ in it, really”.)

LIA began operating in Memphis in 1994, 20 years before Conley passed through its doors. Nowadays, it operates under the guise of Restoration Path, though the therapy was discredited even before its former director, John Smid, entered a same-sex marriage.

Conversion therapy is now partially banned in Canada, Australia and 10 states of America, and fully banned in Malta, Argentina and Brazil. In Ireland, a prohibition bill passed a second reading in the Seanad in May, with cross-party support.

“Nice, liberal people are incredulous that it’s happening in 2018, but it’s everywhere.” Has he found his own terms with that too?

The Bible is a strong inspirational text; it’s where I got most of my morality from. It’s a good story

“When the ‘thought police’ told me that God didn’t love me because of who I was, that was really painful and now I can’t feel comfortable in a church.

“I still pray. The Bible is a strong inspirational text; it’s where I got most of my morality from. It’s a good story.”

It’s a good story. An innocuous comment, but one which splits him from missionary baptists, who take a literal interpretation of the Bible – including Leviticus, which says, “Thou shalt not lie with mankind, as with womankind”. But Conley believes that baptists can change their views towards the queer community.

“The Bible also says that you can’t eat shrimp, and slavery is in the Bible too. The baptists used verses to justify slavery and the Jim Crow laws. They’ve since renounced slavery, so why are they incapable of changing this?”

“The really sad part is that LGBTQ issues are ripping the church apart,” he says. “They’re not dealing with it; they’ve farmed it out to places like LIA and trust organisations like Focus on the Family, which was funded by among others Mike Pence, our vice-president, who also supported conversion therapy.

“But their congregation deal with LGBTQ issues away from church every day, because more people are open about it. Now other denominations like the Episcopal Church and the Unitarians are swooping in and accepting people as they are, so people are flocking to them.”

Even Pope Francis seems to have softened his stance towards the LGBT community.

“And you know when the dinosaurs are saying it, you’re doing pretty well,” grins Conley.

The film, he hopes, will continue adding pressure for reform when it’s released in September.

“Regardless of how it does, it’s a huge platform to talk about the issues I’ve been trying to highlight,” he says. “It’s a cliché to say it, but even if it helps one person, it will all be worth it.”