Calypso by David Sedaris: grief, humour and an unromantic proposal

There is more sorrow in this collection of essays than in his previous works, as it deals with the aftermath of his sister’s suicide, but plenty of witty observations too 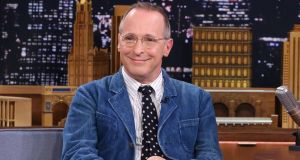 I have a theory that writers are a bit like lovers. Some are fun for a one-book stand but, the next morning, you want them out of the house as quickly as possible. Some you allow to stick around for a couple more, but you know you’re only killing time until a better writer comes along. And some you recognise instantly as a keeper; you’re in it for the long run and hope they’ll treat you well, never cheat on you or run off with all your money. Since I first encountered David Sedaris’s work about 20 years ago, he’s basically moved in with me, been given his own shelves and drawers, has a toothbrush in the en suite, and we’ve built a very nice life together.

Much of the action in his latest collection of essays takes place in his beach house on the north Carolina coast, rather hilariously called the Sea Section. The house is divided into two, one half for him and his long-suffering but stoical partner Hugh, the other for his siblings and father, and it’s there that they gather to tell stories about their shared childhood. However, there’s more sorrow in this book than in previous ones for each is dealing with the grief brought on by the suicide of the youngest Sedaris child, Tiffany, in 2013.

Tiffany’s presence lingers over the pages. In her will, she decreed “that we, her family, could not have her body or attend her memorial service,” and Sedaris follows up with, “so put that in your pipe and smoke it, our mother would have said”. However, towards the end of the book, when he recounts the last time he saw her, he reveals a moment of the most shocking cruelty that seems entirely contradictory to his good nature and one can’t help but wonder what terrible things passed between them.

Sedaris lives an eventful life and, because he’s observant and seems to enjoy talking to strangers, his every day is filled with curious moments. On a book tour around the US, for example, he mentions to an audience that he’s discovered a small tumour beneath his ribcage and, later, at the book-signing, a woman offers to cut it out of him. Bizarrely, he takes her up on this, following her home where she anaesthetises him, slices into his body and eventually presents the tumour to him in a bag, which he then freezes to feed to a snapping turtle near his beach house. I’ve been on plenty of book tours in my life and the most I’m ever offered afterwards is a beer and a lift back to the hotel; a stranger wielding a scalpel might actually liven things up a little.

An unexpectedly moving essay is A Modest Proposal, in which Sedaris learns that the US supreme court has legalised same-sex marriage, although he thinks it’s a mixed blessing since “from the dawn of time, the one irrefutably good thing about gay men and lesbians was that we didn’t force people to sit through our weddings”. Spurred on, not by romance but by the tax benefits, he makes the most unromantic proposal of all-time to Hugh, who sensibly rejects his offer.

Sedaris, who lives in England, is particularly good on dissecting the US from a distance, but whenever he returns he finds himself irritated by American habits. Checking into a hotel and being asked how his journey was, he informs a desk clerk that he was originally going to fly, “but then this tiger offered to carry me very gently in her mouth. I said OK, but you know what? She wasn’t gentle at all. One of her teeth pierced my small intestine”. The clerk gives a response that could only come from an American: “Awesome!”

Also, published this month, in paperback, is Sedaris’ first collection of diaries, Theft by Finding, covering the years 1977-2002. While entertaining, it lacks some of the punch of his essays, perhaps because, at almost 600 pages, it’s too long and many of the entries are a little mundane. He spends an awful lot of time at the International House of Pancakes, detailing what he ate and drank, and while that eventually grows tiring, at least his days are enlivened by the people who torment or intrigue him there.

Sedaris is a great American humorist but his observational humour contains subtle details that would make most novelists envious. And if all that isn’t enough to tempt you, can you really resist a book with an essay titled And While You’re Up There, Check on my Prostate?

John Boyne’s new novel, A Ladder to the Sky, will be published in August (Doubleday)