Jonathan Coe: ‘All my influences were pushing me towards film and television’

The novelist on his new book, being an unromantic outsider and Billy Wilder 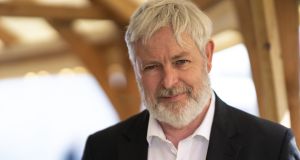 It has never been that easy to place Jonathan Coe. An agreeable, softly-spoken fellow from the English West Midlands, the author first attracted attention with his extraordinary 1994 novel What a Carve Up!. Working a critique of Thatcherite politics in with a rejigging of the 1961 British comedy film that gives the book its title, the sprawling comedy was a bit postmodern, but not in an intimidating David Foster Wallace sense.

The Rotters’ Club, another hit, was a little more conventional. Now he has written the delightful Mr Wilder and Me, in which a middle-aged woman recalls her meeting with director Billy Wilder some decades earlier. Coe is really not like anyone else.

“I feel like I am working in a tradition, but not in a literary tradition,” he says. “I felt that I was working in the English style of comedy that began with Beyond the Fringe, Monty Python, Reginald Perrin. My works were humorous, self-referential entertainment. There wasn’t really a contemporary literary example. I watched far more television than I read of the Times Literary Supplement in the 1970s. The anomaly is that I became a novelist. All my influences – including Billy Wilder – were pushing me towards film and television.”

He will admit Flann O’Brien into the comic fold. “Oh, At Swim-Two-Birds was a massive influence on What a Carve Up!,” he says.

Mr Wilder and Me has many funny passages, but you wouldn’t exactly call it a comic novel. The protagonist, Calista, now a composer in London, thinks back to a meeting with Wilder, director of Some Like It Hot, Sunset Boulevard and a dozen other classics, that led to her securing a job as translator on his penultimate 1978 satire Fedora. She observes the relationship between Wilder and his regular screenwriter IAL Diamond. She gets a feeling for changing times. She learns how to become an adult.

“A few days ago on Goodreads someone wrote they’d never heard of Billy Wilder,” he says with a tolerant sigh. “And they were halfway through the book before they realised he was a real director, a real person. That pulled me up for a moment. But in the end it was a very nice review. And I thought: Well, that’s fantastic. That is the audience I want to be enjoying it – that and others.”

“I don’t want to come across as a boring old fart about this,” he says. “I am quite resigned to it. My daughters are 19 and 23. As they were growing up I did my best to introduce them to classic cinema. Some of the films I showed them struck a chord and worked. With some of them it was like trying to get them to read Latin. But that informed the book. For them, film history starts at about the time the book is set. Somewhere between Jaws and ET is where cinema started for them. That is partly to do with accessibility.”

He muses on how, though it is now much easier to access old cinema than it was when he was a boy, there are fewer people pushing you in that direction. “I discovered these films through television – and through having a very limited choice of what to watch.”

There is much in Mr Wilder and Me about the different ways we access information then and now. Calista hasn’t heard of Billy Wilder when she first meets him. Her only sources of information are the famously reactionary (even then) film Guides and Companions of Leslie Halliwell. That was our IMDb. There was nowhere else to go for a comprehensive wad of facts on cinema through the decades. Generations grew up puzzled by Halliwell’s distaste for virtually every film made after the decline of the studio system.

“For our generation, he was kind of quite an important figure,” Coe says. “He’s not talked about very much anymore. In the same way that there were only three TV channels there were only two movie guides: Leonard Maltin and Leslie Halliwell. And Halliwell had such an idiosyncratic take on movie history. As you say, no good films after 1967 – and not many good films after 1947. Like Calista, I memorised those books.”

Coe was born in 1961 to impeccably middle-class parents: dad was a research scientist in the car industry; mum was a PE and music teacher. He went to a direct-grant school and then on to Trinity College Cambridge. Fans of Coe’s work will feel that they already have a grasp on his personality from the character of Benjamin Trotter in The Rotters’ Club. That 2001 novel follows a group of Birmingham teenagers as they wrestle with issues of the day and the timeless trials of frustrated young adulthood.

“Yeah. I don’t think I will ever write a memoir because I’ve pretty much done the story of my life through Benjamin Trotter and his friends. I think if you’ve read that book you understand my childhood, my background completely.”

The book rubs up against one of Coe’s perennial obsessions. There is nobody so keen to discuss the progressive rock stylings of such 1970s bands as Soft Machine, Caravan and Henry Cow. The Rotters’ Club shares its title with the best known album by those giants of the “Canterbury Scene” (we don’t have space to flesh this out), Hatfield and the North. The music was never exactly fashionable. No punk rocker was, by 1978, quite so much of an outsider as the average Gentle Giant fan.

Minutes before we talk I notice him having a Twitter conversation about “time signatures” on 1970s albums. You rarely get that from fans of The Ruts.

“Bang to rights!” he says, laughing. “I was in such a bubble of my own tastes and obsessions – in terms of music and film and books – that I really was outside fashion. I hadn’t noticed people had stopped listening to Caravan seven or eight years ago. That was a sign of my self-absorption. I was the only person still doing it.

“What amazes me really about my adolescence, looking back at it, was what a bubble I grew up in. I liked prog rock and not even the popular bits of prog rock – I liked what John Peel called the crusty bits round the edges. If there was a way of being an outsider that was totally unromantic, I was that.”

The Rotters Club reminds us what an impact the Birmingham pub bombings had on the citizens of that city. So much of the conversation has, subsequently, focused on the miscarriage of justice that we sometimes forget that 21 people died and 182 were injured. Coe would have been 13 when the bombs went off in 1974.

“Unlike Benjamin, I didn’t know anyone who was directly impacted by the bombings,” he says. “But you know, in terms of the air that you breathed in Birmingham during the second half of the 1970s, it was inescapable. And it rippled out. As I show in the novel – although I didn’t really appreciate it at the time – it led to a lot of very strong anti-Irish feeling and anti-Irish violence in workplaces. It would be impossible to write a novel set in that era without having that as a central event.”

Coe arrived in London long after the angry young men had supposedly transformed the literary salons. Yet it still feels as if that world is run by a certain stripe of southern elite. He has already referred to himself as an unromantic outsider. Does that description cover his experiences as a writer as well?

“I think I did still feel it a little bit when I arrived ‘on the scene’ as it were,” he says. “It was the 1980s and I ran into a lot of writers and editors and publishers – mainly a little bit older than me – who, when I got to talk to them, turned out to have all grown up in north London. A lot of their parents were often writers or artists or had worked in publishing. They had these amazing book-lined rooms. My parents read, but they would read Rich Man Poor Man, or the new Agatha Christie.”

Coe showed them. Not only did he win awards, but his very English novels became hits in translation. They love this distillation of Reggie Perrin, Monty Python and Beyond the Fringe on the Continent. That’s how to become an unromantic outsider.

“My French and Italian readers have stayed really loyal to me over the last 25 years, and I couldn’t have done it without them.”

That’s his Oscar acceptance speech sorted. Billy Wilder could not have done better.

Mr Wilder and Me is published on November 5th