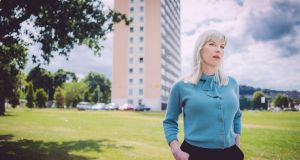 Michael Amherst has won the 2020 Hubert Butler Essay Prize for his essay on the subject of Communal solidarity and individual freedom: antagonists or allies? The international prize, which encourages the art of essay-writing across Europe, was announced by President Michael D Higgins.

Foster, chair of the judging panel said, “In the end we were unanimous in awarding the first prize to Michael Amherst for his incisive essay focussing on identity politics, and how they operate when several kinds of ‘identity’ clash... Amherst elegantly makes the case that an assertion of individual rights and ‘freedom’ necessarily involves engagement with the public realm.”

Amherst is the author of Go the Way Your Blood Beats, a meditation on truth and desire, for which he won the 2019 Stonewall Israel Fishman Award for Nonfiction.

“It was a devilish task to pick a winner from such a brilliant short list,” Kevin Barry, chair of the judges, said, “but Wendy Erskine’s Sweet Home is such an original debut, and it has such a perfectly unified aesthetic, that it’s a more than worthy winner.”

The other judges were Eibhear Walshe, Helen Meany and Catherine Marshall.

The Butler Literary Award was initiated in 1962 by Patrick and Aimee Butler of St Paul, Minnesota and continued until 2002. In 2018 The Irish American Cultural Institute revived the award and changed its focus to emerging literary writers in Ireland. It is offered every two years.

Shadowplay by Joseph O’Connor is this weekend’s Irish Times Eason book offer. You can buy the Costa-shortlisted Irish Novel of the Year about Bram Stoker’s life in London’s theatre world for just €4.99, a saving of €6, when you purchase the paper at any Eason store. It has also been selected by the Richard & Judy Book Club as one of their auumn reads. Their early support for O’Connor’s superb historical epic Star of the Sea gave his career a significant and well-deserved boost. Read our review of Shadowplay here; our interview with the author here; listen to our podcast; and read Joe’s account of Stoker and Dracula here.

Tomorrow’s books pages feature a new short story by Roddy Doyle; an interview with Martina Cox by Jennifer O’Connell about her memloir, With Hope In Your Heart: The Seán Cox Story; an interview with jockey Barry Geraghty by Keith Duggan about his auhobiography; and Anthony Clare’s thought son Jimmy Savile, extracted from anew biography of the celebrated psychiatrist.

Reviews include Anthony Roche on Tom Stoppard: A Life by Hermione Lee; Sarah Moss on That Old Country Music by Kevin Barry; Gareth Farrelly on Champagne Football by Mark Tighe and Paul Rowan; Kerri Ní Dochartaigh on A Life on Our Planet: My Witness Statement and Vision for the Future by David Attenborough; Estelle Birdy on Feminism Backwards by Rosita Sweetman and A Guarded Life: My story of the dark side of An Garda Síochána by Majella Moynihan; Niamh Donnelly on Inside Story by Martin Amis; Sarah Gilmartin on The Perfect World of Miwako Sumida by Clarissa Goenawan; and Claire Hennessy on the best new YA fiction.

Forget the pram in the hall, Cyril Connolly’s supposed sombre enemy of good art; welcome to the laptop in the materinity unit. Irish author Fiona Sherlock, from Bective, Co Meath, wrote her new book, Twelve Motives for Murder, in eight weeks after giving birth to her baby Arthur. She even began writing it in the Rotunda, the Dublin maternity hospital. She has a two-book deal with Hodder Studio (a new imprint at Hodder and Stoughton). and it launches in December. It is the second book deal she has signed in 2020, having signed a three-book deal with Poolbeg at the start of the year.

Twelve Motives for Murder is an homage to the classic crime murder mystery told entirely through interviews between the detective and each of the 12 suspects in turn. Readers and listeners must piece together the crime and work out ‘whodunit’ alongside the detective. The audiobook will be a multi-cast production. Her next title, Preserved, will be published by Poolbeg in March.

Michelle Gallen’s acclaimed novel, Big Girl Small Town, is to be adapted by Lookout Point,  the award-winning company owned by BBC Studios, its  newly appointed creative director, comedy  Pippa Brown confirmed today.   The renowned writer, director and former actor Kathy Burke, a huge fan of the book, will join as part of the creative team working on the adaptation.

Shortlisted for an  Irish Book Award and the Comedy Women in Print Prize, and dubbed “Milkman meets Derry Girls” the comic novel set in 2004 explores the legacy of the Troubles in a divided Irish border town through the perspective of Majella O’Neill, a 27-year-old “big girl” who lives at home with her mother and is brimming with no-nonsense attitude and scathing wit. Majella lives her life on repeat, working six days a week every week in her local chip shop and bearing witness to the darkly hilarious goings on of the town from behind the counter.

Gallen said: “It’s a dream come true to work with the legendary Kathy Burke and creative firecracker Pippa Brown to bring Majella and the town of Aghybogey to the screen. Kathy and Pippa revel in the fun, filth and grit powering the lives of characters like Jimmy Nine Pints but treat every character with dignity and respect. I think that’s going to create something very special”.

Burke said: “After hearing Jane Garvey rave about the book on Woman’s Hour I immediately bought it and had it read within a couple of days. Majella is an absolutely wonderful character, I loved being inside her beautifully unique head and I’m incredibly excited to be working alongside Michelle Gallen and Pippa Brown in getting her to the small screen”.