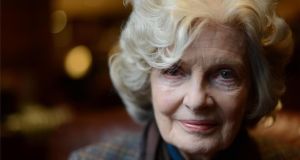 Julia O’Faolain in Dublin in 2013 for the launch of her memoir, Trespassers. Photographer: Dara Mac Dónaill

President Higgins said: “The news of the death of Julia O’Faolain will have been received with sadness by her many readers who appreciated the excellence she brought to her writing.

"Julia O’Faolain leaves behind not only a legacy of outstanding writing. She is rightly celebrated as a writer who explored and shone a light on the role of women in society and who did so with a radical realism.

"From a celebrated Irish literary family, Julia O’Faolain’s insightful and eloquent memoir, Trespassers, recounted her life growing up as the daughter of Seán O’Faoláin and Eileen Gould and is seen by many as one of the greatest memoirs by any Irish writer. Sabina and I send our deepest sympathies to her family, friends and all those who read and enjoyed her writing.”

She was born in London in 1932 where her father was teaching at Strawberry Hill College in London, but the family moved back to Ireland in 1933.

O’Faolain was educated at UCD, the University of Rome and the Sorbonne. She has worked as a writer, language teacher, editor and translator and has lived in France, Italy, the United States and in Britain.

In 2013 she published her bestselling memoir Trespassers, an account full of literary luminaries from her parents’ circle such as Elizabeth Bowen, Frank O’Connor, Brendan Behan and Patrick Kavanagh.

Asked in an Irish Times interview by Arminta Wallace whether she felt aggrieved that her name did not often figure in lists of famous Irish writers, perhaps because she did not live here, she said with a smile: “Not only do I not live here, but when my last book came out someone wrote an article naming me as ‘a forgotten writer’. Which was not a cheerful read. It wasn’t in any way offensive, but it wasn’t very comforting. I suppose I didn’t write enough. You mustn’t let too many years go by between books – and I did that. A lot.”

She is survived by her husband, the American historian Lauro Martines who is a world authority of the Italian Renaissance and the couple’s son Lucien. With her husband, O’Faolain edited Not in God’s Image: Women in History from the Greeks to the Victorians (1973).

Prof Martines deposited her papers in the UCD Archives in 2018, where they are  being catalogued. Principal archivist, Kate Manning, said that the papers include a significant correspondence between O’Faolain and her father.

“O’Faolain writes about women’s roles in society, power, faith and sexuality, and about Irish dilemmas of female identity,” Christopher Fowler wrote in a profile for the London Independent. “I like fiction to be a Trojan horse,” the author herself said. “It can seem to be engineering an escape from alien realities, but its true aim is to slip inside them and get their measure.”

Her friend Marguerite MacCurtain described her as an “adorable woman – beautiful in every way” and an “extraordinarily loyal and good friend”.

“She was the kind of friend one would hope to have in passing through this world.”