‘The zip on a body bag. It’s not like any zip she’s heard before’ 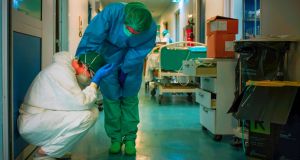 She sits at the table. She feels the back of the chair behind her. She needs it there. It’s holding her up. She’s afraid to sit back on the couch, to luxuriate, to let go. She’s afraid to close her eyes.

She’s starving but food would make her sick. Anything – it doesn’t matter what – would feel uncooked and wrong in her mouth. It would choke her.

She’ll have to eat. She knows that. She will.

She wants to phone her mother. But she won’t – not yet. She isn’t ready. If her mam asks her how she is she won’t be able to answer. She won’t say what she wants to say. She won’t say anything that she feels belongs to her. She’ll be out of control, not herself.

It’s dark outside now. It wasn’t when she sat. Although she doesn’t think she’s been sitting here for long. She can hear the usual noises. The children next door, on the stairs. It must be bedtime. Bedtime and early morning – that’s when she hears them. She doesn’t think they’re speaking English. Shouting English. Screaming English. The fridge is ticking. There’s a house alarm whining down the road. The noise has been there since she sat down.

She shares this place but it’s empty, wiped clean, wiped lifeless. She’d love to see a mug. A bit of a mess. The other girls are gone, home. She’s the only one who had to stay. Her phone is alive with alerts but she doesn’t look at them. Looking would make her feel more isolated. And confused.

This is our Vietnam.

– What gobshite said that? her father asked her when she told him – last week, she thinks it was.

– Another girl, she told him.

– Well, if she wants to pretend she’s fighting the Viet Cong, let her. Tell her to watch Platoon.

She’d laughed. Her dad loves all the war films.

– Unless she thinks she’s in the Viet Cong, does she?

– Are you in your full metal jacket? he’d asked.

It’s what he calls the PPE. All of his jokes come from war films.

Her face hurts, from the mask. It feels as if a branch sprang back and smacked her face. She’s sure there are red marks across her cheeks. She won’t look yet. Behind her ears is sore too.

The zip on a body bag. It’s not like any zip she’s heard before. It was her first time hearing one, today, and watching the zip close over the chest, the face. Joe. He had to go into two bags – that’s the procedure. They washed him. And they spoke to him. They told him what they were doing, even though he was dead. She said nothing at first, then she copied Áine, the senior staff nurse. We’re turning you onto your side now, Joe. It was easier when you talked to him. No one spoke when Áine closed the first body bag. The rasp of the zip, like it was being pulled through wood – it’s the last thing she’ll hear when she closes her eyes. When she goes to bed.

She held the tablet close to Joe’s face, so his wife could see him. Three hours before he died. She phoned her up and told her, two minutes after he died. You’re great, his wife said. You’re all great. She’d gone down to reception to collect a picture – a framed photograph of Joe with his wife and five children – that one of his sons had left there, to go into the sealed coffin with Joe. They won’t be able to see him again. Four sons and a daughter. All adults. The daughter was gorgeous in the photo. Lucy. Joe told her the name. A week ago. She’d listened to Joe talking to his wife. Only a week. I’m alive, it’s great. Each word was separate, a different effort. “Great” took ages to come out of his mouth. But his face – he meant it. Lucy was pregnant. I’m the happiest man in the world.

She’ll stand, in a minute. She’ll go upstairs. She’ll have a shower. She’ll bring her clothes downstairs, put them in the washing machine. She’ll look in the fridge, she’ll eat something. She’ll go inside and turn on the telly; she’ll keep the sound down. She’ll check her phone, make sure the alarm is ready for the morning. Then she’ll phone her mam and dad. Her dad first. He’ll make her laugh, and she’ll cry. He’ll listen and he’ll tell her that he loves her.