Johnny Rogan obituary: One of the most well-regarded music biographers of his generation 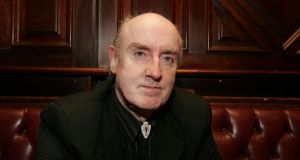 Music biographer Johnny Rogan nourished his love of pop and rock on visits to relations in Ireland through the years. Photograph: Alan Betson/The Irish Times

Johnny Rogan, who has died unexpectedly aged 67, was among the most prolific and well-regarded music biographers of his generation. He was much admired for his attention to detail and tenacity in pursuing facts, but his work did not always sit well with his subjects, so he cultivated an air of secrecy about his activities and whereabouts. Once his confidence had been gained, however, he was the most affable of companions, witty and wise, the perfect drinking buddy.

Two of his 26 books were particularly notable. His definitive biography of the Byrds ran to four updated, revised editions. First published in 1981 as Timeless Flight and in 2011 as Requiem for the Timeless, it had grown by then from the original 192 pages into a 1,200-page epic. A second volume, in 2017 his last published book, added a further 1,248 pages to the work and told the stories of the six former members of the group who had died. Q magazine described it as “the best biography of a group ever written”, while Record Collector magazine compared its scope to Tolstoy’s War and Peace.

Shorter but equally well regarded was Morrissey & Marr: The Severed Alliance (1992), the first substantial book about the Smiths, which became a bestseller, at least by rock book standards. It earned the displeasure of Morrissey who described it as “all lies” and commented: “I hope Johnny Rogan ends his days very soon in an M3 pile-up or a hotel fire,” a quote the publishers gleefully included on the cover of future editions.

Rogan had the last laugh, however, when Morrissey himself quoted from the book during the 1996 court case brought by Mike Joyce, the group’s drummer, to increase his share of the Smiths’ earnings. Rogan was present at the hearing – he attended every music-related court case he could – and was much amused when the judge described Morrissey as “devious, truculent and unreliable”. A New Statesman review of the most recent revised edition, published in 2012, described it as “the definitive if daunting account of the most romantically mythic band of those times”.

Rogan endured an austere childhood. His parents had emigrated from Co Waterford, Ireland, in 1943 and Johnny was born in London, where he was raised in deprived circumstances in Pimlico. His father died young of a heart attack, a brother drowned and his sister died of a brain haemorrhage. To a certain extent this impoverished childhood was described in his introduction to Requiem for the Timeless: “I dreamed not only of the Beatles and Bob Dylan but of the wonders of electricity,” he wrote. “Our rooms were entirely lit by gaslight, just like you see in Victorian melodramas ... heating came from burned wooden fruit crates taken from the greengrocers and chopped up with a hatchet. Removing ashes from the grate and emptying the urine-filled chamber pot were the first tasks of the day. There was no private toilet or bathroom.”

Johnny Rogan was not averse to publicity, but provided publishers with soft focus pictures of himself for use on the inside flaps of his books.

An outsider by nature, he did not receive promotional records from record companies or free tickets for concerts

Rogan attended St Vincent’s Catholic primary school and Pimlico school before spending the entire 1970s as a student, first at Newcastle University, where he studied English, and later at Acadia University in Nova Scotia. There he was awarded a master’s with a dissertation on Edmund Spenser’s The Faerie Queene. Postgraduate study at Lady Margaret Hall, Oxford, followed, before he opted to turn his scholarship towards popular music.

He nourished his love of pop and rock on visits to relations in Ireland whose house had electricity. His love of the Byrds developed on hearing their electrified reading of Dylan’s Mr Tambourine Man in 1965. “It was almost as powerful as hearing Heartbreak Hotel when I was about four years old – a treasured childhood memory,” he would write.

Most music biographers of his era served an apprenticeship on the UK’s weekly music press before turning to books but, aside from Dark Star, the Grateful Dead fanzine, Rogan rarely wrote for the music papers. After the Byrds he wrote books on Neil Young, Roxy Music, Van Morrison, The Kinks, Wham!, Crosby, Stills, Nash & Young, John Lennon and Ray Davies.

In almost every case he revisited and thoroughly revised his books some years later, often more than once, so much so that they doubled in size. He also wrote a book on football management, The Football Managers (1989), and a study of pop management, Starmakers and Svengalis: The History of British Pop Management (1988), which was adapted for a six-week BBC TV series and is now a university set text.

His second Van Morrison biography, No Surrender (2006), was included in the Sunday Times Top 10 books of the year, and inspired one reviewer to proclaim: “Van Morrison: No Surrender is the best book about popular culture written about any Irishman living or dead, and it’s certainly the best social history of Belfast in the mid-60s ever written.”

Unusually, Rogan believed that being a biographer was a lifetime commitment, which explains why – unlike the vast majority of music biographers – he rewrote and expanded his books as often as he did. “Most biographers, when they’ve finished, they leave it behind and move on,” he told Kevin Courtney of the Irish Times in 2012. “I keep boxes of material at home, and they keep getting filled up with stuff.”

Similarly, Rogan took a hands-on approach to his books, reading and correcting proofs, indexing them and following the process through from print to publication. This led to his forming his own publishing company, Rogan House, through which some of his work, including the last two editions of Requiem for the Timeless, were published. He became adept at reading the small print in book contracts, knowledge which he was happy to share with other, less savvy, authors.

Between books Rogan worked occasionally as a freelance editor and indexer, and he contributed to many collections, most notably The Encyclopedia of Popular Music, edited by Colin Larkin and published most recently in 2006 as a 10-volume edition by Oxford University Press. He also contributed book reviews to the Irish Times.

Rogan divided his time between a flat in Pimlico and a home he shared with his long-term partner, Jackie Taylor, in Tramore, Co Waterford. To those who did not know him, he might have appeared as a somewhat remote, perhaps even eccentric figure. Realising that a certain amount of promotion would help sell his books, he was not averse to publicity, but nevertheless provided publishers with soft focus pictures of himself for use on the inside flaps of his books. He grew bushy beards and almost always wore sunglasses. He let it be known that while working on The Severed Alliance, he spent a year in complete isolation, never once speaking to another person.

When he gave his telephone number to me, as his editor, I was under strict instructions never to reveal it to anyone else and in all the 41 years that I knew him I did not know his address in Pimlico, let alone visit the flat. He used a PO number for mail. Phone calls, however, could last an hour or more.

He walked almost everywhere, from Pimlico to the West End for meetings with publishers and back. An outsider by nature, he did not receive promotional records from record companies or free tickets for concerts. This, he believed, was the only way to pursue his craft with his integrity intact.