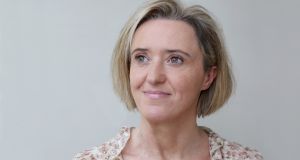 Liz Nugent: “Thank you so much, UCD L&H for such an honour. Imagine, James Joyce and me, hanging out.”

Liz Nugent has been honoured by UCD’s Literary and Historical Society with the 2021 James Joyce award in recognition of her literary accomplishments. Previous recipients include writers Seamus Heaney, Roddy Doyle, JK Rowling and Salman Rushdie.

“Thank you so much, UCD L&H for such an honour,” the author said. “Imagine, James Joyce and me, hanging out. The only thing we have in common is a love of Gorgonzola. Oh, and a walking stick, though I think his was for fashionable reasons.”

Nugent’s bestselling and awardwinning novels are Unravelling Oliver, Lying in Wait , Skin Deep and Our Little Cruelties, She has also written for television and radio.

“Never in my life has imposter syndrome felt quite so strong, because I never attended university and I don’t have a degree in English, or anything else for that matter. When a friend sent me a photo of my first book in UCC Library, I whooped for joy, because that was my first time to be in a university library and I felt very pleased and proud.

“The fact that I did not attend university was due to two factors. Firstly, I was a terrible student and a troubled adolescent and secondly, because of a physical disability which meant that almost as soon as I learned to write, a catastrophic brain haemmorhage affected my right-hand side. After years of painful physiotherapy, I had to abandon all attempts to use my right hand to write and gradually learn to use my left hand. My handwriting was consequently very slow, so I never finished an exam paper.

“I did not, however, lose my ability to read and my passion for reading saw me through many ups and downs over the following years. In order to be a writer, one must first be a reader. I read everything I could get my hands on, working through my own books and then graduating to my parents’ bookshelves (my one and only graduation!).”

In Saturday’s Irish Times, Neil Jordan talks to Donald Clarke about his new novel, The Ballad of Lord Edward and Citizen Small; Conor O’Callaghan tells me about his new novel, We Are Not in the World; and Seán Hewitt reappraises JM Synge, subject of his new academic work, JM Synge: Nature, Politics, Modernism.

Reviews are Kevin O’Sullivan on How to Avoid a Climate Disaster by Bill Gates and Lawrence Krauss’s The Physics of Climate Change; John Self on Hurdy Gurdy by Christopher Wilson; Diarmaid Ferriter on Parnell and His Times edited by Joep Leerssen; Laura Kennedy on On Getting Off: Sex and Philosophy by Damon Young; Martina Evans On Two-Way Mirror: The Life of Elizabeth Barrett Browning by Fiona Sampson; Mia Levitin on Patricia Lockwood’s No One Is Talking About This; Sarah Gilmartin on The Panic Years by Nell Frizzell; and Seán Hewitt on new poetry collections by GC Waldrep, Chris Murray and the late Derek Mahon.

Jessica Au has been awarded the 2020 Novel Prize for Cold Enough for Snow, a new, biennial award for a book-length work of literary fiction written in English by published and unpublished writers around the world. It offers $10,000 to the winner and simultaneous publication by the London-based Fitzcarraldo Editions, by Sydney publisher Giramondo and New York’s New Directions. The prize rewards novels which explore and expand the possibilities of the form, and are innovative and imaginative in style. Cold Enough for Snow, the inaugural winner, was selected from close to 1500 submissions, and will be published in early 2022.

A daughter and a mother travel to Tokyo in autumn where they talk: of the weather, of horoscopes, of clothes and objects, of family, distance and memory. But who is really speaking here, and what is the real reason behind this elliptical journey? Cold Enough for Snow is at once a careful reckoning and an elegy, one that questions whether any of us speak a common language, and what right we have to truly know another’s inner world.

Au is based in Melbourne. Her first novel Cargo (2011) was published by Picador. Cold Enough for Snow is her second novel.

The new issue of BND Magazine comes out at the end of February. This special edition provides a retrospective on 2020 and the effects Covid 19 has had on the spoken word community in Ireland.

The magazine is €6 and available to buy from boundlessandbare.com.

A Ghost in the Throat by Doireann Ní Ghríofa (Tramp Press) has been longlisted for this year’s Republic of Consciousness Prize for Small Presses.

The list features 10 books from 10 small presses in Britain and Ireland. For the first time, all the longlisted presses will receive funding from the prize, with each publisher receiving £1,000. A further £10,000 will be split between the shortlisted books, to be announced in late March. The prize is funded by the Publishing Project at the University of East Anglia, the Granta Trust and money raised through the Small Press Book of the Month subscription service.

Alex Pheby took the prize in 2019 for Lucia, also published by Galley Beggar.

Between the Red Lines, a spin-off from the Red Line Book Festival, has producd a new free programme of Irish book events to run from February 22nd to 28th to coincide with the Ireland Reads campaign, a new national day to celebrate reading on February 25th.

Talking Translations is a podcast series which brings Irish writers and translators together to share their stories and voices. Each episode features an Irish writer reading their own work aloud, followed by a translator reading a newly commissioned translation of the same piece. The texts of the original work and of the translation are published on the Literature Ireland website and provide an opportunity for publishers abroad to consider the work for future publication.

“At a time when writers cannot travel, Literature Ireland’s Talking Translations podcasts aim to bring the best of Irish writing to greater attention internationally. In this way new, deeper connections can be built between Irish writers and their translators and between the work and key foreign publishers and festival directors. Talking Translations podcasts are also simply for anyone around the world who enjoys listening to good literature” said Sinéad Mac Aodha, Director of Literature Ireland.

You can listen to the Talking Translations podcasts and read the texts at literatureireland.com or on the usual podcast discovery platforms.