John Connolly’s literary teeth are sharp as ever 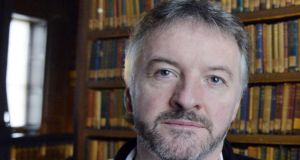 John Connolly is at his very best here: angry, polemical and compassionate. The Wolf in Winter is a brilliant performance. Photograph: Alan Betson

Book Title:
The Wolf in Winter

Discussing the challenges of maintaining interest in a long-running fictional detective, Dennis Lehane recently asked, “Have you ever heard anyone say, ‘The 17th was my favourite’?” It’s a smart line that captures a reader’s keen disappointment when a series deteriorates. Knowing when to send a character over the Reichenbach Falls is an art in itself – as is knowing when to bring him back. But for every Spenser or Scarpetta who becomes a trial on our patience there’s a Harry Bosch or Dave Robicheaux, whose 16th outing, The Tin Roof Blowdown , was certainly one of James Lee Burke’s finest.

The Wolf in Winter is the 12th in John Connolly’s superb Maine-based series featuring the private detective Charlie Parker, and, as it more than preserves the high standards his readers expect, it’s worth wondering why Connolly’s extraordinary powers of invention show no sign of flagging.

Perhaps because Connolly is not really writing conventional PI fiction, he has never seemed confined or frustrated by the restrictions of the subgenre. The Parker books might best be described as metaphysical westerns, with Parker, assisted by his lethal sidekicks, Angel and Louis, ranging across Maine like a band of avenging gunslingers. Each book ends with one case closed and a set of mysteries remaining; everything has been solved, but nothing is resolved; the malign world remains quick with angels and demons, an arcane cosmology that has its own pervasive logic, played out by degrees across the series.

On one level Connolly is simply reconnecting with the western roots of the genre: the first hard-boiled novel, Dashiell Hammett’s Red Harvest , was effectively a western, and the private investigator has always existed to counter corrupt lawmen in the pay of the rich and powerful. Parker is invariably mythologised as “The Detective” now, as close to Clint Eastwood’s “Man with No Name” as to Sam Spade.

And the books are such strange and eclectic productions, so diverse in their concerns and obsessions, seamed with philosophical and spiritual conceits, historical ideas, political and social comment and an acute sense of the natural world, all melded together with a galvanising energy that is prodigious and exhilarating. The interesting thing about a writer with a unique voice and a sustained audience is that, in the beginning, we compare him with other writers; eventually, he seems to write like no one other than himself, certainly no other crime writer; over the course of the books and the years he teaches us how to read him. He becomes his own genre.

A Wolf in Winter (and, yes, there is a wolf) centres around a homeless man, the dapper, educated Jude, who has been searching for his lost daughter, Annie Broyer, in the secretive, enclosed town of Prosperous. When Jude is found hanged, Parker discovers that he had been calling in debts so that he could hire the detective to help him in his search.

We already know Broyer is buried in a shallow grave, murdered by the board of elderly “Selectmen” who run Prosperous, and that another girl is needed to satisfy the mysterious someone or something that presides over the town.

That something came over from the northeast of England with the Familists, a 16th-century religious sect, and their church, which they transported brick by brick . The modern-day inhabitants of Prosperous are direct descendants of the first immigrants, and although the cult is no longer flourishing, its legacy endures.

The interior of the church is dominated by four faces, sinister foliate representations of the harvest symbol of death and rebirth known as the “Green Man”. Parker, who begins to see the face of this deity in every bare branch and twisted tree, refuses to believe the denials of the town’s chief of police, and the Selectmen take steps to ensure he will never return to Prosperous.

The Collector plays a crucial role, as, eventually, do Angel and Louis, but the star of The Wolf in Winter is the haunted, seething town itself, which, with its echoes of The Man Who Was Thursday , The Wicker Man and High Plains Drifter , is chillingly done; it is no kind of spoiler to reveal that it all ends in flames.

Equally well rendered are the scenes among the homeless of Portland. Connolly is at his very best here: angry, polemical and compassionate, with an acute eye for Jude, Shaky and Brightboy, their idiosyncrasies, flaws and virtues; the three references to Dickens throughout the novel are more than earned. The Wolf in Winter is a brilliant performance from one of our finest writers. I have high hopes for Connolly’s 17th.